Ewa Kracowska walks down a street in Bialystok with her uncle, his fiancee and her brother. 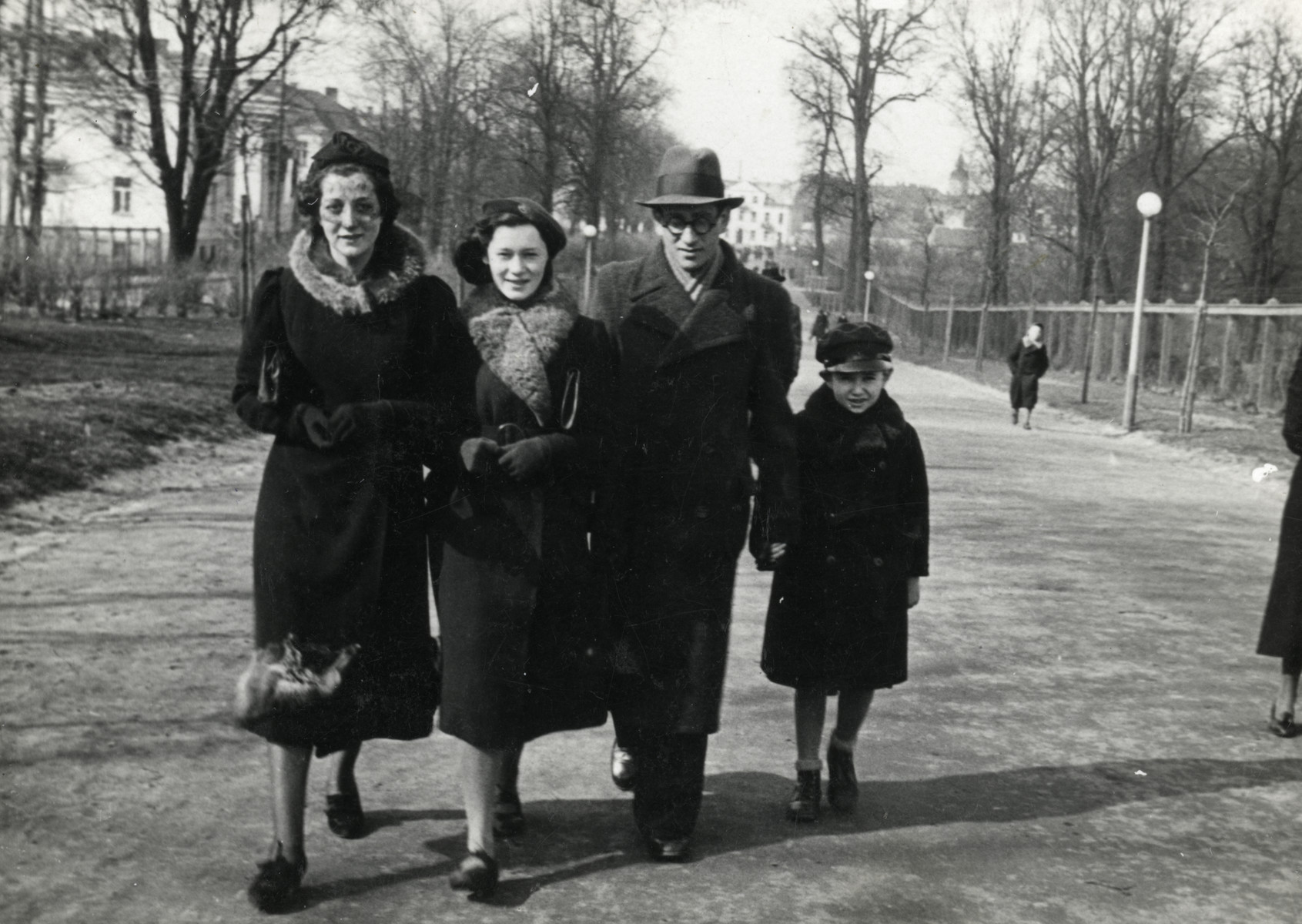 Ewa Kracowska walks down a street in Bialystok with her uncle, his fiancee and her brother.

From left to right are Bianca (fiancee of uncle who perished in the Holocaust), Ewa Kracowska, Israel Rabinovitch (later Meir), and Julik Kracowska.

Biography
Ewa Kracowska is the daughter of Dr. Samuel and Hainuwka nee Rabinovich Kracowska. She was born on December 18, 1925 in Bialystok where her father was an internist. He had studied medicine in Montpellier, France before returning to Poland. Her parents married in 1923, and her younger brother Julek, (Yoel) was born on 1930. Following the start of World War II, Bialystok was initially captured by the Germans but then ceded to the Soviet Union under the terms of the Molotov-Ribbentrop pact. The Soviets occupied it for the next twenty one months but on June 27th, a day that became known as "Red" Friday, Germany reoccupied the city.

Order Police Battalion 309 gathered near the Great Synagogue and, armed with automatic pistols and hand grenades, began killing the Jews in the streets. They locked at least 700 Jews in the synagogue and then set it on fire. Ewa's father was among those burned alive. Thousands of others were shot and killed. Then on August 1 the Germans established a ghetto in the city. Ewa, her mother, and brother received a room in the ghetto clinic. Ewa's mother worked in the hospital. Ewa, who was fifteen, worked in a textile factory making uniforms for the Wehrmacht. During the next year and a half, the Germans continued to murder and deport Bialystok's Jews. Ewa wanted to join the nascent ghetto underground but initially was rejected since she previously had not belonged to either the Shomer Hatzair or the Communist youth movement. However, the Communists eventually accepted her since they wanted the use of her room which was near the fence of the ghetto. Those wanting to cross to the Aryan side would wait in her room.

The underground wanted to send youth to the forests to join the partisans and also to organize a ghetto revolt. About 100 people succeeded in escaping the ghetto to join the partisans; the movement collected a small number of weapons and manufactured Molotov cocktails and homemade grenades in a cellar near the hospital. On August 16, 1943 additional deportation announcements were posted in the ghetto. Tens of thousands of residents made their way to the assembly point. They were told that they were being sent for work in Lublin but instead they were sent to Treblinka. Two of Ewa's friends, Moshe Lev and Eli Sirotkin, came and told her not to report for the transport. Julek, who was only ten, asked her not to leave. Her mother, however, told her to save herself. After meeting up with the group, Ewa assumed a combat spot near the Smolna Street wall together with about 80 members of the underground. The group had some 20 rifles and several Molotov cocktails. One fighter managed to throw a Molotov cocktail at an SS officer and wound him. Most of the fighters were shot and killed either during the battle or after the Germans discovered their main bunker.

Eli and Moshe fled with Ewa till they reached the attic of the tallest house in the ghetto. When they reached the top they found a few other youngsters hiding there; others were hiding elsewhere in the building. They remained there for ten days, escaping the searches of the Germans who found most of the other hideouts. In the evening they left the attic looking for food. There was no water or electricity in the house. Eventually the Germans found them, and one of them shot Moshe Lev in the leg. His wound became infected and though Ewa found some medicine for him, he died that night. Ewa and two young men remained in hiding from August 13 to November 1943 and then fled to the nearby forests. The Soviets liberated Bialystok on July 27, 1944.