The Joshua family stands outside the Jordanbad sanitorium near Biberach a few months after their liberation. 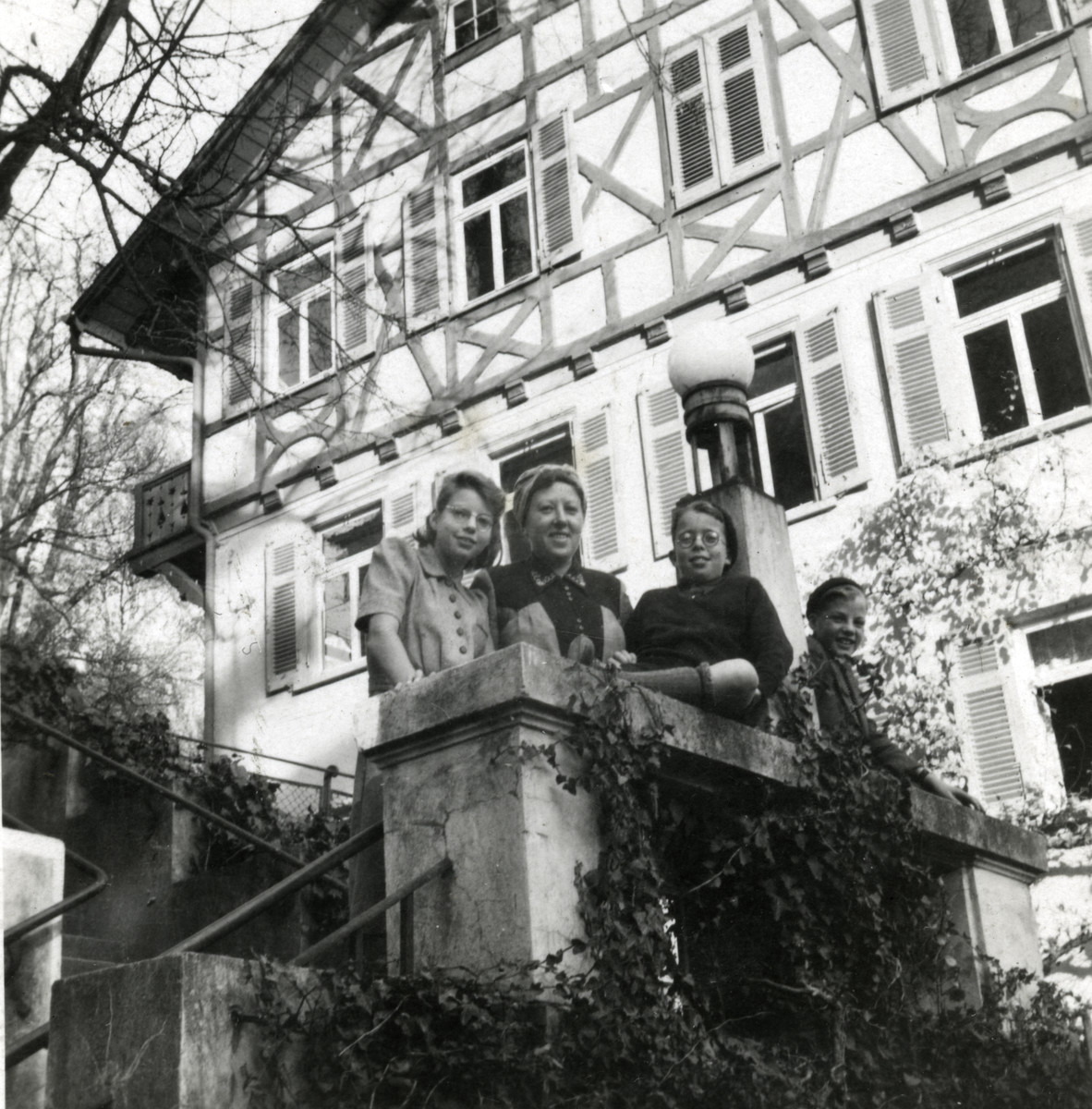 The Joshua family stands outside the Jordanbad sanitorium near Biberach a few months after their liberation.

The sanitorium Jordanbad was run by Franciscan nuns. It was requisitioned by the French occupying army to be used by the UNRRA for the convalescence of concentration camp survivors and displaced persons.

The photo was taken by Julius Peter Lunzer who was an officer in the Canadian Navy and the son of my mother's sister, Celine Lunzer who lived in Londen. He came to visit us in a resplendent uniform and lifted our spirits greatly. Besides Julius Peter Lunzer another son and two daughters of Celine also served in the British army.

Biography
Yaakov Jehoshua (born Jacob Joshua) is the son of Max Joshua born May 30, 1895 and Elisabeth (Elisheva) nee Eisenmann (b. October 27, 1902). He was born on February 16, 1932. His mother grew up in a large Orthodox, Dutch Jewish family; she was the youngest of eight siblings, all born in Antwerp. His father came from Hamburg. Jacob had an older sister Karin (b. Nov. 3, 1930) and a younger brother Henry (December 8, 1934). In 1937 the family left Hamburg for Switzerland, hoping to join Elisabeth's sister who had immigrated earlier. However, after Swiss officials would not allow them to remain in the country, they went to Holland to join the extended Eisenmann family. The Joshuas settled in Scheveningen, near The Hague on the coast. In May, 1940 Germany invaded The Netherlands. In 1941 the German occupiers decreed that any Jews who lived near the coast had to move farther inland. The Joshuas then moved to Utrecht where they remained for the next two years. Max initially could not get a work permit in Holland, but in 1942 all Jews were required to practice a profession. He then studied to become an optician at a school of the Jewish Council. While in Utrecht the family received Paraguayan passports that were sent to them from Switzerland through the intervention of Chaim Yisroel Eiss of the Agudat Yisrael. These certificates allowed them to move to Amsterdam in May 1943. However, one day Max was arrested, after being caught without wearing a Jewish star. The rest of the family was rounded-up shortly afterwards. They were brought the Jewish theater, and on June 5, 1943 they were sent to Westerbork. There they were reunited with Elisabeth's mother, Dina Eisenmann. They remained there until February, 15 1944 at which point they were deported to Bergen-Belsen. On account of their Paraguayan passport, they were kept with other foreign nationals in the so-called "Star Camp." The camp's name derived from the fact that these prisoners did not wear uniforms but instead kept their own clothing with Jewish stars. Four days after arriving, Elisabeth's mother, Dina Eisenmann passed away from disease. In Bergen-Belsen Jacob stayed with his father in one barrack, and while his mother and two siblings were sent to a separate women's barrack. They occasionally received packages from Jacob's paternal grandparents who were in Denmark. Though conditions were horrible and there was not enough to eat, they could observe Jewish holidays and the children attended informal youth groups. They had a Jewish calendar in Bergen-Belsen so knew when the holidays fell, and there were even two Torah scrolls in the camp. On January 16, 1945, Max Joshua died from malnutrition. Three days later the rest of the family were taken out of the camp. Through the Red Cross, Germany had arranged a prisoner exchange between foreign nationals and German civilians in Allied countries. All of the prisoners who were released had foreign passports or citizenship papers. Though they were supposed to go to Switzerland, at the last moment, Germans pulled the less healthy prisoners from the convoy and sent them instead to other camps in Germany. The Joshuas arrived in the Biberach camp on January 21, 1945. Jacob celebrated his bar mitzvah there the following month. Though Biberach was a German internment camp, conditions were superior to Bergen-Belsen. Though under the control of the Wehrmacht, it was self-administered by the prisoners, most of whom came from Guernsey and other Channel Islands. The British prisoners received Red Cross packages, which they shared with the new arrivals. The children attended classes held in English. The British internees helped care for the new Jewish prisoners and restore them to health. French troops liberated Biberach on April 23, 1945. Elisabeth and her children were offered an opportunity to return to Holland, but because all of her relatives had already died, she decided to stay in Paris near her older sister, Hannah Feist. Jacob studied in the Yeshiva in Aix les Bains while Henry went to the children's home Chez Nous. Elisabeth had wanted to bring her children to Palestine but could not obtain certificates. After being presented with an opportunity to come to America, she and the children immigrated to the United States in 1948 and Elisabeth supported her children by renting out rooms in their apartment in Washington Heights. In 1951 Jacob immigrated to Israel and joined a religious moshav. His mother and sister later also moved to Israel, while his younger brother remained in the United States.