A group of survivors stares at the remains of other charred prisoners in Klooga following liberation. 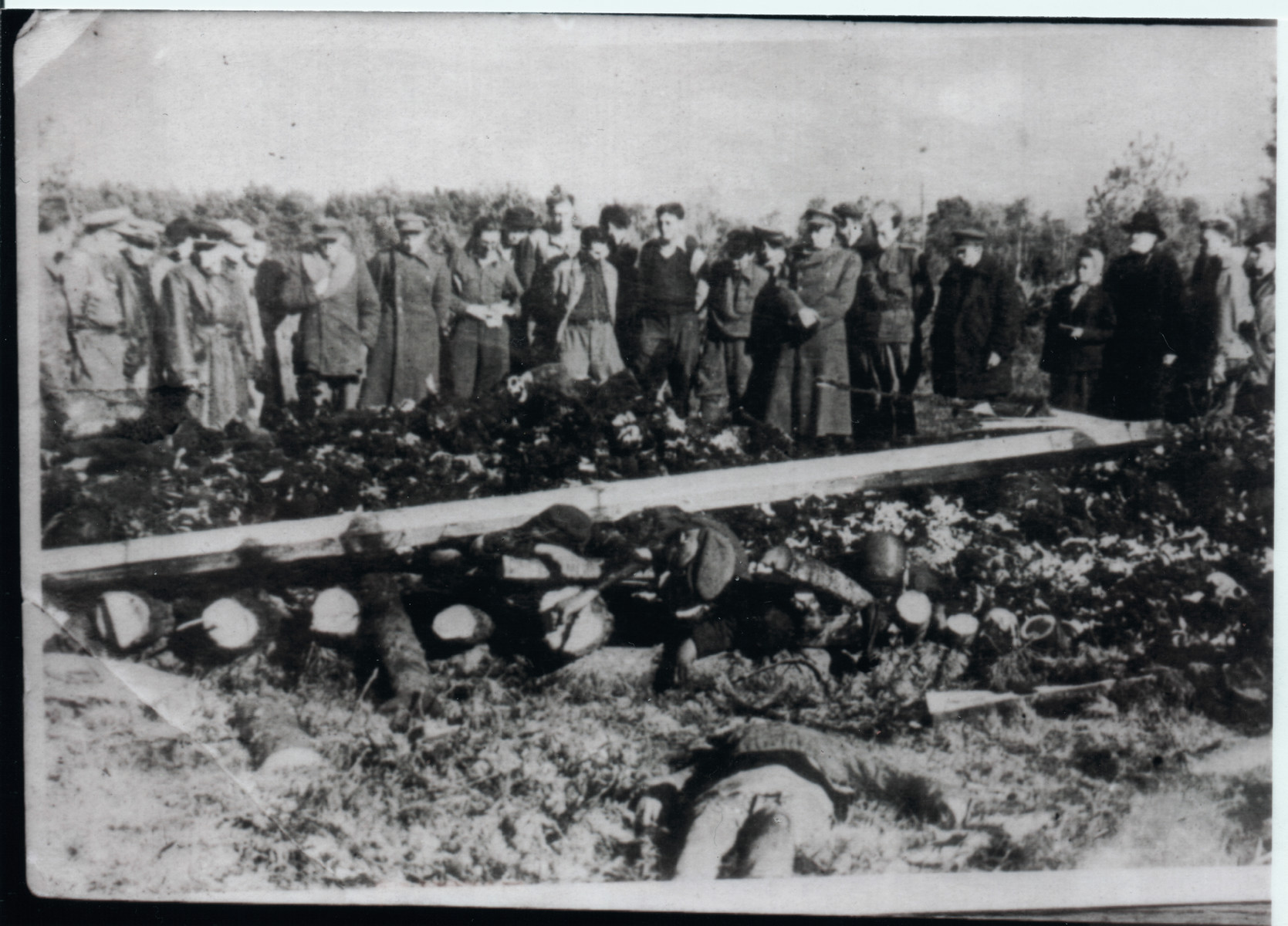 A group of survivors stares at the remains of other charred prisoners in Klooga following liberation.

Biography
Rae Gawendo (born Raja Axelrod, later Raue Fainwushevitz) is the daughter of Morris Axelrod and Rachela Gershowitz. Raja was born in Minsk, Russia on January 4, 1915; her younger sister, Rosa Axelrod, was born on May 18, 1922. When she was very young, Raja's parents moved to Bushowo, Poland. In addition to running a large working dairy farm, Morris Axelrod, was a music professor at the Conservatorium in Vilnius, Poland. He was a violinist and had trained at the Conservatory in St. Petersburg. Raja attended medical school in Vilnius. She met and married the young attorney Fajwusz Fainwushevitz, at the end of 1938. In June 1941 Germany invaded the Soviet Union. Raja's parents fled to the home of her maternal grandparents, Joseph and Genea Gershowitz, in the village of Maladzyechna (Molodechno); they were killed a few weeks into the German occupation. Her paternal grandparents, Wolfe and Rhoda Axelrod, lived on the farm in Bushowo with their daughter Fania. Soon after the German invasion, people from the area set fire to the farm, and they too perished. Raja's sister Rosa hid with a Christian friend, the Knopacki's. Eventually someone betrayed them, and she and her rescuers all were turned in and killed.
Raja and Fajwusz Fainwushevitz were still in Vilnius when the Germans invaded. Fajwusz, along with other Jewish professionals, was killed on the second day of the German occupation. Raja was taken into the Vilna ghetto, and in June 1942 she was transferred from the ghetto to the Klooga work camp in Estonia. There she mixed cement, harvested logs and prepared lumber. In September of 1944, the inmates of the camp were ordered to assemble outside of their huge barrack. Raja was standing in the second row from the back, close to the kitchen and the barracks. The guards chose eighteen of the strongest inmates and took them away in a truck. The other inmates soon heard shots, and then the Germans returned to chose more prisoners. It then became clear that they were going to shoot all of the prisoners. Raja moved back in line and to the side of the kitchen and then to the barracks where she smashed a window with a stone and climbed in. She quickly worked her way up to the next floor when she heard Germans speaking and coming down the stairs. She hid under the stairs and wasn't discovered. She then went to the top floor, stood on top of a bunk bed and tapped on the ceiling with a broom. She then got a chair and stood that on top of the bunk and reached the ceiling. Some prisoners, who already were hiding there, opened the boards and pulled her up to safety. About thirty-three people hid in the attic. They heard noise and shots until late at night and then it was quiet. Raja and another girl decided to check things out. An Estonian guard stopped them, but after Raja gave him a watch she had kept hidden, he released her. The other girl ran away. Raja hid under a bunk when German female SS troops entered the barrack and sprayed it with machine gun fire. Raja was shot in the buttocks. She turned over and laid her face in the blood. One of the guards stood on her back to check to see if she was alive. Raja held her breath until the guards left. She crawled to a pile of dead bodies, stuck a rag on her wound and waited. Many more people were shot and fell on top of her. When it became quiet, Rae slowly managed to free herself and return to the attic where her friends helped treat her wound. The next morning, they heard Russians voices and were liberated. Raja was taken to the hospital and given the SS quarters in Klooga. The German soldiers dug graves for the close to 20,000 who had perished. Only between 40 and 85 prisoners survived.
Raja returned to Vilnius to look for her family, only to be turned away by the Lithuanians who had taken over her home. In Vilnius she met Jacob Gawendo whose family had bought lumber from her parents. They married a few months later and headed west to Lodz, Poland and then into the Russian sector of Germany. The American Joint Distribution Committee and UNRRA snuck them over to the American section during the night. In the DP camp, Rae worked for UNRRA/JDC in the offices. A relative, who was serving as an American officer learned she was alive and made contact. Her uncle soon sent papers. She and Jacob came to the United States in 1947 and stayed in Queens for a while until they purchased a chicken farm in Moosup, Connecticut. They ran the farm from 1948 to 1973 and raised a family.