Children in the Ferramonti internment camp pose in their costumes for a play of Snow White written by Hella Mayer and performed in the camp. 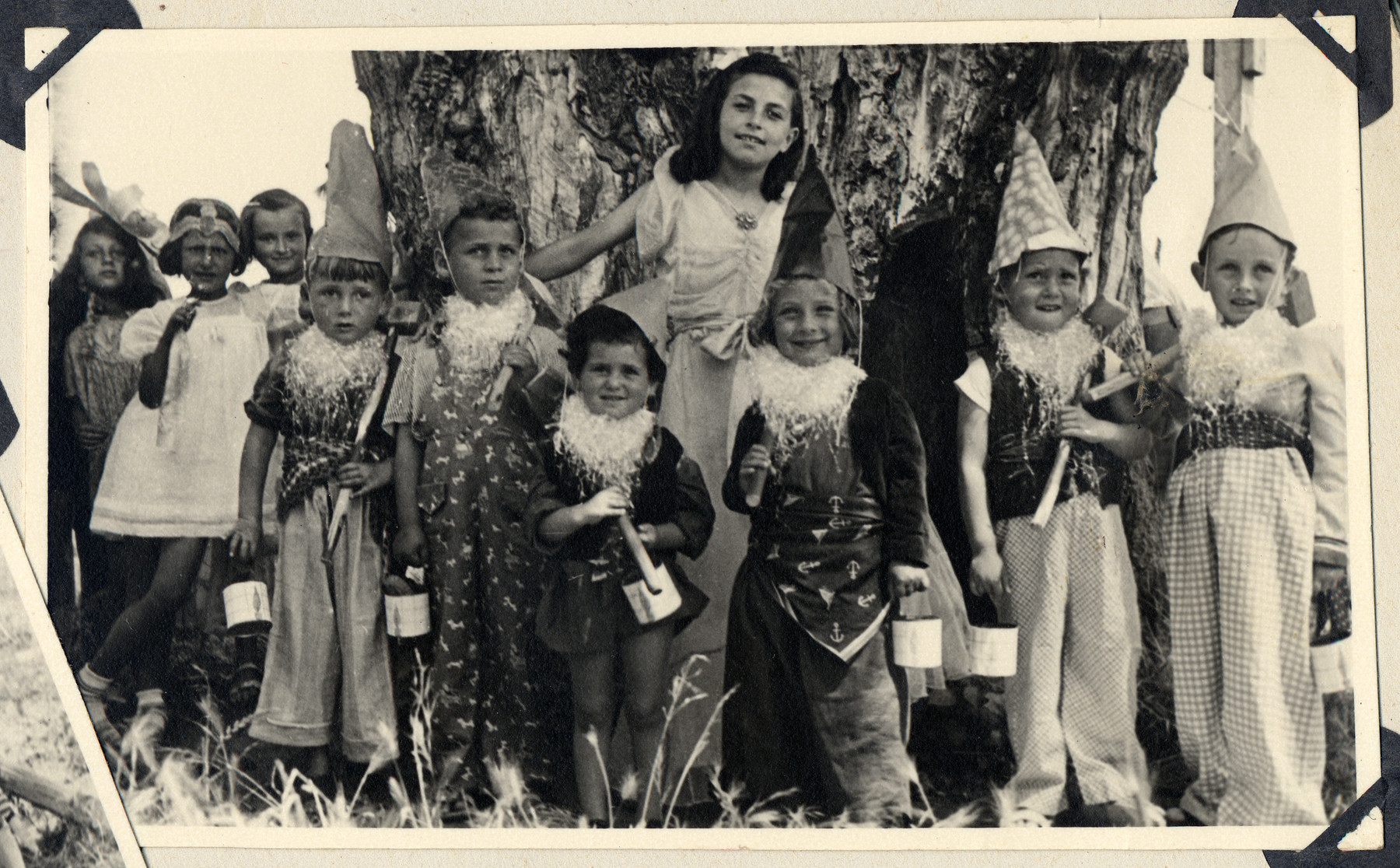 Children in the Ferramonti internment camp pose in their costumes for a play of Snow White written by Hella Mayer and performed in the camp.

Biography
Miriam Gery (born Astrid Mayer) is the daughter of Dr. Richard Mayer (b.9/16/1897) and Helena (Hella) Weiskopf (b. 6/30/1915). Astrid was born on January 20, 1939 in Novi Sad, Serbia where her father was an attorney and his family owned a foundry and factory. In 1940 Hella's parents and brother immigrated to Palestine. They also had Palestinian visas but before they could Germany attacked Yugoslavia on April 6, 1941. Astrid and her parents fled in advance of the front in the hope of getting to Palestine, but this was not successful and after a short while they returned to Novi Sad. However they could no longer remain in their own home and needed to find a place to stay. They ended up going to the factory owned by Richard's father. After a short while Richard was arrested and taken to prison on the charge that there were irregularities with the company's bookkeeping. Since his father was out of the country, the police charge him. Richard was exonerated and released after a few weeks, but the following month was conscripted for forced labor. Conditions were very harsh, and on one occasion Richard was forced to witness a mass hanging. Yet, he was allowed to return home at night where he enjoyed vestiges of his former life. The on January 21-23, 1942 Hungarian gendarmes began going house to house rounding up Jews in Novi Sad. Over 1400 Jews were shot on the banks of the Danube during that two day period. The Mayers survived by mere chance; they were to be among the last to be rounded up. On the evening of the 23 the government in Budapest cabled Novi Sad and ordered the killings to stop. After the massacres, the Mayers fled to Budapest and remained there for six months still hoping to find a way to get to Palestine. Richard then was told to report for forced labor, so he decided to flee again, this time to Italy. However, he needed proof of Christian ancestry to be admitted to Italy, so Richard decided to return to Yugoslavia to obtain false papers. Counter-intuitively he went to Zagreb figuring he would be safest in a city that was officially free of Jews. Hella joined him later. After Richard purchased false papers and plane tickets, the family flew to Italy. However, after they landed in Venice, they immediately were arrested since the Italian police spotted the false papers. Hella was allowed to remain in a hotel with Astrid, but Richard again was sent to prison. However the Italian police were sympathetic and not only allowed Hella and Astrid to visit, but also allowed Richard to visit them in the hotel as well. Richard was freed after one month. Though they enjoyed their time in Venice, they were warned that they would be safer in a town with fewer Germans so they moved to the village of San Donna di Piave. Eventually though the government realized they were Jewish and took them to the Ferramonti internment camp. Though conditions in the camp were Spartan, the internees were permitted to establish a full array of cultural activities. They were not permitted to leave the camp, but the guards did not regulate day-to-day activities. Hella wrote theater plays based on fairy tales for the children to perform. On December 4, 1943 American British and Jewish Brigade soldiers liberated the camp. The Mayers then realized that their internment may have saved their lives since at about the same time the Germans began the deportation of Jews from Venice. Following liberation the Mayers began to make their way to Palestine. They traveled first to Egypt where they spent over a month in a British immigrant tent camp and finally arrived to the home of Richard's parents in Jerusalem on May 14, 1944.