A bugler plays taps at a memorial service for the 243 slave laborers who were shot by their guards on the railway lines at Lueneburg on the way to the Belsen Camp. 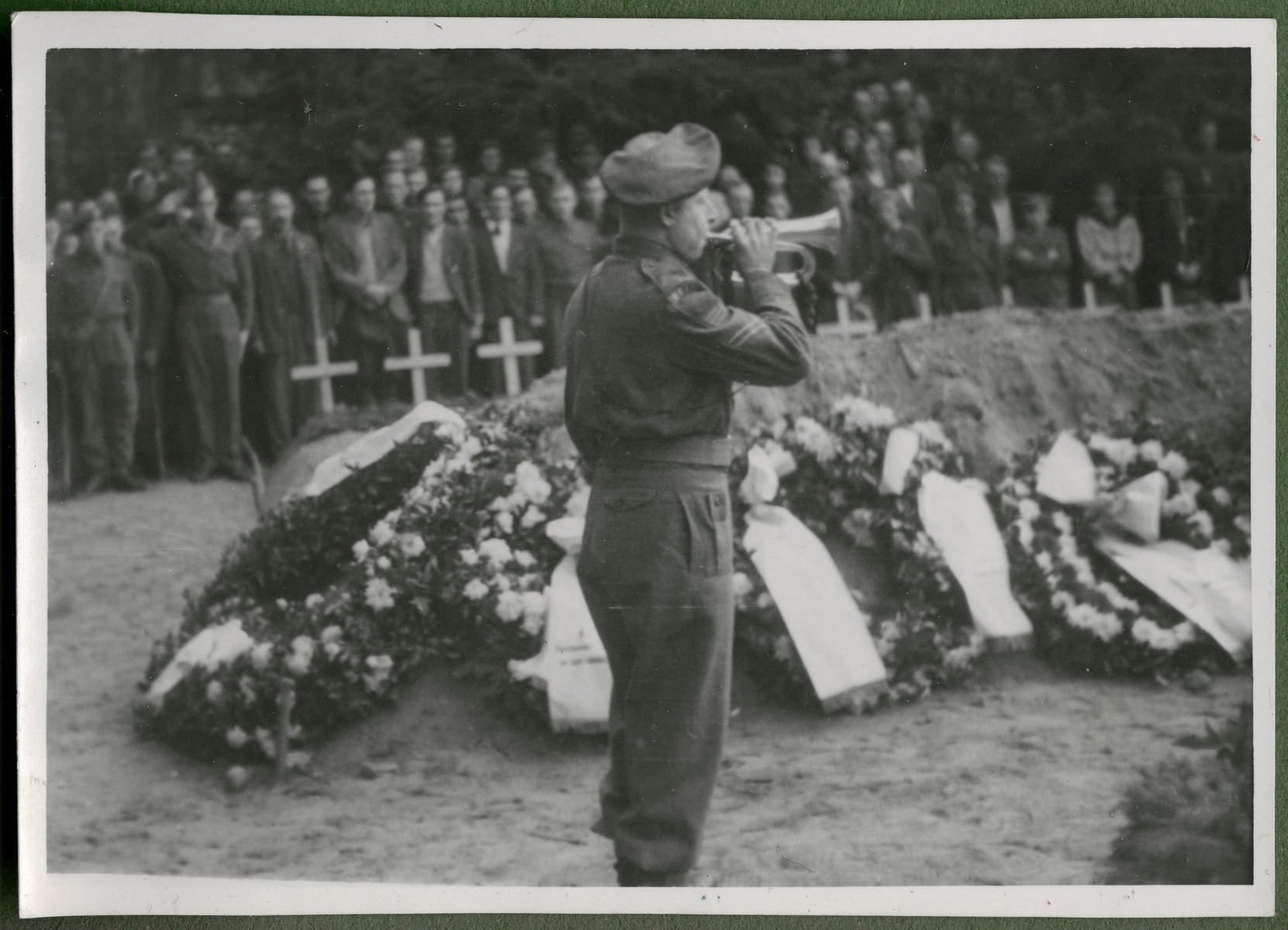 A bugler plays taps at a memorial service for the 243 slave laborers who were shot by their guards on the railway lines at Lueneburg on the way to the Belsen Camp.

Biography
Marcel Frank (the grandfather of the donor) was the son of Guillaume Frank and Elisa Lazare. He was born on August 1, 1897 in Celle Saint Cloud, outside of Paris. The family lived for some time in England, but Marcel mostly lived in Brussels, Belgium. His father was a violinist and stockbroker, and Marcel also became a stockbroker. He and his father took the train from Brussels to Antwerp every day to go to work. His father died just before World War I. Marcel volunteered to serve in WWI despite his mother's fear that she would lose her only living child. After his right arm was wounded, Marcel returned home and when the war ended, he resumed his activities as a stockbroker. He met his future wife, Renee Moniquet on the tennis courts in Belgium. Marcel Frank converted to Catholicism to please his future wife's family and they married in 1925 in the Eglise de l'Annonciation in Ixelles. Their daughter Jacqueline was born on November 28, 1926. The family lost a lot of money during the depression, and though they kept their home, they maintained a modest life style. In May 1940, when the German army invaded Belgium, the Franks tried to flee to England through Normandy. They were turned back by the Germans and sent back to Brussels. It is unclear whether or not Marcel Frank was registered as a Jew or whether he had to formally go into hiding. However, it seems that though he did not wear a Jewish star, he also did not leave their apartment during the years of occupation. His mother, Elisa Frank, was placed in a home for the elderly and died of a stroke before the end of the war. Jacqueline studied art at the Academie des Beaux-Arts in Brussels and assisted the underground. She transported resistance flyers in the bottom of her paint box. After Brussels was liberated, Marcel insisted on signing up for military service, despite the fact that he was already 47 years old. He joined the British army as a Belgian liaison officer. He was with the army when it liberated the Bergen-Belsen concentration camp and when it uncovered a mass grave in Lueneburg. He also assisted with the repatriation of Belgian survivors and care for displaced persons in the Lueneburg displaced person camp and served as a translator in the Nuremberg Trials. Marcel Frank died on November 14, 1946 in Bedburg German in an automobile accident while returning home for his daughter's birthday. He was buried in a Catholic ceremony. A year and a half later, his body was taken to the military honors section of the Brussels cemetery in Ixelles. He was posthumously named Chevalier de l'Ordre [du roi] Leopold II.