The Loebl family walks through a park in Bamberg. 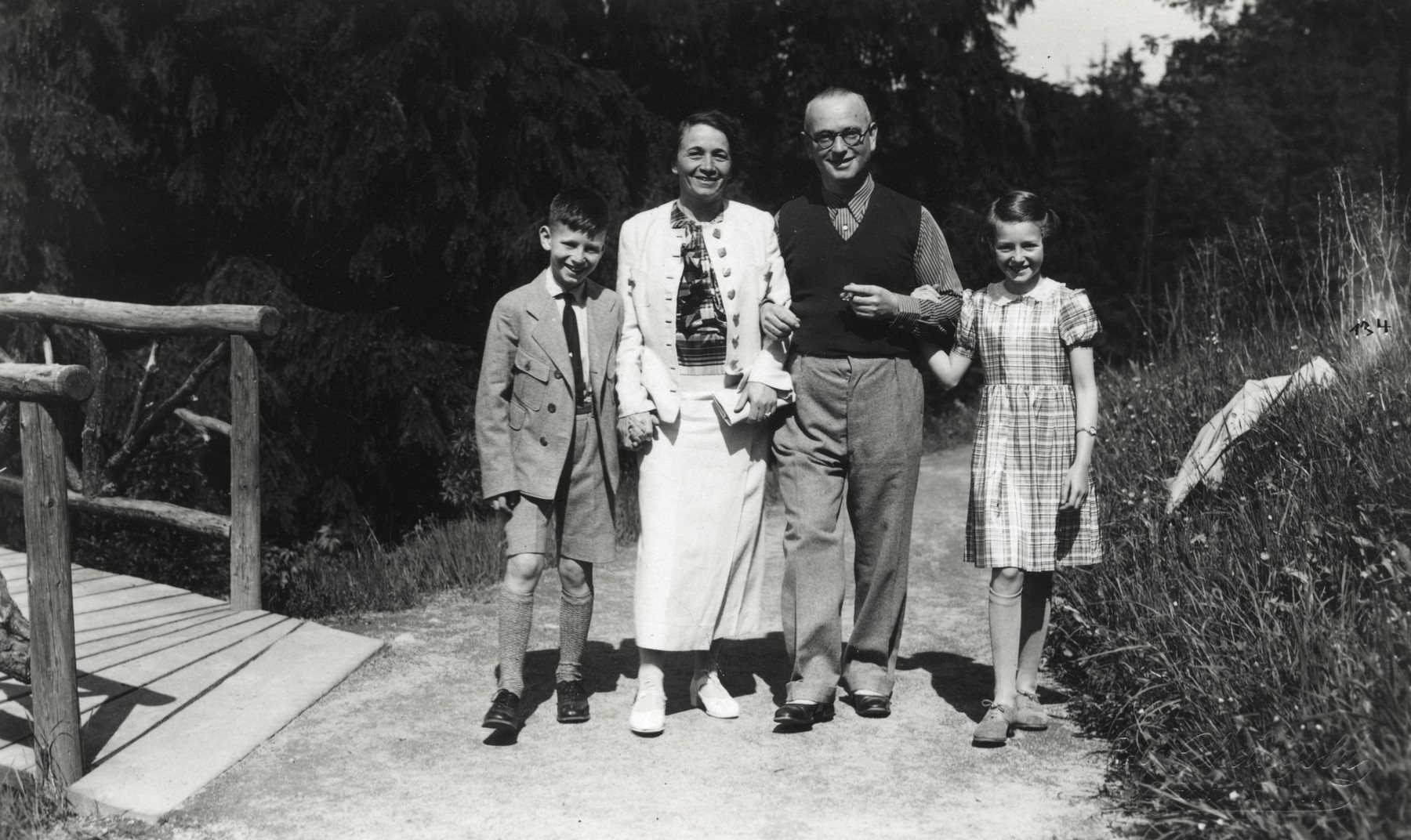 The Loebl family walks through a park in Bamberg.

From left to right are Werner, Frieda, Sally and Erika Loebl.

Biography
Werner Loval (born Werner Loebl) is the son of Solomon (Sally) Loebl (b. November 4, 1890 Bamberg) and Freidl (Freida) nee Aufhauser (b. July 6, 1892, Augsburg). He was born on April 27, 1926; his sister, Erika was born on August 7, 1924. Hugo Loebl, Werner's grandfather moved from Sanz to Bamberg at the age of 24. After first establishing a small clothing store, he founded an agency to sell gas lamps which soon expanded to include electric lighting fixtures in their early stages of development. In 1917 the business had grown, and new premises were required. Hugo Loebl bought a five story building on Luitpoldstrasse which consisted of four apartments one of which was occupied by Hugo and his family. In the back was a commercial area from where the business was run. In the early 1930's Jews felt secure in Bamberg. Hugo's sons all fought in WWI and worked in the business as well. The business expanded in other areas as they began to manufacture electrical installation material, pioneering the use of a new material, Bakelite.

Sally studied in Bamberg's gymnasium until the age of 16 and then was apprenticed to the private bank of A.E. Wasserman in Bamberg and eventually went into business with his father. In 1929 Hugo passed away from a heart attack, and Sally became the sole owner of the wholesale business which had grown to be the biggest electric supply company in Bamberg and the surrounding area.

Werner's grandparents, parents and uncles kept traditional Jewish households. They were active members of the Jewish community; Sally participated in the synagogue choir from 1922 -1938 and served on the committee of the Jewish Cultural organization, the Jewish Youth Club, and the Bamberg branch of the Hilfsverein. In 1937 the Bamberg chapter organized two lectures on emigration, but Sally did not consider his family's own emigration urgent. Ironically this organization helped 90,000 German Jews emigrate, but by the time Sally pursued his own needs visas had become much harder to obtain.

Werner attended four years of elementary school and in 1936 was accepted to the Catholic Neue Gymnasium. There were 18 Jewish students in the school; although Werner was the only one in his class. He recalls only one teacher who was openly antisemitic, but the school rector was sympathetic towards Jews. That same year all Jewish children in public elementary schools were expelled and and Jews could not longer attend public events. Instad, the renovated Weiss Taube (W.T. or White Dove Inn) became the focus of Jewish activities. In 1938 life became increasingly difficult for Jews. Banks could no longer issue credit to Jews and businesses had to be registered. Public enterprises could no longer buy from Jewish firms. On the night of November 9, 1938, the notorious Krstallnacht pogrom broke out throughout Germany . On November 10th Werner and his sister were expelled from school. Their father was taken to the Bamberg jail and from there sent to Dachau for three weeks. He was then forced to "sell" the family wholesale business.

With the help of family friends and cousins, Erika and Werner were sent on the Kindertransport to England in June 1939. Werner had just celebrated his Bar Mitzvah on May 13, 1939. They drove to Wurzburg where they parted from their parents and then boarded the train to Bremen and the SS Europa out of Nazi Germany. Throughout this period Erika kept an extensive diary containing inserts of current events, newspaper clippings, concert programs, picture postcards, photographs and even the cable that was received at their school in England with the news that their parents had left Nazi Germany on August 1, 1940. Their parent's escape took over a year of constant efforts. They crossed the border into Russia at the height of the war on August 1, 1940. By the time the children received the news their parents were on the Trans-Siberian railway from Moscow to Vladivostok and then onto Japan, Hawaii, California and Mexico as well as Panama. Their final destination was Quito, Ecuador.

Not all of the family, however, succeeded in leaving Europe. Werner's grandmother Lina Loebl was deported in September 1942 to Theresienstadt and from there sent to Minsk where she was murdered two weeks later. Sally's brother Leo and his wife Gisela, who had moved to Katowicz, were murdered as well, possibly in Auschwitz or Belzec after having been deported to the ghetto in Bedzin.

Meanwhile, Erika and Werner were sent to the New Herrlingen School in Bunce court, Kent. The school had been founded in Germany in 1926 by Anna Essinger. In July 1933, Mrs. Essinger felt the need to leave Germany. With the help of some friends she moved her school to Britain and in September of that year, 65 German children followed. Her motive was to create a continuity of the children's cultural identity in a warm and welcoming environment. Emphasis was on cultural subjects, including Germany poetry, art and culture. At the age of 16 in May 1940, Erika was told that by the Children's Committee that she was too old to continue her schooling and needed to learn an occupation. On May 10, 1940 the German army invaded France, Belgium and Luxembourg as well as the Netherlands. In June 1940, the school moved to Trench Hall (Shropshire) where she began some practical work in addition to her schooling.

Once Sally and Frieda arrived in Ecuador, they focused on reuniting their family. Werner was still studying in Bunch Court, and Erika had become an assistant teacher in Loughton, Essex. In the summer of 1942, Werner and Erika received word that they were booked on a British freighter from Glasgow to Buenos Aires from where they would continue by land to Valparaiso, Chile and then to Ecuador. On August 26th they arrived in London in order to obtain the documents they needed to leave England. Since they were officially stateless they each obtained a laissez-passer from the British government. They sailed on August 29, 1942 on the Dunster Grange, one of a convoy of 30 ships, protected and escorted by British warships. The month spent at sea was precarious and the freighter was attacked by German submarines but not hurt. On September 29, they docked in Buenos Aires and from there proceeded on a precarious journey to Valparaiso across the Andes where they were met by their father once they reached Guayaquil, Ecuador on October 16, 1942 to be reunited later with their mother. Life in Ecuador was a challenge as their parents could not take any funds out of Germany. Sally became a partner in a raincoat-manufacturing business as it rained frequently in Ecuador and there was an abundance of rubber in the country. Until then raincoats had been unknown there. They rented a comfortable house, and Erika began taking care of young children, eventually opening up her own kindergarten. She was also elected beauty queen of the Jewish community of Quito. Werner had several jobs. He first worked for a pharmaceutical company established in Quito by Italian Jewish scientists, then for a metal works company founded by a German Jewish refugee and later for a South American Trading company. In November 1944 he became an English correspondent for the U.S. military mission in Quito.

On June 6, 1944 Sally died suddenly of a heart attack. The following year, the rest of the family decided to move to the United States to join relatives in New York, arriving in September 1945. Werner obtained a job at a textile firm managed by a German refugee from Bamberg who once worked for his father. In 1946 he was drafted into the army, and with the help of the his previous employer, the officer commanding the U.S. Military Mission in Quito, he was assigned to work in the headquarters public relations office of the U.S. Caribbean Defense Command in the Panama Canal zone. Erica, in the meanwhile became engaged to a young man that she met through mutual friends of their parents.

After his discharge from the U.S. army, Werner started to work with the Israeli delegation to the U.N. in 1949. From 1951 to 1954 he worked at the Israeli embassy in Washington, and in 1954 moved to Israel to work for the Israel Foreign Ministry in Jerusalem. While working at the Foreign Ministry, he also initiated the building of the Nayot neighborhood near the Israel Museum in 1959, with apartments designed mainly for immigrants from English speaking countries. His diplomatic career later took him to the Israeli embassies in Guatemala and the Central American countries, and in 1963 he was appointed charges d'affaires at the Israel Embassy in Mexico.

In 1956 he met and married Pamela Sabel, a young woman who had immigrated to Israel from England. They have four children and twelve grandchildren. Werner was active in the founding of the Reform Synagogue Harel in Jerusalem, was President of the Association of Americans and Canadians and was the founder of Anglo-Saxon, the first country wide real estate agency in Israel with 60 branches throughout Israel. His long and healthy life he attributes to his happy marriage. Werner was also appointed Honorary Consul of Guatemala in Jerusalem and in 1999 was made Honorary Citizen of Jerusalem.