Camille Spira poses with her four children after crossing the border into Switzerland. 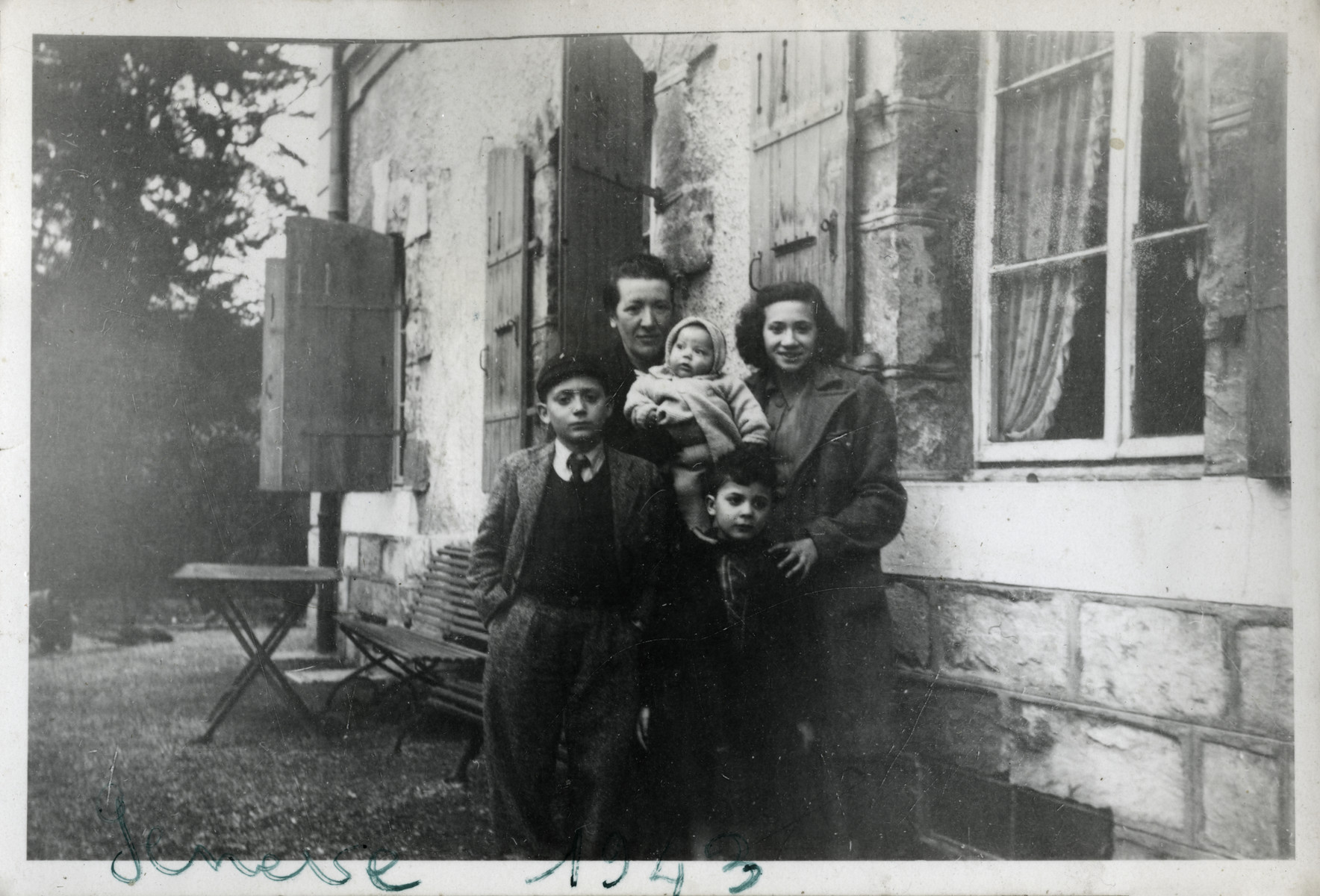 Camille Spira poses with her four children after crossing the border into Switzerland.

Biography
Robert Spira is the son of Eduard Spira (b. Nov. 2, 1897) and Camille Abusche (b. Oct, 1904). Eduard and Camille both were born in Krakow, immigrated with their families to Belgium and then moved to Paris. They met and married in Paris. Camille's parents owned a kosher delicatessen restaurant in Antwerp, and Eduard's father was a diamond dealer. Robert was born May 1, 1938 in Paris, France where his father was a mechanic and had a cash register company. He had two older siblings Annie (b. April 7, 1928) and Max (b. Nov. 7, 1933) and a younger brother Serge (b. Oct. 5, 1943). Eduard wanted to assimilate. The family was not religious but attended synagogue every Friday.

In May, 1940 Germany invaded France. For the first two years the Spira family remained in their apartment. They lived in the 21st arrondissement and were the only Jews in their building. The Spiras were not arrested during the large round-up July 16 and 17, 1942 since it took place mainly in the Jewish quarters. However a few days later a policeman presented himself at their apartment at noon. As Eduard was not at home, the policeman told Camille he would return later in the afternoon. During this period of austerity the family kept a chicken on their balcony in order to provide them with eggs. When another lone policeman returned at 5:00 with their deportation order the family did not know what do with the chicken so they gave it to the concierge. They were taken to the Ecole Maternelle where civil policemen registered the names of the Jews; each one had a wooden box with the names. An officer took out the card for the Spiras and told them they were supposed to have reported at noon. Since this was a different transport, he released the family. When the concierge saw the family return she was taken aback as she had already cooked their chicken.

After this experience, Eduard realized it was too dangerous to stay in Paris, and the family left for a small village near the Chateauroux. On November 16, 1942 they registered as Jews. The following year, on February 24, 1943 at 5:00 a.m. Eduard was arrested by the gendarmes. He spent the first night at the police station in Leroux near Chateauroux. The next few nights he spent in Nexon near Limoges. The family received a post card on February 27, 1943 which he sent from there. On March 6, 1943 he was sent to Drancy along with 926 men, some transferred from Gurs and others from Nexon. They were put on Convoy 51 to Auschwitz. The family received another postcard which was dated on March 27th which according to the donor was an error on the part of his father as he was no longer alive on this date. Due to the extraordinary number of trains arriving in Auschwitz a telex reached this convoy telling them to hold the transport. Eduard and eight other men were taken off the train and sent to Sobibor and then to Majdanek. Robert's father was never seen again.

Robert and his mother, brother and sister remained in Chateauroux where Max and Annie attended school. They were obliged to wear the yellow star on their jackets in class but no one paid much attention to this. Their mother concealed hers with a shawl. Robert's mother was one month pregnant. Soon after Eduard's arrest, the mayor's secretary, who was an acquaintance of the family, received a letter warning the family that they would be arrested so they left for Aix-les-Bains. Camille rented a room in Viviers, which was five kilometers from Aix and waited for the birth of her baby. Serge arrived on October 5, 1943 in the hospital of Aix-les-Bains.

Two months later on December 5, 1943 (which Robert recalls as the coldest day of his life), Camille hired a smuggler to take them over the border to Switzerland. She had sold some jewelry and gave half of the profits to the smuggler and promised to pay the other half upon arrival. The family left after breakfast with small suitcases they soon abandoned. They wrapped the baby Serge in newspapers covered with oil to protect him from the cold and taped his mouth shut. The river Rhone was frozen; the family walked for many hours until they could go no further. The smuggler told them to remain there for the night and he would return the next day to continue the journey with them. They feared they had been abandoned, but he returned the next morning and marched with them again until they arrived at a hill near the border. In the distance they saw a soldier who they assumed was German but turned out to be Swiss. They approached them, and the soldiers picked up the barbed wire allowing them to crawl underneath. They gave them hot tea and Swiss money for the train to Geneva. In Geneva they were sent to the refugee camp Bout du Monde. Camille and Serge remained there, but Robert and Max were sent to a Protestant village Le Chavaliere. They spent the next eight months in a boarding school run by a German Jews; conditions were terrible and punishment severe if one did not obey orders. Annie, who had a bad case of scoliosis, was sent for an operation in Lausanne and then stayed with a Protestant family to recuperate who had twelve children of their own.

After the war ended the family remained in Switzerland until 1946 until they had the funds to return to Paris. They lived with Camille's mother until they received an apartment from the government. Robert became an antique dealer and had a store in the famous French flea market. He later immigrated to Israel some ten years ago and has two sons; one living in Israel; one in France.