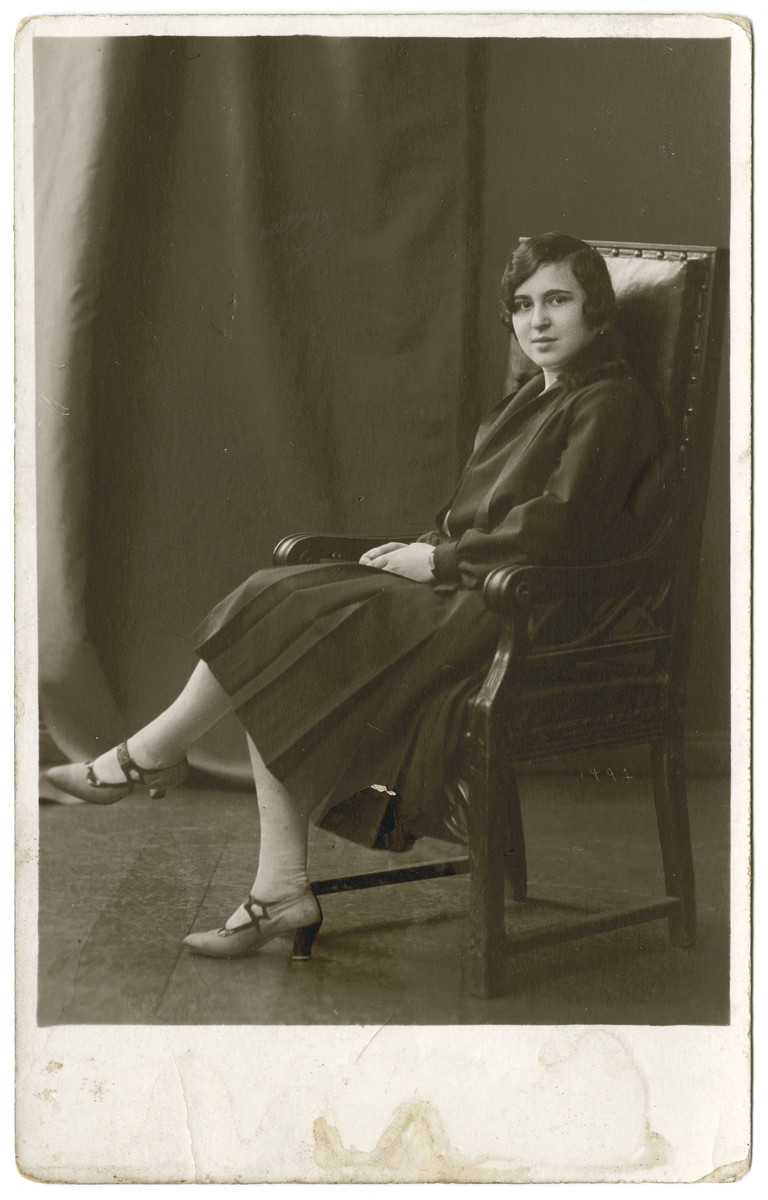 Biography
Bertha Schwarz (born Bertha Teitelbaum) is the daughter of Usher (Asher) Teitelbaum (b. in Nowy Sacz in April 26, 1910) and Dora nee Ksias (b. Cologne Nov. 4, 1910). Usher Teitelbaum was born to Eliezer Stamler and Rivka Teitelbaum. His family immigrated to Belgium in 1925, and his father Eliezer died shortly afterwards of natural causes. Usher was the youngest of seven siblings, and all of the men worked in the diamond trade. Dora Ksias was the daughter of Yechiel and Leah Ksias of Cologne, Germany. Usher and Dora became engaged in 1931. They married following year and Dora joined him in Belgium. Bertha was born on January 10, 1933 and grew up in Antwerp, Belgium. She has two younger sisters, Malka (b. 1936) and Bella (b. 1937). In 1936 Bertha went to live with her maternal grandparents in Cologne for a half year at the time of the birth of younger sister. Her maternal grandparents later fled Germany and joined the family in Belgium.

Following the May 10, 1940 German invasion of Belgium, the Teitelbaum family fled from Antwerp to France. However soon after arriving, they were arrested and sent to the Brens internment camp. They managed to escape and went into hiding in Orgeuil. However, Usher was again arrested and sent to a Septfonds. Bertha visited him once while he was in camp. One day Rabbi Rene-Samuel Kapel came to their home and warned Dora that they risked imminent capture. Bella was quite sick and couldn't leave. Therefore Dora sent her older daughters off on their own. She brought them to a bus station and purchased one-way tickets to Montauban. She told them to find the office where the family had obtained false papers the year before and that someone would meet them there to bring them to Marseilles. They arrived to find the building closed, but a man approached them and told them he was looking for them. The stranger accompanied them to Marseilles. When they arrived, the French police checked their papers and the girls to identify the man. Bertha answered he was their father. The police noticed that he had a different name and arrested everyone. The girls never learned his real name or his fate. Bertha and Malka were taken to the Hotel du Levant, a holding place for women and children slated for deportation. Conditions there were very bad. The one day two yeshiva students called for the girls by name. They told them that the Chabad rabbi, Rabbi Zalman Schneerson (Chneerson) had told them to bring the girls to his home, the Chateau de la Vielle Chapelle, in Marseilles. Rabbi Schneerson was the founder of the A.I.P. (Association des Israelites Pratiquants), the association of Orthodox Jewry in France. With the assistance of the OSE, he established religious children's homes to save children from deportation. His home was strictly orthodox and followed Chassidic traditions. The yeshiva boys who had brought the Teitelbaum sisters out of the camp, served as teachers. Rabbi Schneerson had permission to keep only 60 children so when gendarmes came to inspect the home, the older children and yeshiva students had to hide in a nearby forest. About a month after Bertha arrived, her younger sister Bella joined them in the home. After months of not knowing what had happened to their mother, Bertha received word that she was hiding and working for a maid. Another letter said she was with her Aunt Pepi where she was hiding in the attic. After the Germans took over southern France in 1942, Rabbi Schneerson no longer felt safe in Marseilles and moved the home to the Chateau de Seignebon outside of Demu. One Shabbat morning Rabbi Schneerson summoned Bertha to his office. To her surprise, she found her mother there. Dora had walked several kilometers in order to spend a few hours with her daughters. Though she could only remain with her children for a short time, after leaving the home, she began planning a way for all of them to escape France. A few months later the girls were sent to their mother in Megeve, close to the Swiss border. On September 4, 1943, they crossed into Switzerland illegally. Dora was sent to a refugee camp in Morgins, and Bella went to a children's home nearby. The older girls were taken to the Institut Ascher, an Orthodox boarding school in Bex les Bains. After the war, in 1945 all of them returned to France to prepare to immigrate to Palestine. In the beginning of September they sailed for Palestine on board the Mataroa and arrived on the first day of Rosh Hashanah, September 8, 1945.

Though Bertha, her mother and sisters survived, her father, all of her grandparents and much of her extended family perished in the Holocaust. In the summer of 1942 Usher (Asher) Teitelbaum was arrested and sent to an internment camp, Septfonds. From there he was deported to Drancy and then sent to Auschwitz on August 25, 1942 on Transport 25. His mother Malka Rivke Teitelbaum was deported from Malines to Auschwitz in 1942. Bertha's grandparents Yechiel and Leah Ksias had escaped from Cologne Germany and went into hiding in Lacaune. They were caught, arrested and sent to the Camp of Saint Sulpice-la-Pointe. Yechiel and Leah Ksias were deported to Drancy and from there to Auschwitz on September 9, 1942 on Transport 32.