Josiane Aizenberg accepts a citation on behalf of her mother for her assistance to Solidarite, the Belgian resistance. The ceremony took place before her mother Fanny returned from Auschwitz. 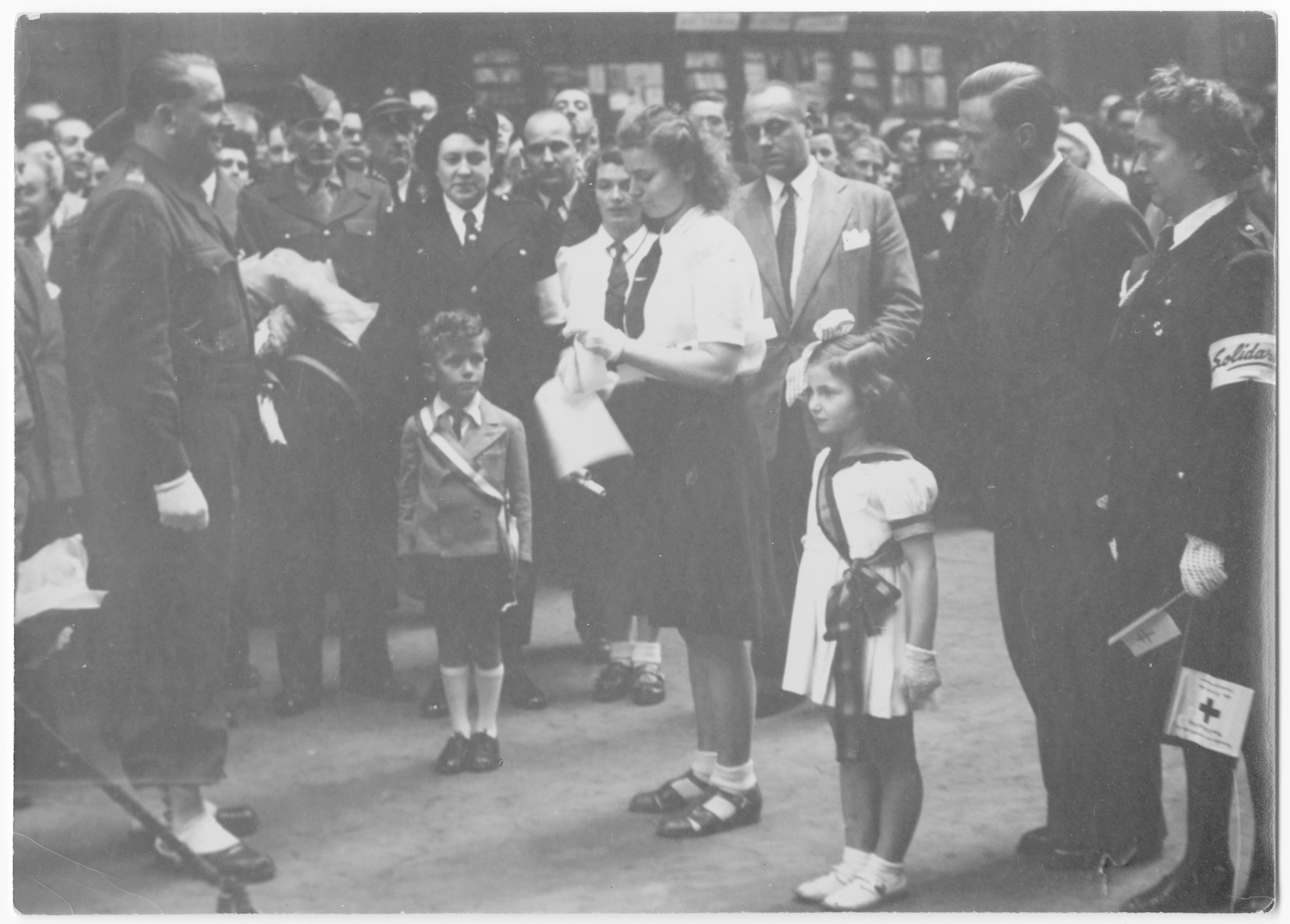 Josiane Aizenberg accepts a citation on behalf of her mother for her assistance to Solidarite, the Belgian resistance. The ceremony took place before her mother Fanny returned from Auschwitz.

Biography
Fajga (Fanny) Orenbuch Aizenberg is the daughter of Benjamin Orenbuch and Rivke Leah Aspis Orenbuch. She was born on December 3, 1916 in Lodz Poland as were her two sisters Terese (b. 1911) and Rose (b. 1921). Shortly after Rose's birth, the family moved to Brussels where her father worked for the Yiddishe Gemeinde which coordinated Jewish religious activities in Belgium including kashrut, ritual slaughter, and the Chesed Shel Emet, the Jewish burial society. Her mother also volunteered for the society as a "shomer," maintaining vigils over the bodies of the deceased. The family was strictly Orthodox, but the girls attended Belgian public schools. Fanny went to elementary school, lycée and a three year college where she studied dress-making and design. After graduating she worked for the Royal House doing art and design. She met Jacques (Itzchak) Aizenberg. Jacques was born in Radom, Poland in 1904 and moved to Belgium as a young man. Though he was trained as a violinist, he supported himself working as a tailor. In 1938, in response to the Kristallnacht pogrom, the Yiddish Gemeinde arranged for Jewish families to take in refugee children from Germany and Austria. Fanny's parents also sheltered a child for the next two years. On May 19, 1938 Fanny married Jacques Aizenberg, and one year later, on March 21, 1939, Fanny gave birth to a daughter whom they named Josiane. The following year, on May 10, 1940 Germany invaded Belgium, and Jacques heeded the call of the RAF asking for Belgian volunteers to work for the British air force. In 1942 Germany began the round-up of Belgian Jews. Fanny's father, Benjamin Orenbuch, was arrested almost immediately along with other rabbis and Orthodox Jews and sent to Breendonck. There he was beaten, tortured, and then transported to Auschwitz where he perished. With the help of the Belgian resistance, Fanny arranged to hide Josiane in a Carmelite convent, while she remained in Brussels with her mother. For security reasons, Fanny was not told where her daughter was hidden. Fanny and her sisters all became involved with "Solidarité," the Belgian resistance group, and Fanny worked distributing leaflets. In 1943 someone denounced Fanny to the Germans, and she and her mother were arrested, kept overnight at Gestapo headquarters and then taken to the Malines transit camp. From there they were transported in a cattle-car packed with 110 people to Auschwitz. When they arrived in Auschwitz, Fanny and her mother were instructed to go in separate lines. Not knowing the significance of the selection, Fanny decided to follow her mother until an SS guard beat her and forced her to go to the other side. Shortly afterwards, Fanny had her blood drawn and became the victim of medical experimentation that left her permanently unable to have further children. Many stronger women perished, but the hope of reuniting with her daughter gave Fanny the willpower to survive. For most of the following year, Fanny worked in the Union munitions plant. When members of the Sonderkommando blew up one of the crematoria with explosives smuggled out of the factory, the women from the factory were forced to stand for twenty-four hours to witness the hanging of five members of the underground. They then were warned that if they attempted other acts of resistance, they would all be killed. As a result of her work at the munitions factory, Fanny's nails fell out and her face developed rashes. In January 1945, two weeks before the Soviet Army liberated Auschwitz, the Germans evacuated Auschwitz and Fanny was sent on a death march out of the camp. She was forced to walk for three months, eating only the snow on the ground, until she was liberated by the Soviet Army on the Elbe in late April 1945. The Russian soldiers took her to a makeshift hospital where they served her milk. Because they did not have solid food to give her, she was spared the fate of other survivors who died from the inability to digest normal food rations. One week later, the Red Cross visited the hospital and arranged for survivors to repatriate to their home countries if they so chose. Fanny returned to Belgium and found her older sister, Terese, who had survived with her husband hiding in a church and making false papers for the underground. Terese had already picked up Josiane from the convent along with her three sons who had also been placed in hiding elsewhere. One year later Fanny reunited with her husband. Fanny's other sister Rose Bender also survived having hidden as a nun in a convent. In 1949 Fanny, Jacques and Josiane immigrated to the United States.