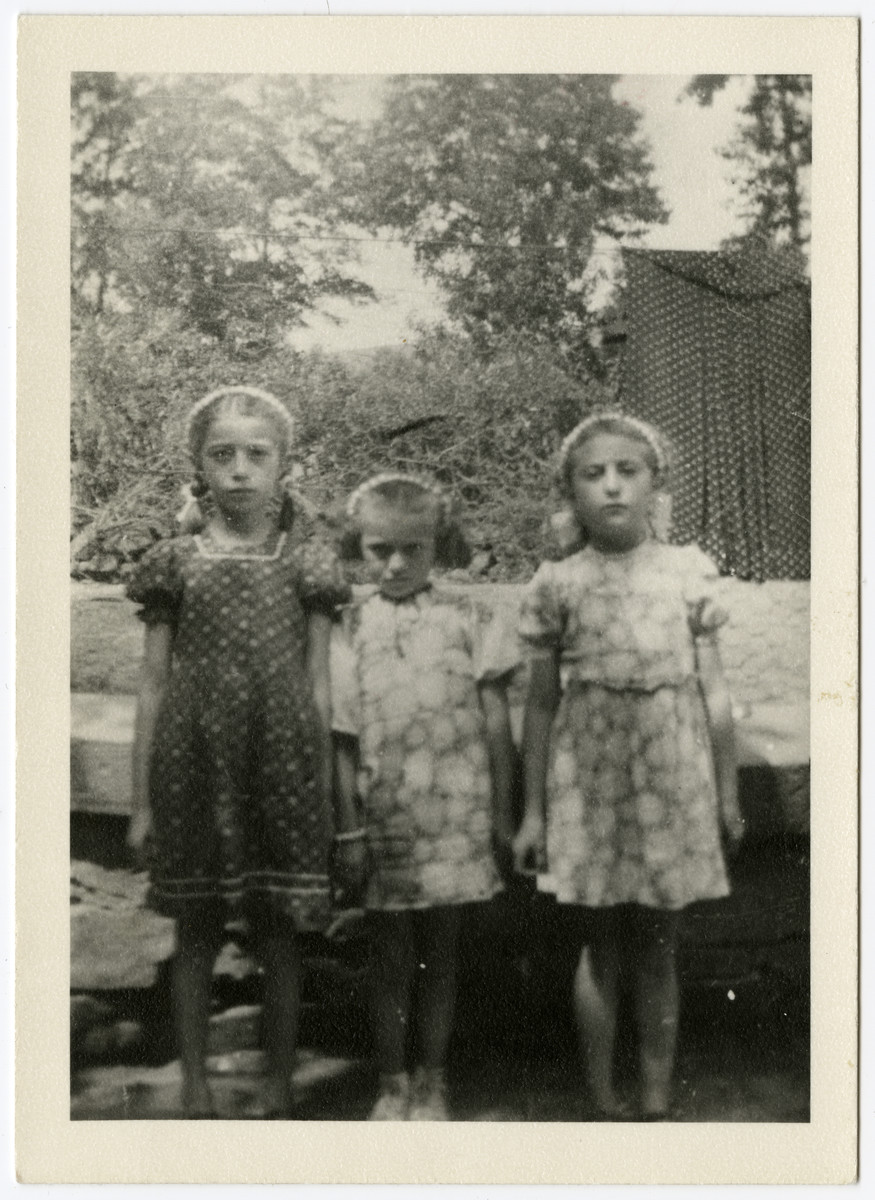 Pictured from left to right are Gyongyi Mermelstein (cousin of the donor), Edit Fogel, and Iren Fogel. Only Iren survived.

Biography
Irene Weiss Fogel (born Irene Fogel) is the daughter of Meyer (b. 1896, Batyu) and Leah (nee Mermelstein, b. 1899, Szuszko) Fogel. She was born on November 21, 1930 in Bótrágy, Czechoslovakia (later Botrad, Ukraine) in Transcarpathia, where her father owned a lumber yard in the neighboring town of Batyu. Irene had two older siblings Serena (later Neumann, b. 1927) and Moise (b. 1928) and three younger siblings Edith (b. 1932), Reuven (b. 1935) and Gershon (b. 1936). The family was strictly Orthodox. In 1939, Nazi Germany occupied Czechoslovakia and gave the section where Irene and her family lived to Hungary. As an ally of Germany, Hungary implemented the Nuremberg Laws. Jews were no longer allowed to attend school and their businesses were confiscated. Thousands of Jewish men including Irene's father, were forced into Hungarian slave labor brigades. Following his return, life became increasingly restrictive and harsh, culminating in April 1944 when hundreds of thousands of Hungarian Jews, including the Fogels, were rounded up and sent to live in the Munkács ghetto, a brick factory with no living facilities.

Over a two month period beginning in May 1944, nearly 440,000 Jews were deported from Hungary to Auschwitz-Birkenau, including Irene and her family. Irene was 13 years old. Upon arrival at Auschwitz, Irene, her sister Serena, and her father were selected for slave labor. Her mother, three younger siblings, and older brother were killed upon arrival. Her father was selected to work as a Sonderkommando and was shot a few weeks later. Irene, her sister, and two aunts, Rose and Piri Mermelstein, worked in the "Canada" section of Birkenau for 8 months until January 1945 when they were forced on a "death march" to Ravensbrück concentration camp in Germany. After 3 weeks they were transported to Neustadt-Glewe concentration camp, in western Germany. Piri Mermelstein became ill and was killed there. Irene and her sister were also selected to be killed but the Russian front was approaching, the Nazis fled, and the gates of the camp were abandoned. Irene, her sister, aunt, and others walked out of the camp and made their way to Prague to find survivors.

In Prague they found an uncle, Joseph Mermelstein, who in 1938 fled from their hometown to Palestine and returned with the Czech Legion of the British Army to fight against the Germans. The surviving family consisted of a few aunts and uncles. Irene and Serena were the only children from the family to survive. They all lived together in Teplice-Šanov in Sudetenland for 2 years until Irene, Serena, and her aunt Rose Mermelstein immigrated to New York in 1947.

Irene married Martin Weiss in 1949 and moved to northern Virginia in 1953. Irene has a BA in Education from American University and taught in the Fairfax County Public Schools for 13 years. They have three children and four grandchildren. Irene is a volunteer at the USHMM.