Anda Duchanova poses with her dog on a wicker chair. 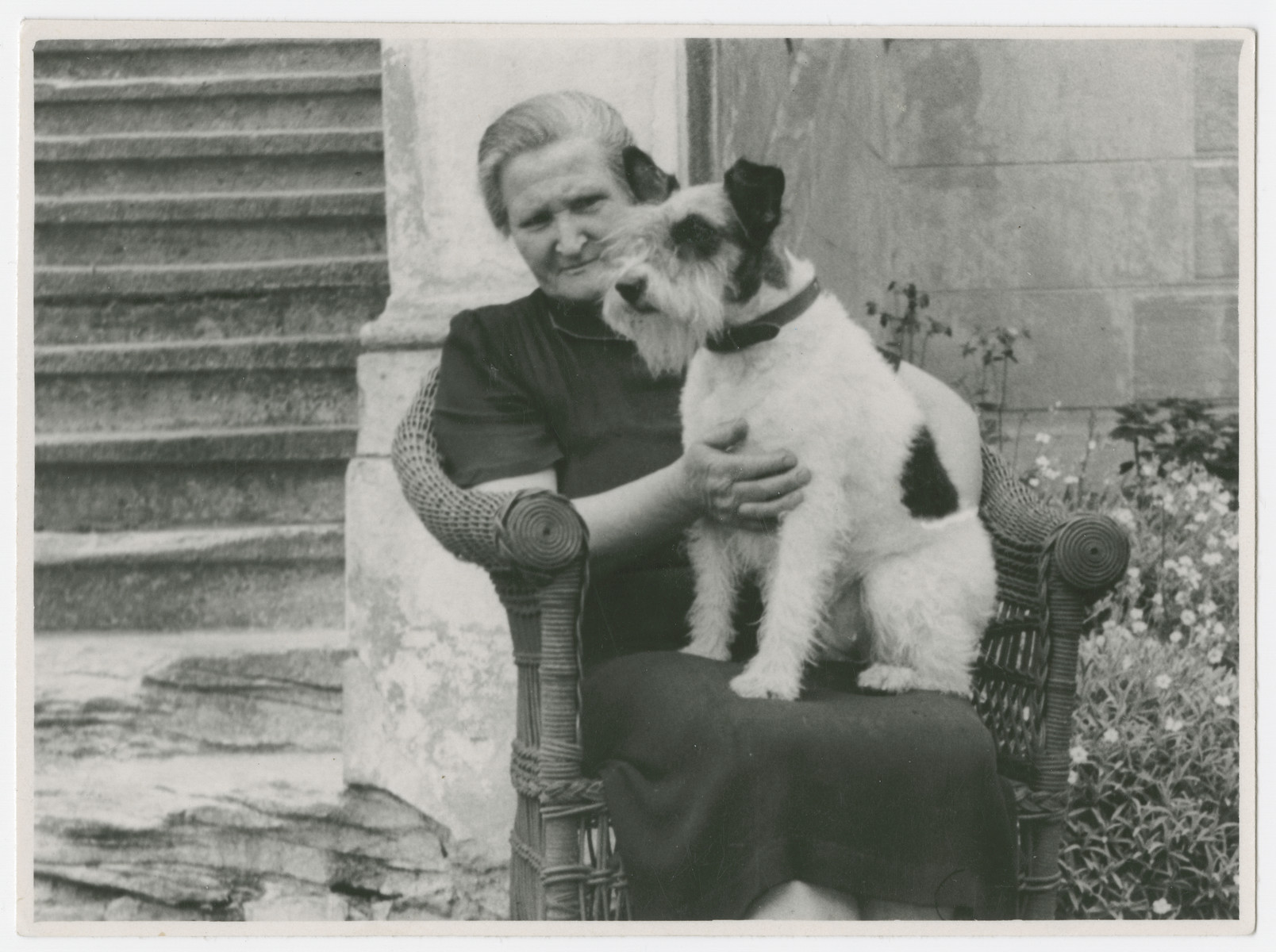 Anda Duchanova poses with her dog on a wicker chair.

Anda Duchanova lived with the Grunwald family in Prague before the war. She saved their belongings and photographs and restored them after the war. Later, Kurt Grunwald and his one survivng brother-in-law, Frank Eisenstein,both agreed to give her the Einsenstein villa in Klanovice where she lived till her death.

Biography
Frank Grunwald (born Misa Frantisek Grunwald) is the son of Dr. Kurt Grunwald and Vilma Eisenstein Grunwald (b. 11/23/1904). He was born on September 30, 1932 in Olomouc, Czechoslovakia and his older brother John was born April 5, 1928. Kurt and Vilma met in Prague when Kurt was a medical student, studying obstetrics. When Misa was two years old, the family moved to Prague so that Kurt could have a bigger practice. Misa’s parents were serious amateur musicians, and his father also developed and printed his own photographs. Misa developed an early interest in art. The family did not practice Judaism and identified both ethnically and culturally as Czech. The family’s life changed radically on March 15, 1939 when German troops invaded and occupied the Czech provinces of Bohemia and Moravia and began instituting antisemitic ordinances. Misa and John were expelled from school; the family had to wear Jewish stars and was evicted from their apartment. Despite their hardships, Kurt and Vilma tried to shield them from the worst. However, on July 13, 1942 the family was deported to Theresienstadt and separated into male, female and children's living quarters. Kurt continued to work as a physician, and Vilma worked in a large camp kitchen. Though food was scarce, Misa received some informal education, spent his spare time drawing and managed to visit his parents in the afternoons. The family remained in Theresienstadt for a year and a half until they were deported to Auschwitz on December 15, 1943. After spending two days in a crowded railcar, they arrived in the camp in the middle of the night. Everyone on the transport was taken by bus to a separate fenced-in section of Auschwitz known as the Czech Family Camp. Again, women and men were assigned to separate barracks, and Misa and John lived with their father. Once when Misa went to visit his mother, he discovered an attractive young woman painting. Because of his interest in art, he stopped to watch her. As a result, a friendship developed between the child and Dina Gottliebova (later Babbit). Dina had arrived on an earlier transport from Theresienstadt, and when the Nazi physician Josef Mengele discovered her artistic talents, he enlisted her to paint portraits of Gypsy prisoners prior to their extermination. Dina later introduced Misa to her boyfriend Willy Brachmann, a Jewish barracks head. Brachman hired Misa as his personal assistant to run various errands. In return Misa received some extra food and clothing to share with his family. By summer, the Nazis decided that they no longer needed the Czech camp for propaganda purposes, and on July 6, 1944 they conducted a selection from the December Terezin transport. Misa’s father was sent to the right with other able bodied men and taken to the F Lager. Misa was directed to the left with other young children, as was his brother who though older, walked with a limp. In a matter of seconds, Willy Brachman grabbed Misa by the shoulder and pushed him into the group of older children thereby saving his life. Misa never saw Willy again. Misa walked out of the area together with the older children and taken to the D Lager where they were tasked with sorting the clothing of new arrivals. Misa once managed to visit his father but discovered he had become depressed and emotionally devastated. Though they didn’t ask each other anything, Misa sensed he had received bad news. Some time afterwards, Misa saw a group of women from Czechoslovakia and asked about his mother. Their refusal to answer, confirmed his feeling that she might not have survived. In October, Kurt was transferred to Sachsenhausen. Misa saw him march out of the camp and managed to toss a winter coat and one boot over the barbed wire fence to him. He tried to throw the matching boot, but it became caught on the fence. Misa remained in Auschwitz until his evacuation on a death march on January 18, 1945. Two weeks later, the Soviet army liberated Auschwitz. Misa marched through the snow to Gleiwitz. Though he could barely walk the sight of prisoners who had been shot motivated him to keep on going. At Gleiwitz the prisoners were loaded onto open coal cars and transported through northern Czechoslovakia to Austria. They arrived starving and enfeebled in the Mauthausen concentration camp. Misa spent the remaining months of the war in Mauthausen and several of its sub-camps. In May 1945, a group of American soldiers liberated him in Gunskirchen and brought him to the town of Hoersching to recuperate. Some of Misa’s friends became impatient and hopped a train back to Czechoslovakia. Meanwhile, Kurt returned to Prague having spent the last half year of the war in different concentration camps. When he learned that there were young Czech survivors in Prague, he went to them to ask if they knew what had happened to Misa. They told him that they had been together, and he was still recuperating in Hoershing. Kurt immediately drove by car to Hoersching and reunited with his son. Together, they returned to Prague. Misa began junior high, and his father remarried. After the Communist take-over of Czechoslovakia, the family decided to flee to the west. Using a false passport with an Italian visa, they escaped by train to Austria and from there went to England. In 1951, they immigrated to the United States where Kurt resumed his medical practice. Misa finished high school and then studied industrial design at Pratt Institute. After Kurt’s death, Misa found a note from his mother among his belongings explaining the circumstances of her death. She wrote it on July 11, 1944 following the selection and moments before she was gassed. In the letter which she sent to her husband in F Lager, she explained how she voluntarily decided to accompany John to the gas chambers. In July 2012 Frank (Misa) donated the letter to the United States Memorial Museum.