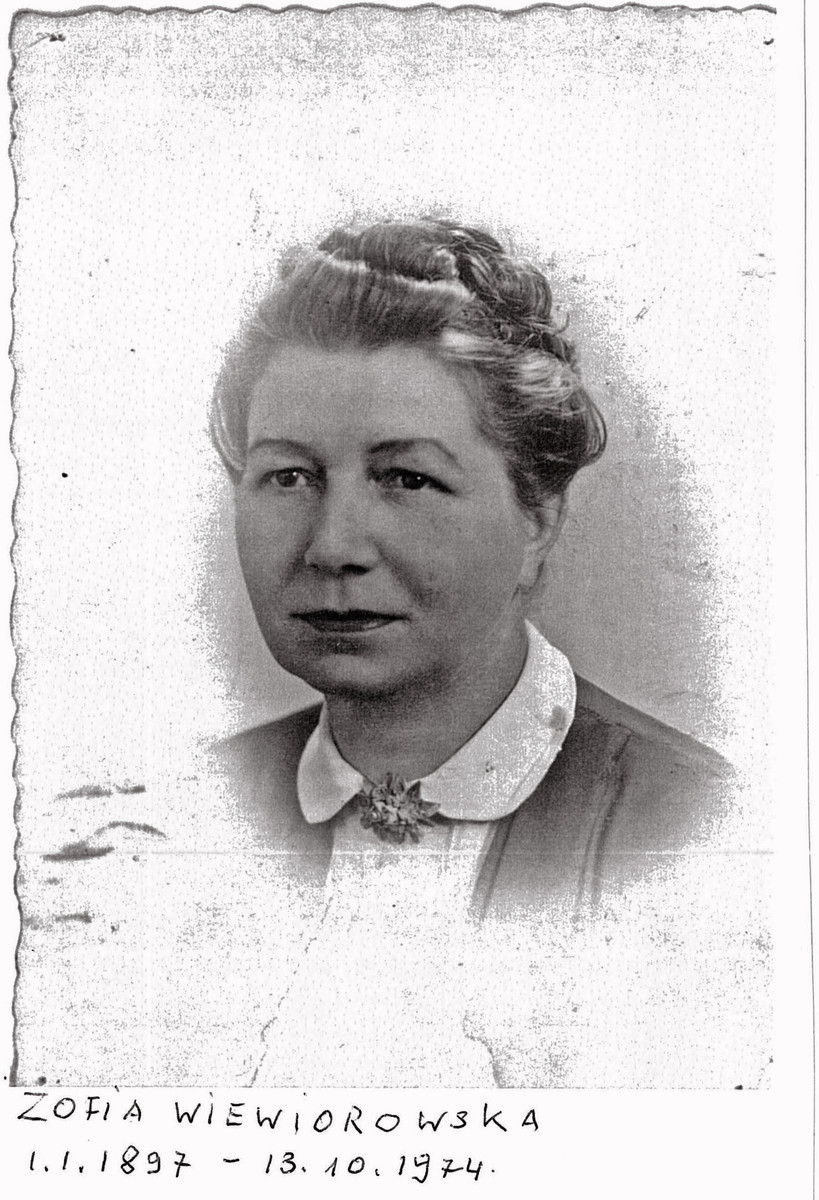 Zofia played an essential role in the rescue of Kazimierz Laski, his wife, and his mother-in-law, Anna Wolfowicz. She was posthumously awarded the status of "Righteous Among Nations" by Yad Vashem.

Biography
Kazimierz Laski (born Hendel Cygler) was born on December 15, 1921 in Czestochowa, Poland, to parents Szmul Cygler and Sura Rywa Cygler (born Deres). Between 1938 and 1939, he attended the first grade of the Panstwowe Liceum (high school). In the fall of 1940, before the establishment of the ghetto in Czestochowa, he moved to Zelechow, near Garwolin, to join his girlfriend (and future wife) Irena Wolfowicz. His older brother, Majer Godel Cygler, left Czestochowa for the eastern part of Poland, then occupied by the Red Army. Majer remained in Krzemieniec, but perished after the German invasion of the Soviet Union in June 1941.

Irena Wolfowicz was born on July 6, 1920 in Czestochowa, to Lewek Wolfowicz and Anna Tendler Wolfowicz. She, her mother Anna, and her brother Janusz had moved to Zelechow shortly before the war to stay with Anna's brother, Dr. Maximilian Tendler. Dr. Tendler moved to the eastern part of Poland and was deported to Siberia. He joined the Anders Army in the Soviet Union, later settling in Palestine and taking part in the Independence War. Irena, Anna, Janusz, and Hendel stayed in the Zelechow ghetto until it was liquidated in September 1942.

All four managed to avoid deportation to the death camp of Treblinka. Shortly before the liquidation of the ghetto, Janusz escaped with false Aryan papers. He was caught in a round-up and sent to Germany for forced labor, classified as a Pole, but he survived the war. Dr. Tendler later joined the Anders Army in the Soviet Union, later settling in Palestine and taking part in the Independence War. Irena and her mother managed to hide in a metal container at the deportation site, and survived in it for several days without food or water. Hendel was sent to a slave labor camp for Jews in Wilga, on the Wisla River. After a short time, he escaped from this camp, and made his way back to the small ghetto at Czestochowa. There, he hoped to reunite with his parents, but he found that they had already been deported during the first Aktion on Yom Kippur 1942, and were killed in Treblinka.

Irena and her mother fled from Zelechow, and managed to survive independently for several months in Warsaw. Irena then decided to locate Hendel in Czestochowa, and to bring him to Warsaw with her. While in Czestochowa, she visited a Polish, non-Jewish friend from high school, Alina Sebyla. Alina's mother provided Irena with the address of her sister, Zofia Wiewiorowska, who lived in Warsaw, had been a classmate of Anna's, and who she believed could provide them with assistance. Hendel and Irena acquired false papers, and with these papers were able to make their way to Warsaw. As soon as they arrived with Zofia's address, Anna contacted Zofia.

Zofia Wiewiorowska, together with Halina Szarowaro, managed a night hospice ("Dom Noclegowy") for women from the lowest strata of society, which was located near the main gate of the Warsaw ghetto. Two rooms in the hospice served as a small hotel, and another as a small infirmary. There, Zofia hid a number of Jewish women throughout the war. In addition, she served as a liaison and courier for Jews hiding in nearby Radosc, delivering money for their upkeep. Zofia placed Anna in one of the rooms in her hotel. Although Anna had false papers under the name of Anna Sierczynska, she had Semitic looks, and was unable to safely leave her hiding place. She remained in the hotel until the Warsaw ghetto uprising, in August 1944. After the fall of the Wola district, where the hospital was located, she managed to blend in with the crowds of Poles expelled from Warsaw. She was sent to forced labor in Germany, where she survived until the end of the war.

Zofia also arranged for false Catholic birth certificates for Hendel and Irena. With these, they applied for Kennkartes (official identification cards) under the names of Kazimierz Laski and Teodozja Lewandowska. With the help of a Catholic nun, Sister Bernarda, Zofia then arranged a job for Hendel, working in a vegetable garden in the suburbs of Warsaw. This job, his false papers, his appearance, and his command of the Polish language enabled him to survive there until August 1944. He fought in the Warsaw Uprising of 1944, as a member of the AL (People's Army) in the Old City district. He was wounded and hospitalized at Plocka Street, and later evacuated to the field hospital in Ursus, in the vicinity of Warsaw. He was liberated there in January 1945 by the Red Army.

Like Hendel, Irena spoke Polish perfectly, but her looks betrayed her Jewish origins and she was forced to change her place of employment frequently. Zofia always assisted in finding a new job for her. Finally, Sister Bernarda found a job for Irena in the Szarytki convent orphanage at ul. Ordynacka, where she worked first in the kitchen, and later as a children's caretaker in the orphanage. Irena stayed there until the Warsaw ghetto uprising. She also was able to leave with the Polish population expelled by the Germans. She found Hendel in Ursus shortly before liberation.