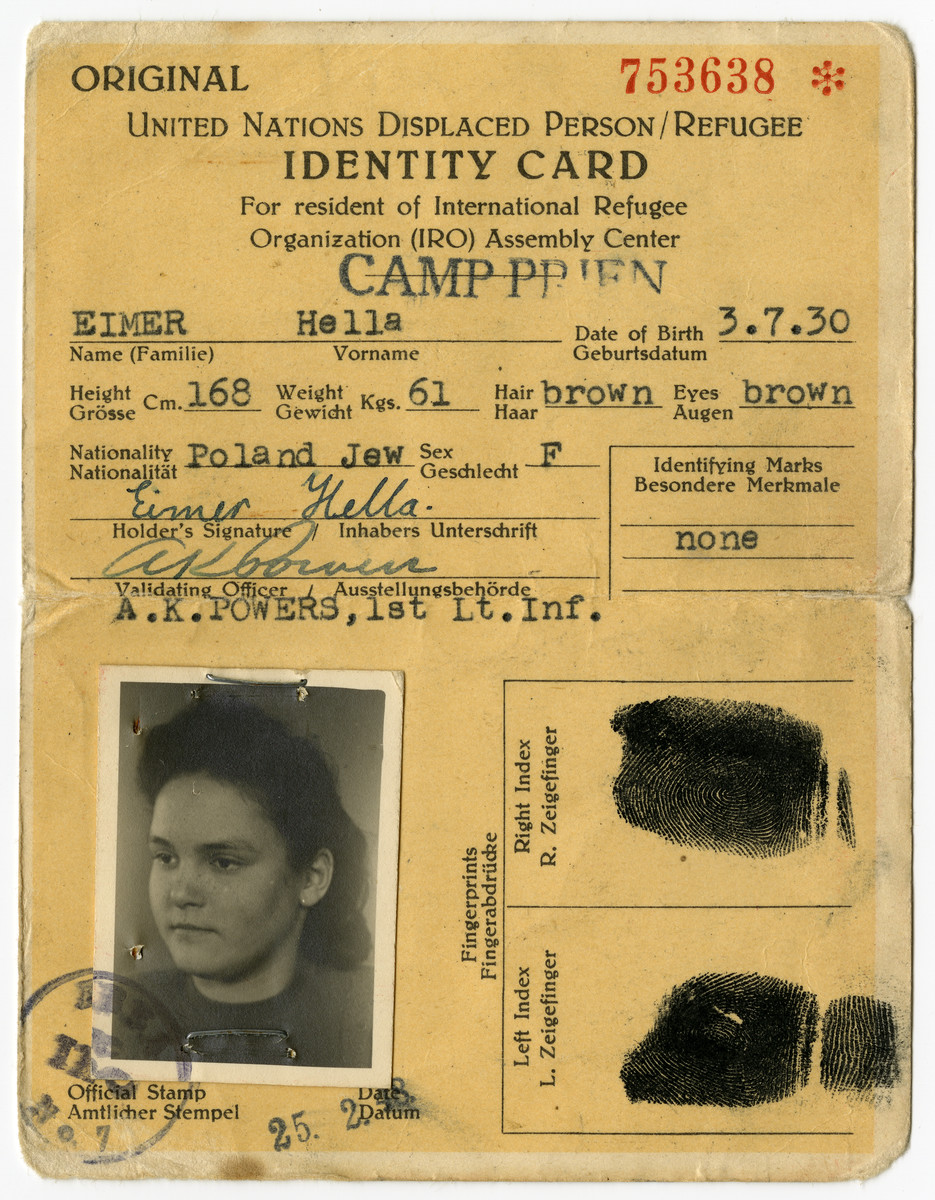 Biography
Helen Berkowitz (born Hella Eimer, the mother of the donor), was born in July 3, 1930 in Dusseldorf. Hela was the daughter of Mendel Eimer and Chaya Frieda (nee Narzisenfeld, 1893) Eimer, both of Polish descent. Helen had three older half-siblings from her father's previous marriage to Ita Sima Fether: Louis, Clara, and Bella (Berta). The family escaped deportation to Poland in the summer 1938 with most Jews of Polish descent. However during Kristallnacht, November 9-10, Nazis entered their home, forced Mendel to sign a suicide note, then threw him off the balcony, breaking both his legs and hips. While he was recuperating, he and Chaya sent Hela to live in Holland until things settled down. Bella was able to immigrate to England.

Soon after the family reunited, they were deported to Poland. After the start of World War II, they fled to the Soviet sector. One Friday night, Russian police came to their home and told them they were going to be deported. Hela's mother rolled up the table cloth with the Sabbath kiddush cup and candlesticks brought it with them. The family was sent to Siberia where Mendel had to work chopping wood. From there they were sent to Uzbekistan. In 1942 Mendel died from exposure to cold and malnutrition. After the end of the war, Chaya brought Hela back with her to Poland. They then went to Germany while hoping to get to the United States. By then Hela was suffering from tuberculosis and went to the Priem children's home to recuperate. After receiving immigration papers, Chaya left for the United States. Hela joined her mother one year later after her recuperation.

Hela later married Herman (Herschel) Berkowitz. Herman was the son of Eliyahu (b. 1878) and Fradel Berkowitz (b. 1896). Herschel was born in 1926 in Craciunesti Romania where his father was a trucker. In 1940 Herschel occupied the town, and then in March 1944 Germany invaded. In May the SS deported the town's Jewish community, including the Berkowitz family, to Auschwitz. Herschel was then transferred to the Bisingen, Buchenwald, Magdeburg and Allach concentration camps. Herman's parents and younger siblings Mindya (b. 1931) and Chana Sura (b. 1933) were murdered in Auschwitz. His sisters Leah and Toby and a brother Meir also survived.