Charles Rojer poses with Dov Stein, a member of the Jewish Brigade who befriended him after the war. 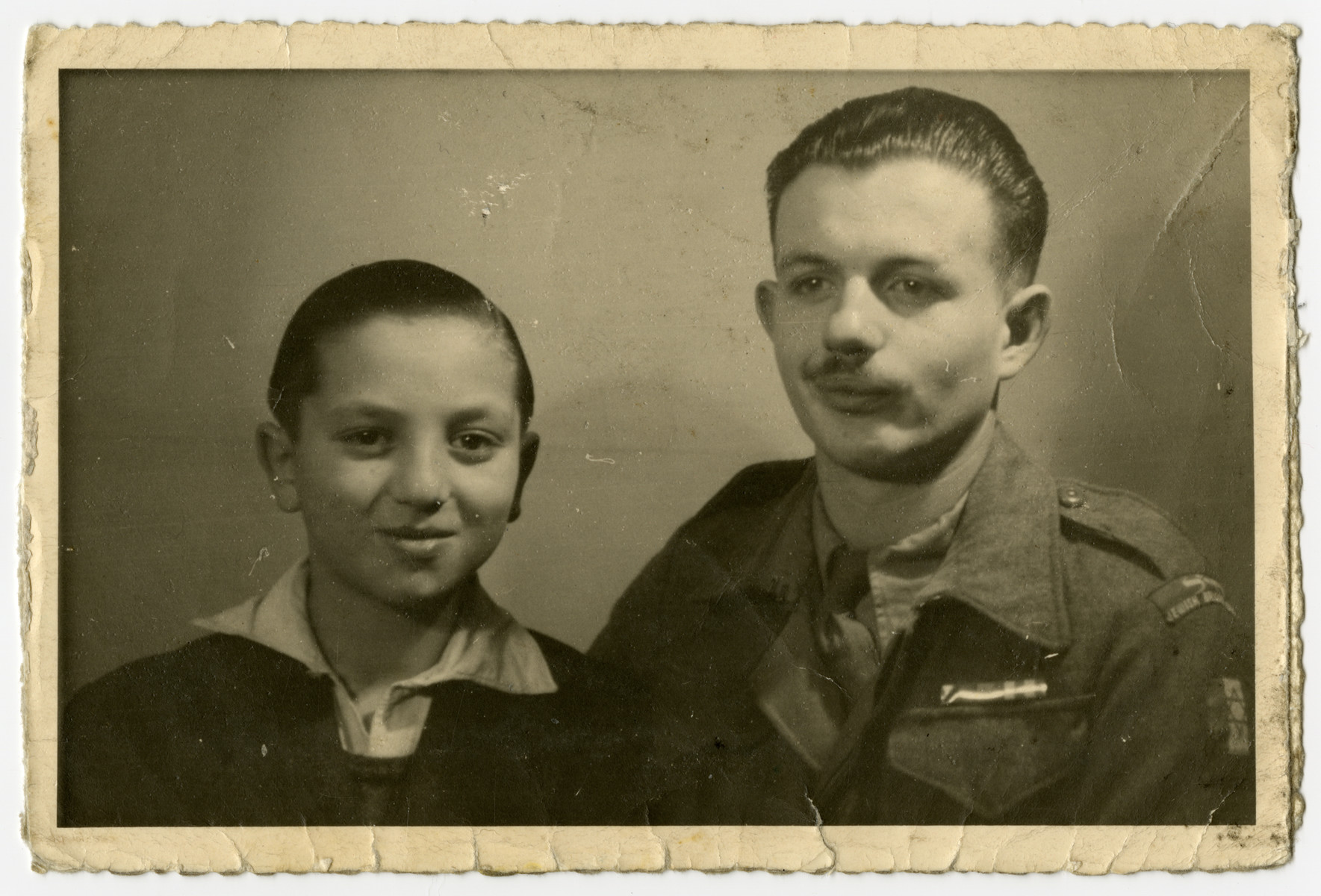 Charles Rojer poses with Dov Stein, a member of the Jewish Brigade who befriended him after the war.

Dov Stein was later killed during an Arab raid.

Biography
Charles Rojer is the son of Abram Rojer (b. 4/6/1902, Warsaw) Gehewa Mednicki Rojer (b. 2/7/1906, Odessa). Charles was born in Brussels, December 6, 1934 and had two older sisters, Anny (b. December 25, 1929) and Cecile (b. October 4, 1931.) The family lived in Brussels, Belgium where Abram worked as a leather goods manufacturer. They had a strong Jewish affiliation but lived in a primarily non-Jewish neighborhood, because Gehewa wanted her children exposed to a more diverse culture. The children attended public school. On May 10, 1940, Germany invaded Belgium, in spite of its neutrality. The following day, Abram packed up his family and they boarded a train to France. Abram was from Poland and hoped to join the Polish Reserve Army. However, the train was stopped by German paratroopers just inside the French border, where they shot anyone who tried to run away to the nearby woods. They herded all the rest of the passengers to the small nearby town of Fortel, on the French side of the border. The family stayed there for about 2 - 3 weeks, surviving German bombardment and strafing of the civilians in the main square, while searching for food, before returning to Brussels. At first, their life did not undergo many changes, but by 1942 they had to wear Jewish stars, and the children were expelled from school. Abram and Gehewa decided to place their children in hiding and determined that seven-year-old Charles was most at risk. He was sent to a tuberculosis sanatorium in Brussels. The director of the sanatorium was known as someone who supported hiding Jewish children. Charles went to live there with only a small suitcase of clothes. His parents, because of the German decree against Jews using public transportation, visited him once, in December 1942 for his birthday, and promised him that when the war was over they would come back to get him. That was the last time he saw them. Abram and Gehewa were rounded up, sent to Malines, and then deported on January 15, 1943 on Convoy #18 to Auschwitz where they perished, as did his grandfather, Leon Mednicki, grandmother, Sabine, aunt, Rosa Mednicki Warman and her two children, Lilly and Israel Warman.

That day, the Germans searched the sanatorium. The director hid the few Jewish children in a closet until they left, but decided afterwards it was no longer safe for them to stay there. Charles was moved by the Belgian underground to a children's home in a small village outside of Brussels, where Andree and Suzanne Romain, two Catholic siblings recruited by the head of their Social Service Department at their University, were in charge of about a dozen other Jewish children, but had to move several more times. Eventually, Charles, and the others, came to settle in Villa Irene, a large home in Francorchamps, Belgium. He remained there until the end of the war. The two sisters brought the children to church each Sunday and pretended to run an orphanage, even though all the kids were Jewish. While in hiding, the children spent a lot of their free time searching for food. They would go to different farms and beg, telling people they were hungry orphans. They also would raid orchards and steal produce from the farms, if the farmers refused their request for food .

In 1944, when Charles was 10 years old, the American Army came through and one of the troop units was stationed at their villa. The Americans gave them food and provided protection from the Germans. After a few months, the war ended, and some parents came to the orphanage to retrieve their children. Soon Charles was one of only a few children remaining. The Romain sisters transported them back to Brussels, to be assigned to a new, larger Jewish orphanage. One day, in 1946, while back in Brussels, he was visiting children hidden with him in Francorchamps, a woman came to their house and told Charles he looked like a girl who was in another house a few blocks away. She thought she might be his sister, so they went to check. Sure enough, it was his sister Cecile, and the two were reunited. Their other sister Anny was living in another home nearby. The sisters had been in hidden together in a Catholic convent during the war. In addition a group of aunts, uncles, and cousins had survived. None of them knew that Charles was alive, so later that evening, the siblings brought him to their aunt's house for a reunion. In 1947, Charles' uncle, Bernard Mednicki, moved to the United States with his wife and three children. A year and a half after his arrival, he arranged for Charles, Anny, and Cecile to immigrate. They came over in June of 1948 on the S.S. Marine Jumper. Charles joined his uncle in Philadelphia, while the two girls soon found jobs in New York.

Charles first attended the McCall School, to learn English, and after a few months moved to regular public school. He went on to college and medical school becoming an ear, nose, and throat specialist. He practiced his specialty in Philadelphia, for forty years and retired to Princeton, NJ. His three children and nine grandchildren are his personal victory over Hitler.