Marion Kunstenaar sits in front of her grandparent's house. 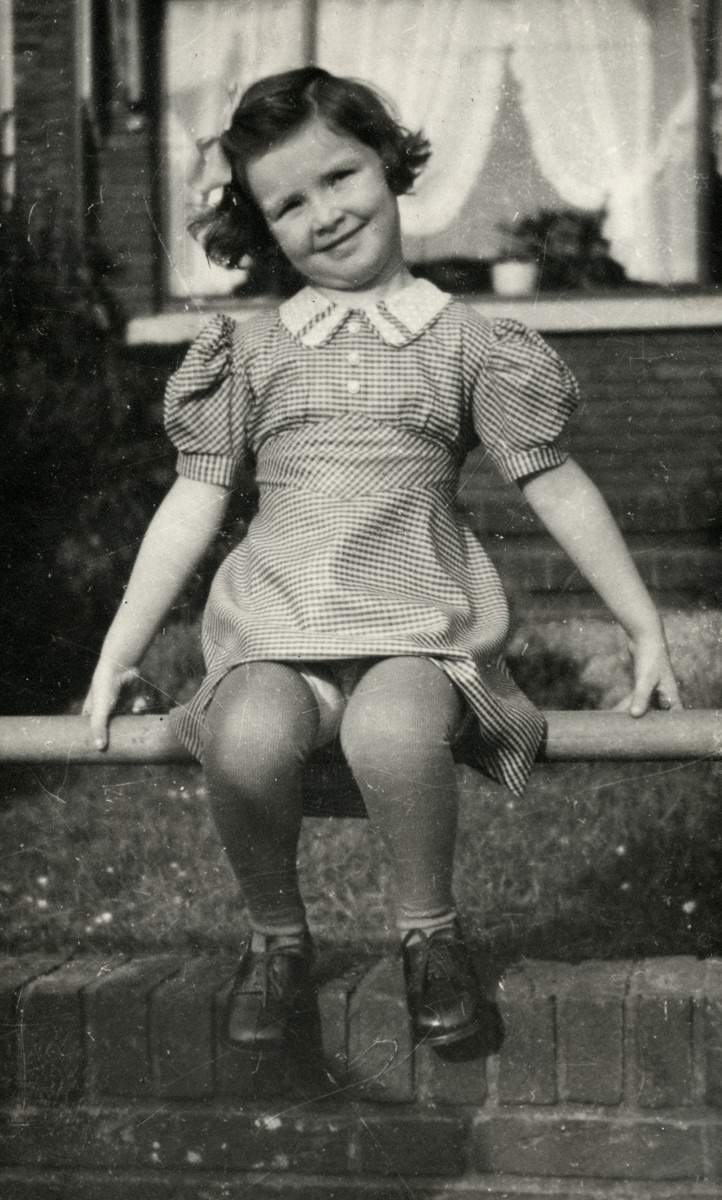 Marion Kunstenaar sits in front of her grandparent's house.

Biography
Marion Kunstenaar is the daughter of Michel Kunstenaar (b. February 2, 1909 in Scheveningen) and Tiny Van Ommen (b. March 30, 1908. Marion was born on March 23, 1937 in The Hague where her father imported, sold and restored antique Persian carpets. Marion's mother studied singing. She was not Jewish and after courting her for seven years Michel's mother, an Orthodox Jew reluctantly agreed to their marriage. Marion's father Michel, although raised in Jewish tradition, was totally assimilated.
In spite of the German occupation of Holland in May 1940 the family was able to remain in their apartment in Scheveningen until the beginning of 1943 when the entire population of Scheveningen had to move inland. They relocated to Amsterdam where they moved into a cousin's house. Finding a place to live was extremely difficult at that time. Her paternal grandparents and one of her father's brothers with his wife and children also relocated to Amsterdam. In the summer of 1943 Marion's grandparents were told to report to the Hollandse Schouwburg, a well-known Jewish theater where the Jews were assembled for transportation to the Westerbork transit camp. Marion's mother Tiny had a connection to one of the guards, Mr. van der Kar and hoped he could help. She obtained a letter from a doctor saying that they were not well enough to travel and somehow their names were taken off the list, and they were given permission to leave. However, Marion's grandfather refused, saying he would stay with his fellow Jews His wife, Mietje/Marie didn't agree with him and they started arguing.
Mr. van der Kar at that crucial moment told Tiny that if she didn't leave immediately, she would be caught as well. She left, devastated, and returned home. Not long afterwards Marion's aunt and uncle, Josephine and Simon Kunstenaar, together with their children Mary and Jacky were deported as well. Marion's mother Tiny tried to persuade Josephine to leave the children in the Jewish school and that she would look after them and find them a safe place, but to no avail. They were all killed in Sobibor. Marion's uncle Jonny (Leon) stayed in The Hague and went into hiding there. He finally was betrayed and deported to Auschwitz, where he was gassed.
Shortly after Marion's grandparents were deported Michel decided they should go into hiding. Since his wife was not officially Jewish they found a place to stay with her family. They first stayed a few days in Voorburg in a large laundry until they were able to reach their destination. There were many Jewish people hiding including children with whom Marion played. From there they went to the house of her maternal grandparents in The Hague. Her mother's sister and cousins also stayed there which made the place very crowded. Her father did not get along with his father-in-law, but they had no choice but to remain there until Tiny's brother and his family left for Friesland. Then they moved to an apartment and stayed there till the end of the war.
After liberation the family returned to Scheveningen. Her father's non-Jewish partner had remained in the store and took care of it faithfully. In return her father took his son into the business. Marion went to school at the Gymnasium Haganum in The Hague. She finished school in June 1956 and married Max Wolff in December of that same year. She has three children and immigrated to Israel in 1995 together with her new partner Elie Saghroun, who passed away in December 1999.