Bosnian partisans hold a meeting in the woods. 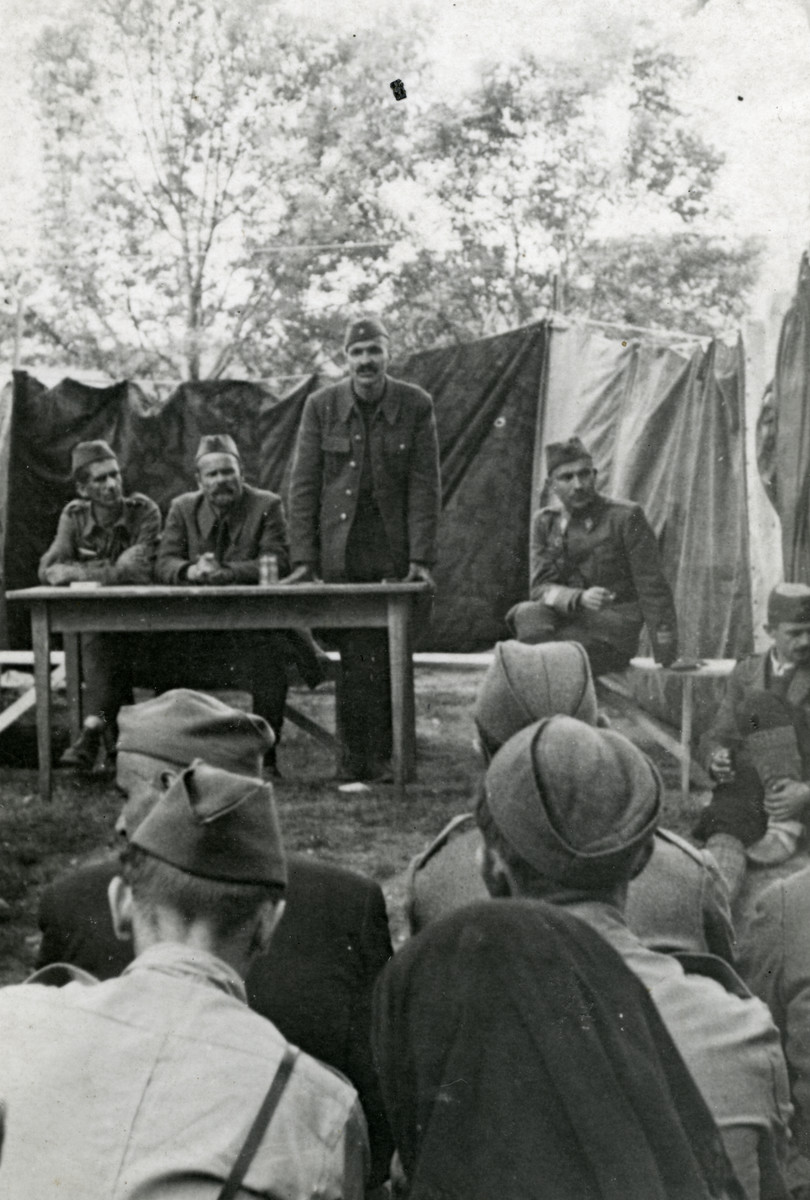 Bosnian partisans hold a meeting in the woods.

Biography
Donna Bakovic (born Donna Mira Papo), the mother of the donor) was the daughter of Salomon Papo and Sarah Levy. Donna was born in December, 1921 in Sarajevo, Yugoslavia. Salomon worked as a janitor at the Treasury of Bosnia. Donna belonged to Hashomer Hatzair and had hoped to immigrate to Palestine, but with the outbreak of the war it was not possible. Her father was taken to a slave labor camp and killed by the Ustasa early in the war. Along with most of her friends from the youth movement, she was recruited to a partisans unit. In 1942, all of the Jewish members of the battalion were told to give back their rifles and leave Sarajevo. Donna went to the forest, but that was very dangerous as German soldiers and Serbian fascists called Czekniks were searching for people hiding in the forest. After a couple of days, she returned to Sarajevo to find her home boarded up. Her mother Sarah had been arrested and was killed in the Jacovo concentration camp.
Not knowing where to go she fell asleep on a park bench. Early in the morning a friend of her father recognized her and offered to help. He told her to wait for him and that he would find a solution. Not long afterwards Dervis Korkut, a well dressed gentleman wearing a Turkish fez, appeared and told her to follow him. He explained that he was the director of the Muslim museum in Sarajevo and that he had a young wife who had just given birth. He offered to hide her exchange for some help. She was told to pretend she was mute and was from another village. As a prominent figure in Sarajevo, Muslim and German officers frequently attended concerts in his home. Donna lived with the Korkuts for a few months until she managed to return to the forest. Donna spent the remainder of the war with the partisans changing her name to Mira, and after the war she continued to serve as an officer in the Yugoslav army. Her son Davor was born in December 1948. Mira lived as a devoted Communist but began to reconnect with Judaism in the 1960s. Davor immigrated to Israel in 1970 and she followed two years later.
After Davor had lived in Israel for quite some time, he learned other aspects of his mother's story. In 1946 Tito's regime arrested Dervis Korkut and charged him with complicity with the Nazis in Sarajevo. This crime carried a potential death penalty. One day, Mira was walking in Sarajevo when Servet Korkut, the wife of Dervis, spotted her and fell to her feet. She told her about the trial and begged her to testify on Dervis' behalf. Mira promised to help, but her husband intervened and told her not to testify lest she herself be targeted. This weighed on her conscience for many years until she read an obituary for him in 1976 and realized he had not been executed. Instead, he had served a prison sentence of some 7-8 years. Mira learned that not only had he saved her but he also had hidden and saved the valuable Sarajevo Haggadah (one of the world's oldest haggadot dating to the 1300s). She decided to tell her story to Yad Vashem who recognized both Dervis and Servet as "Righteous of All Nations."
In 1999 the story came full circle when Davor was asked to greet Bosnian refugees fleeing the atrocities there who had flown to Israel. Among them was the family of Lamija Korkut, Dervis and Servet's daughter. He had met Dervis' son who was living in France to present the award to him but he did not know that there was another younger child alive. Her family had been evicted from their home in Pristina, and when they left, they brought the "Righteous" certificate from Yad Vashem with them. This certificate helped them find a safe haven Israel. The family of Lamija Korkut remained in Israel for four years, before leaving for.

[Source: interview with Davor and from article by Jackie Metzger and Yael Weinstock for the International School of Holocaust Studies at Yad Vashem.]