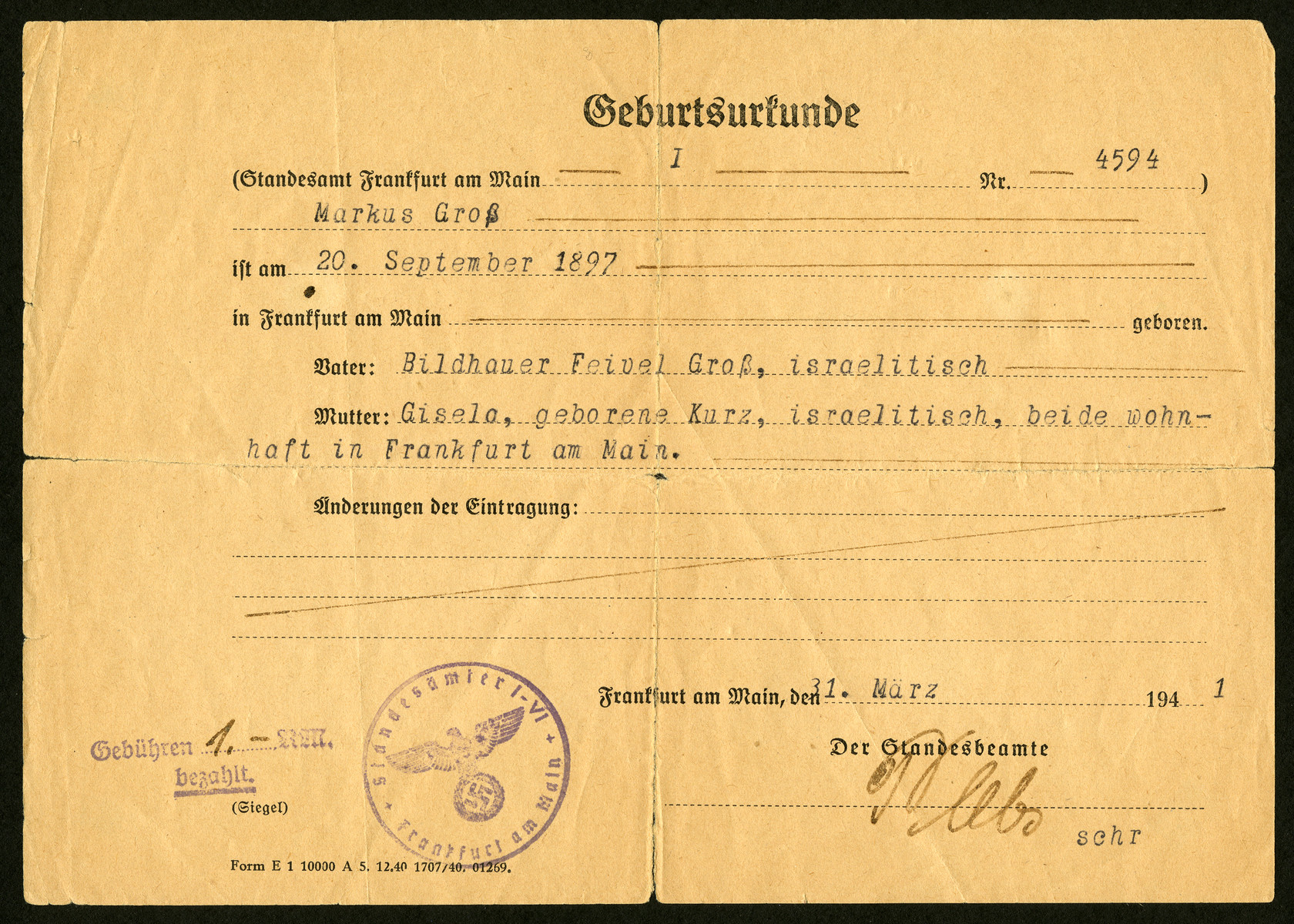 Biography
Fred Gross is the son of Markus (Max) and Nacha (nee Reichert) Gross. He was born October 8, 1936 in Antwerp, Belgium. Nacha was born in Pabienice, Poland and Max was born in Frankfurt-am-Mein. They married in Germany where their oldest son Sam was born in 1923. The following year they immigrated to Belgium where their second son Leo was born in 1928. Max worked as a diamond cutter and the older two boys attended the Tahkemoni School. A few days following the May 10, 1940 German invasion of Belgium, the family fled to a coastal town about three miles from the French border. Among the crowd of refugees, Max ran into a friend, and they decided jointly to buy a car from a farmer; the farmer also let them stay in his barn for two days till the roads cleared. While en route, the families often had to get out of the car to take shelter from German bombs. At one point, the car stalled and Max decided to take the luggage off the roof in order to lighten the load. They placed their belongings in storage and continued on with only the clothes on their backs. The car broke down and the two families eventually parted ways, and the Gross family continued on foot. A truck filled with other refugees drove them to Le Treport, France where they took shelter for the night in a movie theater. In the middle of the night, the Germans bombed the town. After the bombing stopped, the family left the theater and resumed their flight on the same truck. They had to keep dodging machine gun attacks and bombs but eventually arrived in Dieppe, on the English Channel. There, they crammed into a train headed to Paris to stay with Max's sister Hedwig and her family. Once German troops neared Paris, Fred's family continued south to Bordeaux in the hope of crossing into Spain.
They arrived in Bordeaux on May 29th, where the head of the Portuguese Consulate in France sdecided to go against the wishes of the government and passed out visas to as many Jews as he could so that they could cross the border into Spain and head to Portugal. The family was able to obtain these visas to Portugal, but when they reached the border, they found the French army was detaining draft eligible men for what was left of the French army. Nacha was worried that they would nab Sam, so instead they boarded a Red Cross van that brought them to Dax. On June 22, France signed an agreement granting Germany control of over 60% of France. The Gross family walked through the woods towards the unoccupied zone. A Red Cross bus brought them to Pau, a city in the foothills of the Pyrenees Mountains that separated France from Spain. The refugees stayed in the school's auditorium. One day, the French police entered the school and told the refugees that would be transported to villages outside of Pau in order to have real places to sleep. The police ended up bringing them to the Gurs concentration camp. They arrived at Gurs on June 27 or 28 of 1940. As soon as they got there, women and younger children were separated from the men. Fred went with Nacha, while Sam and Leo stayed with their father. A barbed wire fence separated them. Max devised a plan and to help Sam escape to obtain papers so that the family could leave the camp. They went to the neighboring town Orin around July 10, 1940, where Max's cousin, Leo was living and was friends with the mayor. The mayor greeted them and took them to the restaurant he owned for a proper meal. The Gross family stayed with Leo and his family in an abandoned castle. However after a few days the townspeople began blaming Jews for the war and food shortage, so the mayor declared it was no longer safe for them to stay. He made arrangements for them to go Oloron to catch a train to Toulouse. They left with only a few blankets riding through the back roads to avoid the Gestapo and the French police. They then took a train to Toulouse in hopes of being able to cross the border into Spain. Though the family had Portuguese visas, they didn't have the Spanish transit visas needed to enter the country. Therefore after a week they continued on to Marseilles. After three months, they left for Nice which was considered a relatively safe haven since it was under Italian jurisdiction. They got a room in the Hotel Continental and were able to maintain a relatively normal lifestyle. Max started selling jewelry and Leo attended school. Eventually, the government started applying Vichy's anti-Jewish laws in Nice. In the spring of 1942, the police planned to deport young Jewish men to slave labor camps. Max and Nacha decided that Sam needed to sneak out of France. After obtaining the necessary visas, Sam left in April 1942 and remained in Lisbon for the remainder of the war. A few months later rumors circulated about an impending round-up which took place on August 26. Max asked his friend Consalo, a French Catholic of Italian descent, to hide the family. Max and Nacha moved into in his basement, while Leo and Fred shared a spare bedroom living openly as part of the Consalo family. Consalo agreed to care for the boys if anything happened to the parents. However, after two weeks, Consalo asked them to leave his home and move to a different apartment he owned in fear that an informant would alert the police. After moving to the apartment, Nacha was afraid their new neighbors would betray them and therefore obtained false passports for the family.

After Hedwig, Max's sister, told them her family was going to Grenoble and from there to Switzerland, Max decided they would leave for Grenoble the following morning. Once in Grenoble, they hid in a convent and a Catholic sister arranged for a smuggler to take them to Switzerland. The smuggler escorted a group of Jews, including the Gross family, towards Switzerland. About two miles from the border, he told them which way to go and left. When they approached the Swiss border, the border guard told the group only those refugees who had Swiss relatives would be permitted to cross the border. Luckily though, since Nacha's mother Rachel already lived in Zurich, the Gross family was allowed to enter the country. The guards transported them to displaced persons camps. They took Max to Buren, about 50 miles north of Bern, and they brought Nacha, Fred, and Leo to Munchwilen, a camp about 60 miles north of Zurich, where conditions were only slightly better than in Gurs.
In February of 1943, Leo and Fred left the camp to live with foster families. Leo stayed with a Jewish family in Zurich and was able to visit his grandmother Rachel on occasion. That August, Nacha left the camp to stay with her mother, and Max joined her in November. Finally in February of 1944, Fred and Leo left their foster homes to stay with their parents and grandmother. The family stayed in Zurich for the rest of the war. The children attended school and Max found a job as a diamond cutter. After the war ended, Max made plans to go to America. He contacted his New York relatives for help who had already helped Sam come to America in January of 1946. In February 1946, the family flew to Antwerp and in March, they boarded the USS James W. Johnson. They arrived at a naval base in Norfolk, VA and then took a train to New York and reunited with Sam.