Romano Pelligrino with his father Mario. 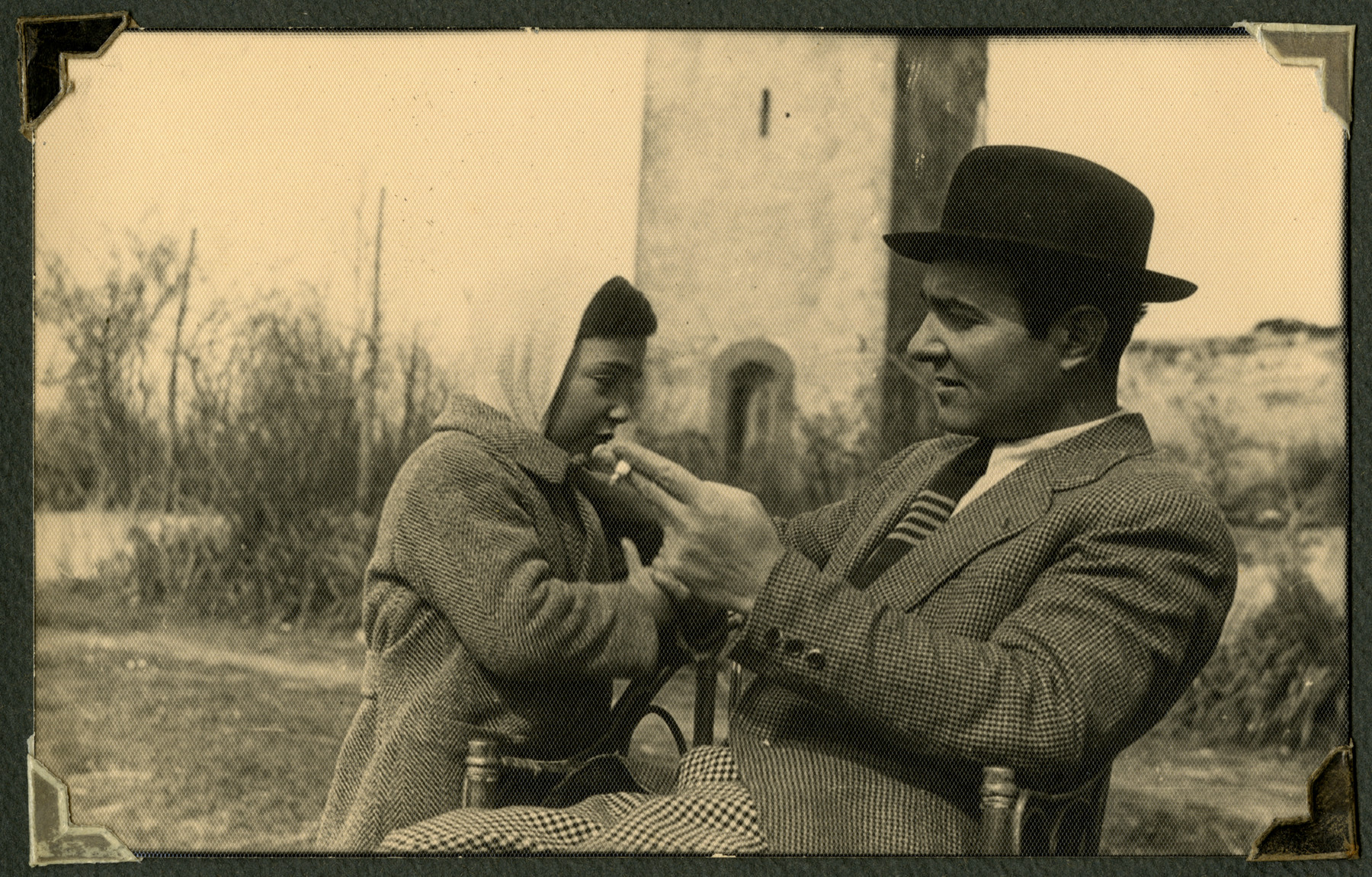 Romano Pelligrino with his father Mario.

Biography
Roy Parker (born Romano Nunzio Voltango Pelligrino) is the son of a German-Jewish woman, Helga Reinsch and an Italian father, Mario Pelligrino. Romano was born on March 9, 1938. His maternal great-grandparents, Abraham Isaak Abraham (known as Isaak) and Olga Freudenthal Abraham, were in the fur business prior to World War I and later began investing in real estate. They had one daughter, Helene Hannie Abraham. Hannie Abraham met and married Karl Reinsch, who trained as an apothecary prior to World War I and fought in the war. Their daughter, Helga, was born in June 1920. The Reinsches owned an apothecary shop in eastern Berlin. In the 1930's, the family began to be affected by the anti-Jewish persecutions. Helga had to leave her public school and attended a private school for Jewish girls. Karl was briefly interned in Ravensbrueck, and the family had to pay a ransom for his release. By the mid-1930s they began to make plans to emigrate.
In 1936 while on a family vacation, Helga met Mario Pelligrino, a non-Jewish Italian naval recruit. She married him, giving birth to Romano in 1938. In the meantime, the Abrahams and Reinsches planned to immigrate to Cuba and from there, to the United States. Their plans were delayed when Isaak Abraham died on November 9, 1938. The Nazis confiscated their extensive real estate, stocks, and personal property, and Olga, Hannie, and Karl immigrated to Cuba in 1939 and came to the United States in 1941. Soon after, Karl died and Hannie supported herself by doing odd jobs and working as a milliner.
Helga, Mario, and Romano remained in Europe throughout the war. In the spring of 1939, Mario purchased tickets for their immigration to Cuba on the MS St. Louis. The family never boarded the ship, as Helga found out that her trousseau was missing and refused to board. Returning to Berlin, Mario, who spoke six languages, took a job attached to the Italian embassy in Berlin, supervising the 100,000 Italian laborers who worked in Germany filling the positions left vacant by departing German soldiers. Helga and Romano became Italian citizens and were able to move about unmolested as long as Helga displayed an Italian flag on the baby carriage. By 1941, Mario became nervous for his family's safety and the workers began to return to Italy. He commandeered train cars to carry their personal possessions to Italy and told Helga he was taking Romano to Italy. Helga, who did not want to leave Germany, refused until the last minute, but finally joined her husband and son. They spent the rest of the war near Mario's family in Via Reggio in Tuscany, and in Monte Catine. Mario was the leader of a partisan group, but also worked with both the German and Allied officers stationed in the area to make sure he could keep his family safe. Helga and Romano had to hide from the Germans frequently, particularly in 1943-1944.
After the war, Mario registered with the Red Cross, which enabled Hannie to locate her daughter, son-in-law, and grandson. In 1945, Hannie was one of the first refugees to return to Europe, spending several months in Italy with her family. In 1947, Helga, and Romano (now Roy) immigrated to the United States from Genoa on the SS Victory Shark, landing in New York. Mario, who was born in Tunisia, was officially on the French quota and joined them several months later. Helga and Mario divorced in 1950; Mario remarried and moved to Venezuela.
Hannie Reinsch began trying to get restitution for the family's confiscated property in the early 1950s. It was a multi-decade battle, with the various properties being returned to the family slowly over the years. The family's former residence at Uhlandstrasse 108/9 was destroyed during the war, and was one of the first properties to be returned to Hannie. She took advantage of a German rebuilding fund to rebuild the property, but had to make it into an apartment building. Over the years, Hannie fought to regain the other properties, selling them to make enough money to live. She returned to Germany several times, permanently in 1974, living in one of the apartments at Uhlandstrasse 108/9. After her death in 1977, Helga finally sold that property. After the Berlin Wall fell in 1988, Helga fought for restitution for two additional properties located in eastern Berlin: the building which housed her father's apothecary shop and a cottage on the lake in Furstenburg. The family successfully regained these properties and sold them in the 1990s. Helga Reinsch Pelligrino died in 2001.