Ilse Oschinsky rides her tricycle in front of their house in Grottkay, Schlesien, Germany. 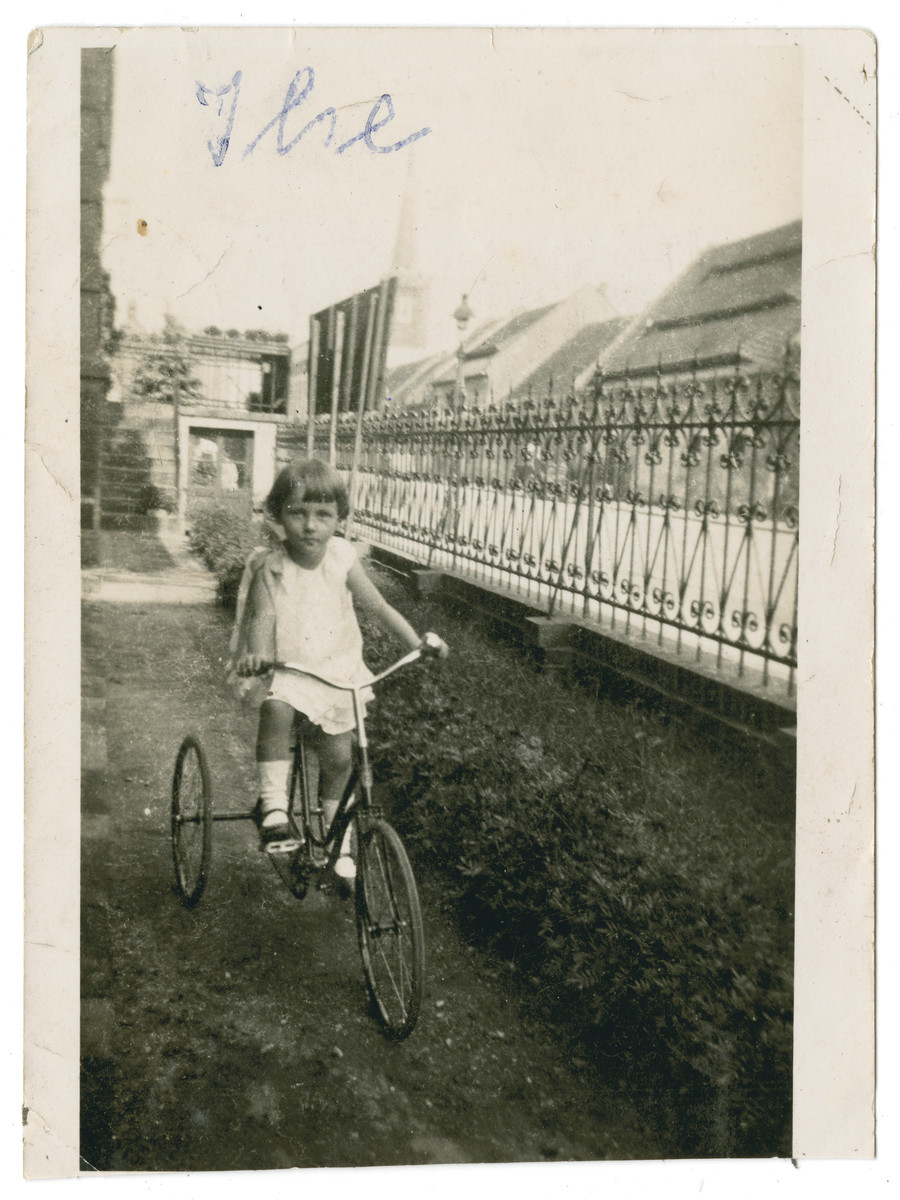 Ilse Oschinsky rides her tricycle in front of their house in Grottkay, Schlesien, Germany.

Biography
llse Sakheim (born Ilse Oschinsky) is the daughter of Kurt Berthold Oschinsky (born Oct. 27, 1897 in Grottkau, Schlesien, Germany) and Sophie Oschinsky, nee Schleyer (born June 22, 1890 in Ohlau, Schlesien, Germany). Kurt and Sophie married Jan. 7, 1924 and lived in Grottkau, where Ilse was born on August 14, 1925. Kurt had worked with his father as a grain merchant and later took over, enlarged the business and ran it together with his wife. He was on the futures stock exchange in Breslau, and even had a direct rail from the train station to it . However, the depression, antisemitism, the Schlange-Schoeningen law permitting farmers not to pay their debts to grain merchants ruined it.

In 1932 the family moved to Leobschuetz, Oberschlesien and opened a large store that sold expensive toilet soaps, gift boxes of such soaps and perfumes, special communion candles as well as decorated fancy birthday candles, cleaning supplies and other personal and household items. At first the business prospered, but a few months later in April 1933 the Nazis declared a boycott of Jewish businesses, and armed SA men prohibited customers from entering the store. The business began to suffer and never really recovered. It had to be given up, and Kurt peddled left-over goods to farmers on his bicycle . The family also had to abandon its apartment and relocate to a poorer neighborhood. Sophie sold what she could directly from there. Kurt then got a job as a travelling salesman for a Jewish firm but was let go, after the firm was Aryanized. He next worked as salesman for a Christian firm until Christians were not permitted to employ Jews. In order to earn a living, he accepted a job laying railroad ties for the government. This was very hard labor, with very little pay and in another small town where her ented a room and only came home on Sundays.
On the night of Kristallnacht, November 9, 1938, Kurt was arrested and sent to the Buchenwald concentration camp where he remained until mid-February 1939. Ilse's mother had applied to the Jewish Committee for Ilse to be accepted for a Kindertransport to Holland. Somehow, she never given a date. After Kurt returned from his terrible experiences in Buchenwald, he travelled to the Committee to make sure Ilse would get out of the country. He found that her papers had been lost. Instead she was registered for a different transport going to England which undoubtedly saved her life. Ilse arrived in Birmingham, England on April 20, 1939 and lived with a Jewish couple, Henry and Rebecca Abrams until she was evacuated to Hawkesbury Upton, Gloucestershire at the beginning of WWII. At first, Ilse stayed in touch with her parents via people in neutral countries. In 1941/42 they wrote they were being deported; Ilse later found they were murdered in Auschwitz. In 1940 Ilse returned to Birmingham and lived in a Jewish Refugee Hostel on 34 Wheeleys Road, Edgbaston, Birmingham with about 30 other refugees. She worked as a junior clerk in the office of a jewelry factory for a time, then learned shorthand typing at night and got a job as secretary for a social work agency. She survived the bombing of Birmingham and celebrated the end of WW II with her friends.

In January 1947 Ilse returned to Germany in hope of locating her parents which unfortunately never happened. There where she worked for the Civil Censorship Division of the American War Department. in Offenbach, Germany. At the end of 1947, Civil Censorship came to an end. Ilse returned to England, lived with an English friend and worked as secretary for the Motor News newspaper until she came to New York in September 1948.