Postwar portrait of the Tenin family. 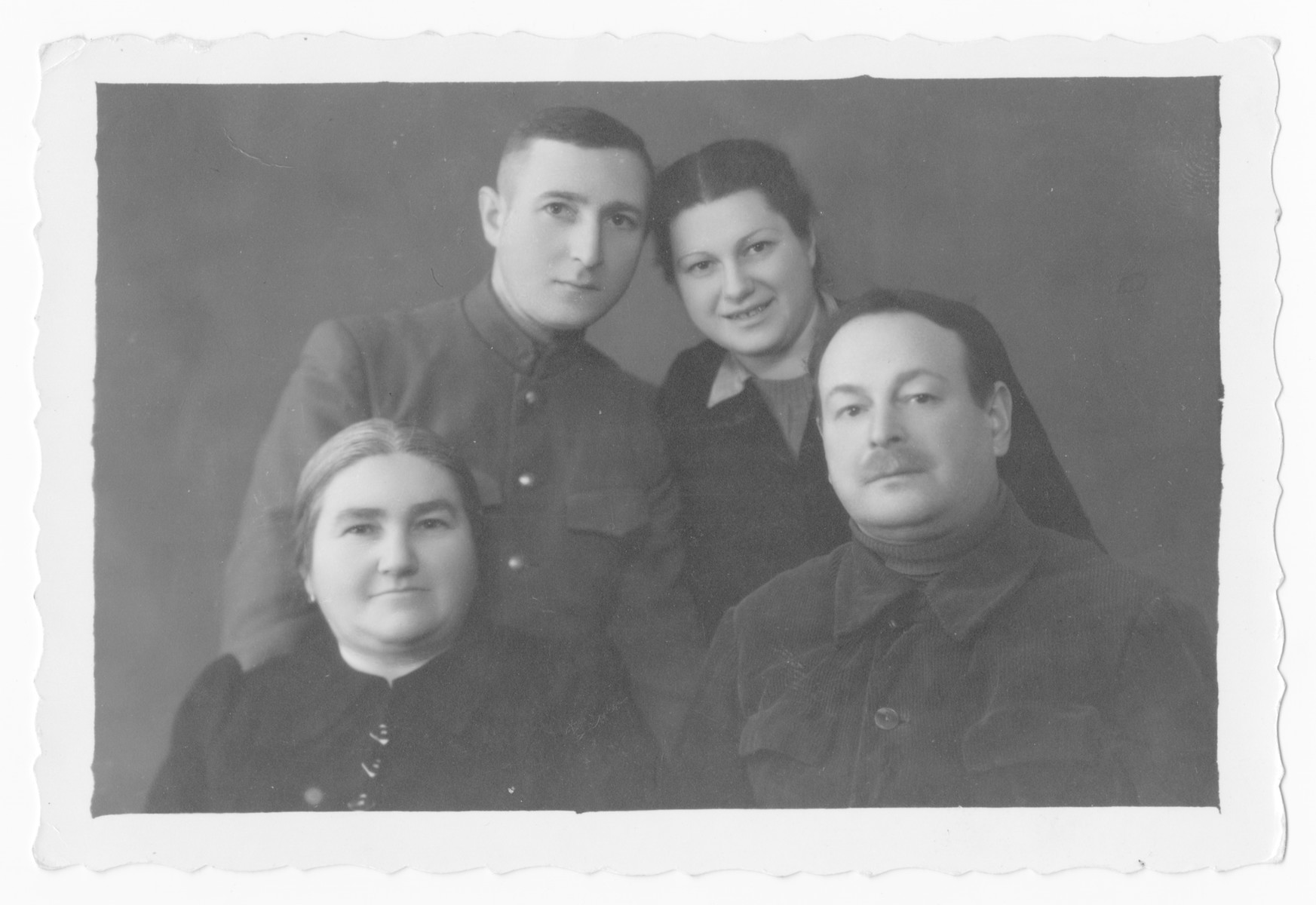 Postwar portrait of the Tenin family.

Pictuured are Moshe and Golda Tenin with their two surviving children, Boris and Klara.

Biography
Klara Dakhis (born Tenin, the aunt of the donor) was born on October 23, 1920 in Odessa, USSR. She was the second child of Moshe Tenin, a hat-maker, born August 23, 1895 and Golda Olga Sukman Tenin, born on March 8, 1900. They had three other children: the oldest son, Boris Tenin (the father of the donor), born in 1918 and two younger daughters: Paulina and Rita Tenin. On June 22, 1941 the Germans attacked the Soviet Union and in August 1941 the Romanian Army besieged Odessa. Boris Tenin had been mobilized into the Red Army approximately in 1937, and he was not in Odessa during the German and Romanian invasion. Moshe and Golda Tenin and their daughters didn't want to leave town. Klara was newly married to a young physician Dima (Dimitri) and gave birth to their daughter, Eugenia, during the siege. On October 16, 1941 the Romanian Army and the Einzatzkommando 11b, entered Odessa. A few days after the Romanians took over the city a bomb exploded in their military headquarters, killing 67 people. As a reprisal the German Einzatzkommando and the Romanian intelligence service brutally murdered about 20,000 Jews, some by shooting and the rest burning alive in a warehouse. In November 1941 the Romanian occupation authorities forced 35,000 Jews into two ghettos at the edge of Odessa: in Dalnik and Slobodka. Many died there of exposure, starvation and disease. Klara's baby daughter, Eugenia, probably died at that time. Rita Tenin hid with non-Jewish neighbors, but she was discovered and killed. In January and February 1942 Romanian police and military deported the surviving 19,295 Jews from the Odessa ghettos to Romanian administered camps in Transnistria. Paulina Tenin was killed on January 2, 1942, probably during this deportation. In 1943, SS detachments of local ethnic Germans murdered Odessa Jews in the camps and ghettos, including Bogdanovka, Domanevka and Akhmetchetka. Moshe, Golda and Klara Tenin survived miraculously near Domanevka in a Karlovka village, till the Soviet Red Army closed on the area in mid-December 1943. Odessa was liberated by the Red Army in April 1944 and the Tenin family received a permit to return to Odessa on April 13, 1944. Boris Tenin met his wife, Mariam Kleinberg, b. December 2, 1923, in Odessa. Moshe Tenin died in Odessa on February 19, 1961 and his wife Golda died on February 25, 1976. Klara and her husband Leonid Dakhis left Odessa for the United States soon after. Mary Tenin Galand was born in Odessa on December 13, 1954. Sher, her parents, husband and son immigrated to the United States on August 9, 1975.