Studio portrait of Benno Raifeld after his survival of Auschwitz and immigration to Palestine. 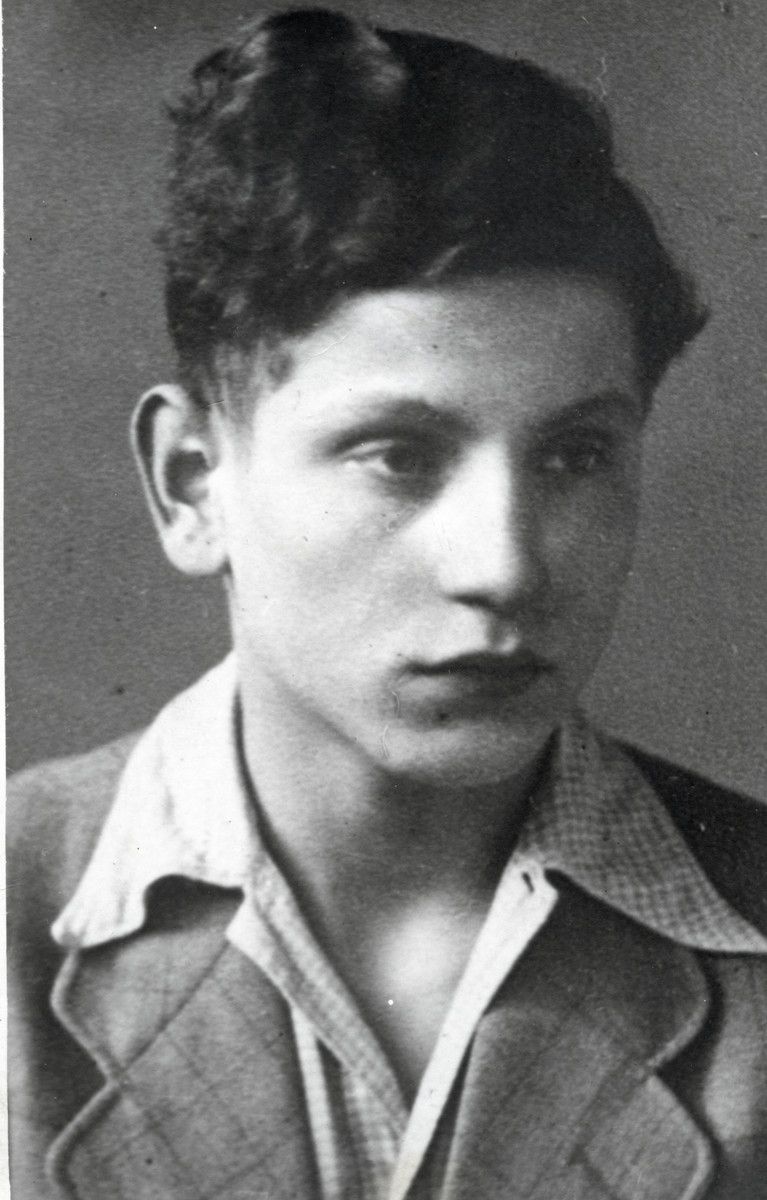 Studio portrait of Benno Raifeld after his survival of Auschwitz and immigration to Palestine.

Biography
Regina Anders Steinitz and her twin sister Ruth were born on October 24, 1930 to Simon Welner (b. 1905 Krakow) and Marta Raifeld Anders (b. November 9. 1905 Berlin). Marta was born Christian but converted to Judaism when she became engaged to Moritz Raifeld.
Simon had three brothers and a sister. His parents died when he was 13 and he went to live in Hamburg, Germany with his sister, Hella Wasserman who was much older and had four of her own children. When he was 18 years old in 1923 he left for Berlin and found work at the photography shop run by Moritz Raifeld. He and Moritz, became close friends. When Moritz became ill with TB and was on his death bed he requested that Simon take care of his wife and two sons, Theo and Benno. Later the friendship between Moritz's widow, Marta, turned into a deep love, and they bore Regina and Ruth at the Charity Hospital in Berlin in 1930. The twins grew up with their brothers as one family. In 1933-34 the couple tried to marry in a civil ceremony but was told by a government official that they were committing "rassenshande". Marta had brought her birth certificate for the occasion which said she was Christian, and they were unable to marry. They left the premises in shock but the fact that they were not able to marry later on saved the twin's lives as well as Simon's.
Simon and Marta continued to run the photo shop for a short time but sold it and opened a flower shop where they made a good living working together. In 1936 the girls were enrolled in the Jewish School on Augustrasse on which street they were also living. Regina sang in the school choir. The boys were sent to the Jewish School on Rykestrasse. At some point Simon received notice that he could not longer work at the story. Since he was not born in German and did not have German citizenship, he had to report to the police headquarters to get a permit to stay in Germany . Often people who went there did not return, and the family feared he would be sent to concentration camp. It was clear that Simon had to leave Germany. Moritz's brother was living in NY and was able to provide him with the necessary papers as long as he wasn't married and had no dependents. Simon left Germany in March 1937. Although Simon's brother, Aaron later sent certificates for Marta and the children to join him it was too late for them to leave.

Antisemitism continued unabated. Most of the Polish Jews living in Germany were expelled to the Polish border, including the father of one of Regina's closest friends Ruth and Theo Fuss. The treatment of the Jews at that time triggered what became known as Kristallnacht. On November 9, 1939 a Christian neighbor of theirs knocked on their door and said that the Nazis were burning all the synagogues and breaking store windows. Benno and Theo ran to the "Kleine" Synagogue to save the Torah scrolls followed by Regina, but they saw others had already rescued the scrolls. They tried to save other holy books by running back and forth from their apartment and storing them in a small corner. After Kristallnacht, Marta's condition worsened; she had contracted TB from her first husband. Theo, just 14 received a letter from the Gestapo that he had to leave Germany in 24 hours. His mother suggested that he go to the Jewish community for advice. They sent him to England on a Kindertransport. He joined a Hachsarah farm training for life in Palestine but was soon drafted into the British army and sent to fight in Italy. Benno remained at home taking care of his mother and the twins. But on January 7, 1940 Marta died. Their Christian uncle, (mother's brother) Robert took the twins to his home. Benno went to hachsharah in Schniebichen and remained there until 1943 when the entire group was deported to Auschwitz-Monowitz Buna. Benno later was sent to Bergen Belsen, survived and immigrated to Israel.
Robert Anders harbored the girls for a short period but knew that it was dangerous for them to remain with him. He approached the Jewish community and they suggested the girls be put in an orphanage on Fehrbellinerstrasse 92 where they remained until 1942. Regina went to Frau Dr. Zilbermann, who had been officially appointed the girl's guardian charge to ask if she could find them a place to live with a Jewish family. They used to go and visit the Graham family on the Sabbath but they had been deported. Dr. Zilbermann placed the girls with the Sher family who were an older couple whose three children had already immigrated to Palestine. Mr. Sher worked in the Jewish hospital while Mrs. Sher remained at home. All the schools had been closed and their whole orphanage was sent on a transport to in the beginning of 1942 to Riga and Auschwitz. Those children above the age of 12 who remained behind were sent to forced labor. Regina and Ruth cleaned bathrooms and offices in the Jewish community. The Gestapo forced the community to write up the lists for the transports. Regina's friend, Sylvia Wagenberg distributed these announcements.
Every day brought new anxieties. They were expecting any minute to be picked up as well. In the beginning of 1943, one day at 5:00 a.m two young men knocked at the door and told the Shers to get dressed and get ready to leave. They were allowed one small bag and were told not to try to escape as police were all around. They dressed in layers and descended the stairs. Downstairs a long line of people were standing in rows. They walked to the collection center at the Grosshamburgerstrasse where they were put into different room and told to sit on the floor. After a while they heard the Sher's name called out by the Gestapo and they were released. Mr. Sher had worked in the Jewish hospital and he was needed. After his release, Mr. Sher was constantly asked why he was walking in the streets and searched for proper papers. He chose to return to the collection point and probably felt remorse having left the twins. Another friend of the girls, was Inge Levy who was there with her parents as well. For some reason they were released. Ruth Anders (Regina's sister) gave Inge a note to take it to her Christian aunt Mathilda. Inge, although wearing a Jewish star, managed to deliver the note and told the twin's Uncle Robert that he must get the girls released. Robert went to the Gestapo and the girls were suddenly called from the room to the office. Upon seeing their uncle they ran up and hugged him. He said "you see these are my nieces" and this is a mistake. Their name is Anders and they do not know who their father is. He signaled to them not to make a sound. After a while the SS conferred and decided to release the girls telling Robert that they should remove their Jewish stars. They were also given a note that they had to report to the Gestapo at Haupburgstrasse a month later and in the meantime they would check who their father was. The girls were separated; Ruth went with their grandmother and Regina with her aunt Mathilda. A month later they reported to the Burgstrasse where the girls' were interrogated by themselves about their father. Was he Jewish or Christian and where was he? The girl's insisted that they didn't know and a few hours later they returned to their respective homes. Not long after they heard that the Burgstrasse office was bombed, and they were able to relax a little. In due time they were liberated by the Russians. They were 14 and half years old. Regina moved to her grandmother's house and later became a kindergarten counselor and a children's nurse. She married Zvi (Helmut) Steinitz (see article in Jerusalem Post) and they have two children and two grandchildren. Both Regina and Zvi are very involved in Holocaust education both in Israel and Germany. Zvi published his memoir "As a boy though the hell of the Holocaust" Hartuung-Gorre Publishing House, Konstanz in 2009. Regina is finishing up her memoirs as well.