Jews from the Eggenfelden displaced persons camp participate in a commemorative march for the victims of a Nazi death march. 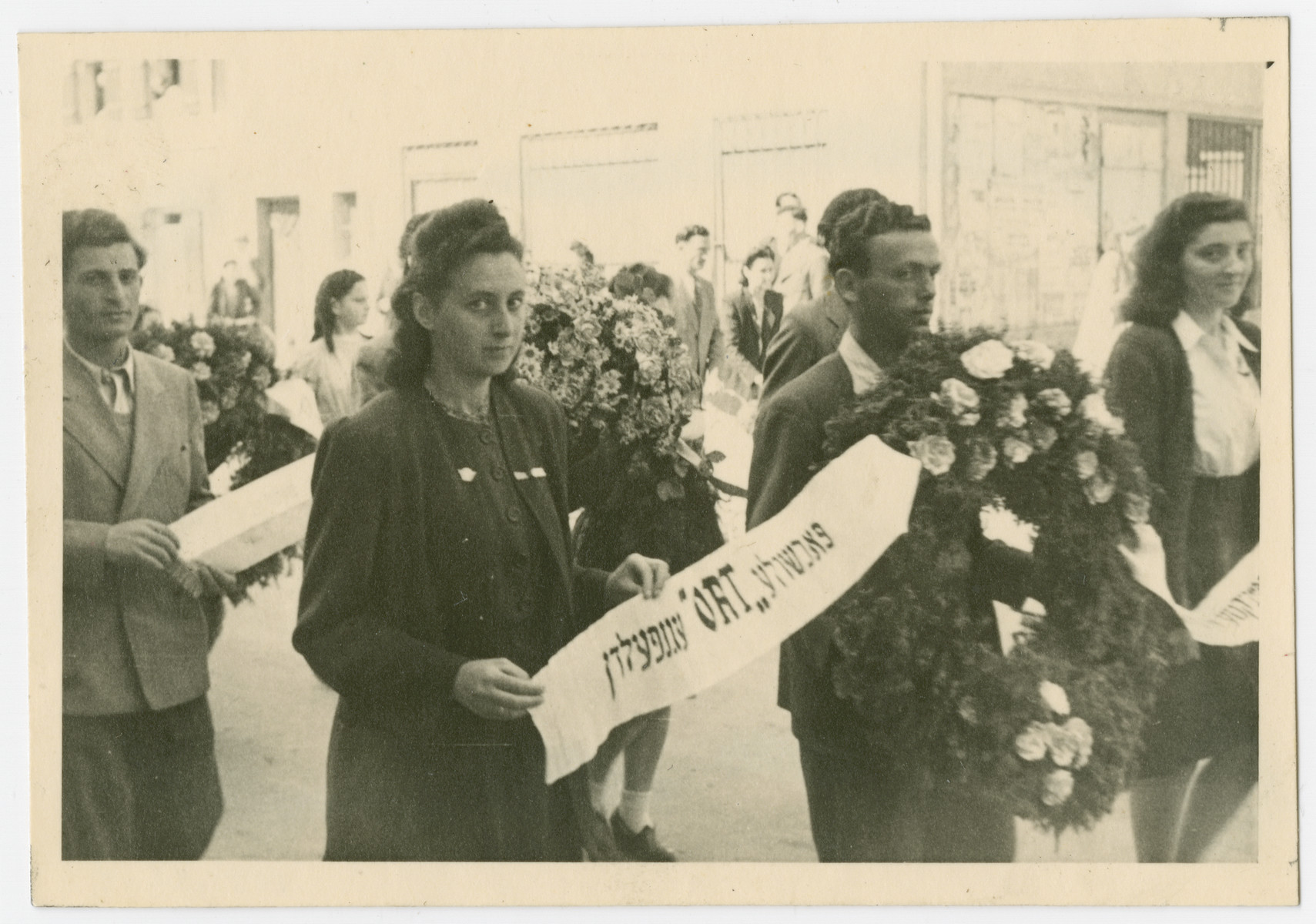 Jews from the Eggenfelden displaced persons camp participate in a commemorative march for the victims of a Nazi death march.

Vera Spitz is pictured on the far right.

Biography
Vera Her (born Vera Spitz) is the daughter of Bela and Irene Spitz, nee Rosenfeld. Vera was born on October 1, 1929 in Debrecen, Hungary where her parents had a wholesale grocery business. She has a younger brother Andrew. The family described themselves as Modern Orthodox, and Vera attended a Jewish school. They lived near her paternal grandparents, Frank and Cecilia Spitz, and the children saw their grandparents regularly. Irene's father died before the war, but Vera visited her maternal grandmother Hannah Rosenfeld during the summer in the mountains. Though there was some antisemitism before the war, by and large Vera's family got along well with their neighbors. However fearing for the future, Vera left her Jewish school to attend a vocational school so that she would have a useful trade. She learned sewing and pattern making. She attended the vocational school until the German invasion of Hungary in March 1944. The Germans immediately instituted anti-Jewish measures; Vera's family had to wear yellow stars, and Bela lost his grocery store. Soon afterwards, the Germans created a ghetto in Debrecen. Though the Spitzes could remain in their old house since it was within the ghetto perimeter other families moved in with them, and the apartment now housed ten people. The ghetto was sealed on May 16, and the family began to run low on food and other provisions. Then Bela was taken away for forced labor. At first they could communicate by mail. However after five weeks in the ghetto, police rounded up all the Jews while other Hungarians stood by and cheered. They were brought to a brick factory where they lived with almost no food, sanitary facilities or shelter for the next ten days. People tried to stay there as long as possible because they saw Allied planes and hoped they would be liberated soon. Vera however wanted to leave as soon as possible since she felt nothing good be worse than their current conditions, and she convinced her mother and brother to board the first train with her. That proved to be fortuitous because the later trains went to Auschwitz, whereas her train and one other went to Austria. After a three day journey without drinking water or a place to sit, they arrived in Strasshof. They had to do heavy physical work in a stone quarry. Luckily they were only there for a week, and then they were sent to Vienna to work in a munitions factory that manufactured anti-aircraft artillery weapons. Though upset at the notion of making munitions for their enemies, Vera and her family enjoyed somewhat better conditions. They lived in a dorm with bunk beds and were fed soup and vegetables. Their Austrian supervisors showed some decency, and one even brought his workers extra food on occasion. However the Germans who were in charge outside the factory were more sadistic. Furthermore, after Allies bombed the factory the workers were exposed to the elements, particularly once winter came. The work at the factory eventually wound down, and Vera was sent to clear up rubble in the streets. She was surprised that many Austrian women approached the Jews and gave them food packages. She, her mother and brother remained in Vienna for ten months and in April 1945 they were sent back to Strasshof. They remained there only a short time before they were liberated by the Russians. However that brought new problems, as the Russian soldiers treated all Hungarians alike, regardless of whether they were Jews or collaborators. Also Russian soldiers began raping as many women as they could find. Vera dressed in her brother's clothing to protect herself. The family went to the Rothschild Hospital in Vienna which served as a gathering place for Jews, but they wanted to return to Debrecen to look for other family members. Jewish organizations there gave them food and helped them return home. When they arrived home, they discovered their home and business were gone. However they received a message from Bela saying he had survived, was in Eggenfelden, a DP camp in Germany and would join them there. It took another year before Vera, her mother and brother managed to leave Hungary. After their reunion in 1946, they looked for ways to come to the United States where Bela had family. In the meantime Vera taught dress and pattern making at the ORT school in Eggenfelden. Bela's brothers immediately sent affidavits and the family expected to leave soon for the States. However the visas never came. Vera went to see the American Consulate General who told her that her father had served in an "unlawful Kangaroo court" where he sentenced people to death by hanging and hence was ineligible. The family appealed the decision but got nowhere. The Consul recommended that Vera and Andrew come alone since they were not affected by the judgment. Though they did not want to leave her parents behind, Vera and Andrew immigrated to the States in March 1950. By this time, most of the other DPs had already left the camp. Vera found a job in the garment district. Vera returned to Germany every year to see her parents out and kept petitioning to have the verdict rescinded. Vera She eventually learned why her parents were not allowed to come. While they were in displaced persons camp, her father had hired a German English tutor for Andrew and her. The tutor had developed a crush on her, and when Vera turned down his offers, he went to the Occupational Forces and declared in revenge that Bela was a Communist. In 1954 Vera married Eugene Herz. Her husband knew Senator Douglas, and he agreed to meet with Vera and a CIA Agent on the day of her wedding. Finally in 1955 her parents received permission to join Vera and Andrew in the United States.
[Source: USC Shoah Foundation interview with Vera Hertz, Interview 13738.]