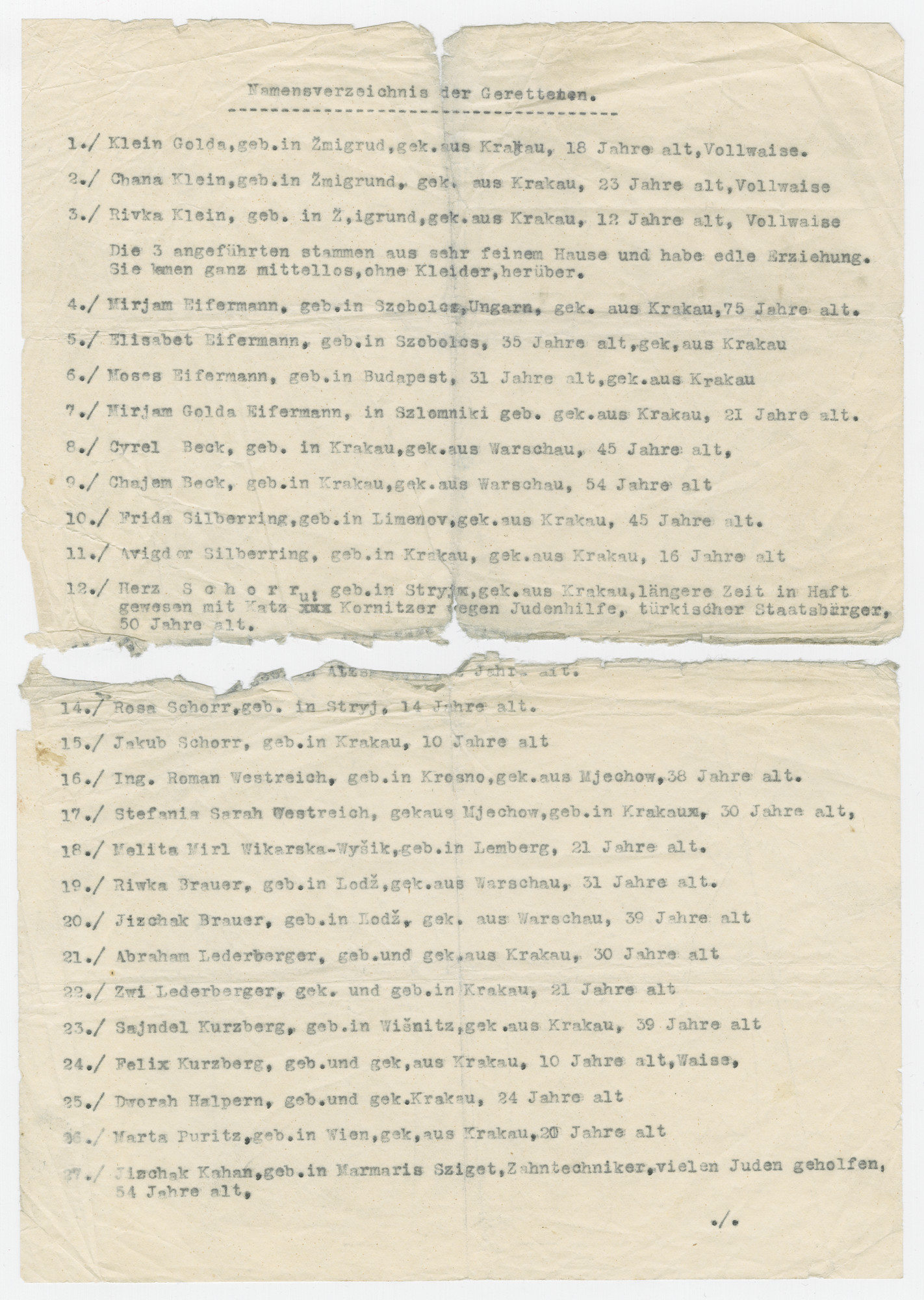 Biography
Ben Zion Colb (born Ben Zion Kalb) was born in 1910. He grew up in Strzyzow and then moved to Nowy Targ. Father His father Reb Abraham Kalb worked as a shochet. He had a younger brother Mendel and two sisters Malka (later Halpern) and Slava (who immigrated to Palestine before the war.) Clara Lieber was born on October 20, 1922 in Stryj, Poland. She had four younger brothers Elimelech, Yoel, Leib and Enzel. She moved to Krakow in 1937 where she met Ben Zion Kalb. They became engaged in the summer of 1939. Clara returned to Stryj before Rosh Hashanah, just before the Nazis invaded Poland on September 1, 1939. Not long after a German policeman beat up Ben Zion Kalb. This gave him a sense of what was to come, and as a result, he fled across the border to neighboring Slovakia. He remained there for the remainder of the war supporting himself through smuggling and currency trading. He also became friendly with Rabbi Michoel Weissmandl, an active member the resistance group known as the Working Group.

Slovakia was the first Axis country to consent to the deportation of its Jewish residents, but these deportations stopped in October 1942 and didn't resume until 1944. During that hiatus, Jews in Slovakia were much safer than in neighboring Poland. Ben Zion wrote to Clara telling her that he would send a smuggler to get her across border. His brother Mendel sent her false papers allowing her to travel, and Clara arrived in Nowy Targ right before Pesach. While staying there, a German shot and killed Mendel. After his murder, Ben Zion's father felt it was no longer safe for Clara to remain there. She went to Wisnicz and then was deported to the ghetto in Bochnia. There she lived in the home that included a member of the Jewish Council named Mandelbaum. On two different occasions, Clara was arrested and freed only through the intervention of the Council. All this time, Ben Zion did not know her whereabouts. Eventually, in early 1943, he made contact via her brothers and wrote to her saying how she could cross the border. Clara took a train to Zakopane. She was a met by a man who hid her in a pig sty until Ben Zion's Slovak associate, Jan Melec, found her and escorted her over the mountains into Slovakia. He brought her to Ben Zion in Kezmarok and gave her false papers with the name Helena Knapikova. She kept this name for the rest of the war.
Clara felt guilty that she had left her two surviving brothers behind in Poland. Ben Zion sent someone to look for brothers only to discover they were no longer there. However he also realized that just as he had brought over Clara, he could also smuggle other Polish Jews into Slovakia. He introduced Clara to Rabbi Weissmandl and others in the Working Group to report on what was happening in Poland. Clara told them of her own experiences, as well of those of a young man she met in Bochnia who had escaped from Treblinka and provided an eyewitness account of the camp. After hearing her report, Rabbi Weissmandl agreed to assist Ben Zion to smuggle Polish Jews into Slovakia through the help of couriers like Malec. They needed to pay the couriers and the people providing quarters. Ben Zion used his own money and Weissmandl secured extra funds from the Working Group and international Jewish organizations based in Switzerland. Ben Zion focused particularly on children, who were then called by some of his comrades, "Ben Zion's Kinder." But he also rescued many adults. Among those he rescued were the Bobover Rebbe Rabbi Shlomo Halberstam, members of his family, the nuclear physicist, Ludwik Wertenstein (who later died during the Russian siege of Budapest in January 1945) and Mr. Landau from the Bochnia Jewish Council. Kalb also sent a messenger to Yitzhak Zuckerman (leader of the Warsaw ghetto uprising) to conduct him and Zivia Lubetkin to Slovakia. They replied saying that they felt they needed to remain in Warsaw. All together, Ben Zion succeeded in rescuing no fewer than hundreds of people, and most likely over 1000.

Rabbi Wiessmandl married Ben Zion and Clara on July 11, 1943. They spent their honeymoon in the Swiss Consulate for a week. Ben Zion then continued his rescue work from his base in Kezmarok, and using her false papers, papers, Clara obtained work in an export-import business located first in Bratislava in then in central Slovakia. All the employees lived and worked together. Two other Jews also worked there as well as an antisemitic German whose boyfriend member of SS. Clara became uneasy that someone would recognize she was Jewish and quit. Soon after, the two other Jews were arrested. By late summer 1944, it became too dangerous for Jews to live openly. Clara found a hiding place with Maria Pobjecky. Ben Zion hid in a bunker prepared under the house of Miklos Vrana, an ethnic-German Slovak. Vrana built the dug-out with own hands. While in the bunker, Ben Zion heard that partisans had liberated Banska Bystrica. He immediately became fearful that Clara would emerge from hiding prematurely and that the Germans would return. His premonition proved correct, but he successfully warned her in time. Ben Zion was liberated in January 1945, and Clara was liberated in April. They reunited and moved to Prague, returning briefly to Poland to search for relatives. None survived. Clara's uncle Yoel Fink who had previously immigrated to the United States send them visas. Ben Zion left first in 1946. However, just as Clara planned to leave, Communists took over and blocked emigration. Clara finally rejoined her husband one and half years later arriving in New York on August 18, 1948. Ben Zion Colb became a successful businessman and active member of his Orthodox synagogue. The couple raised three children, Mark, Melvin and Sherry. Ben Zion Colb died in March, 1973.