Doris Gutheim enjoys a picnic with her teddy bear. 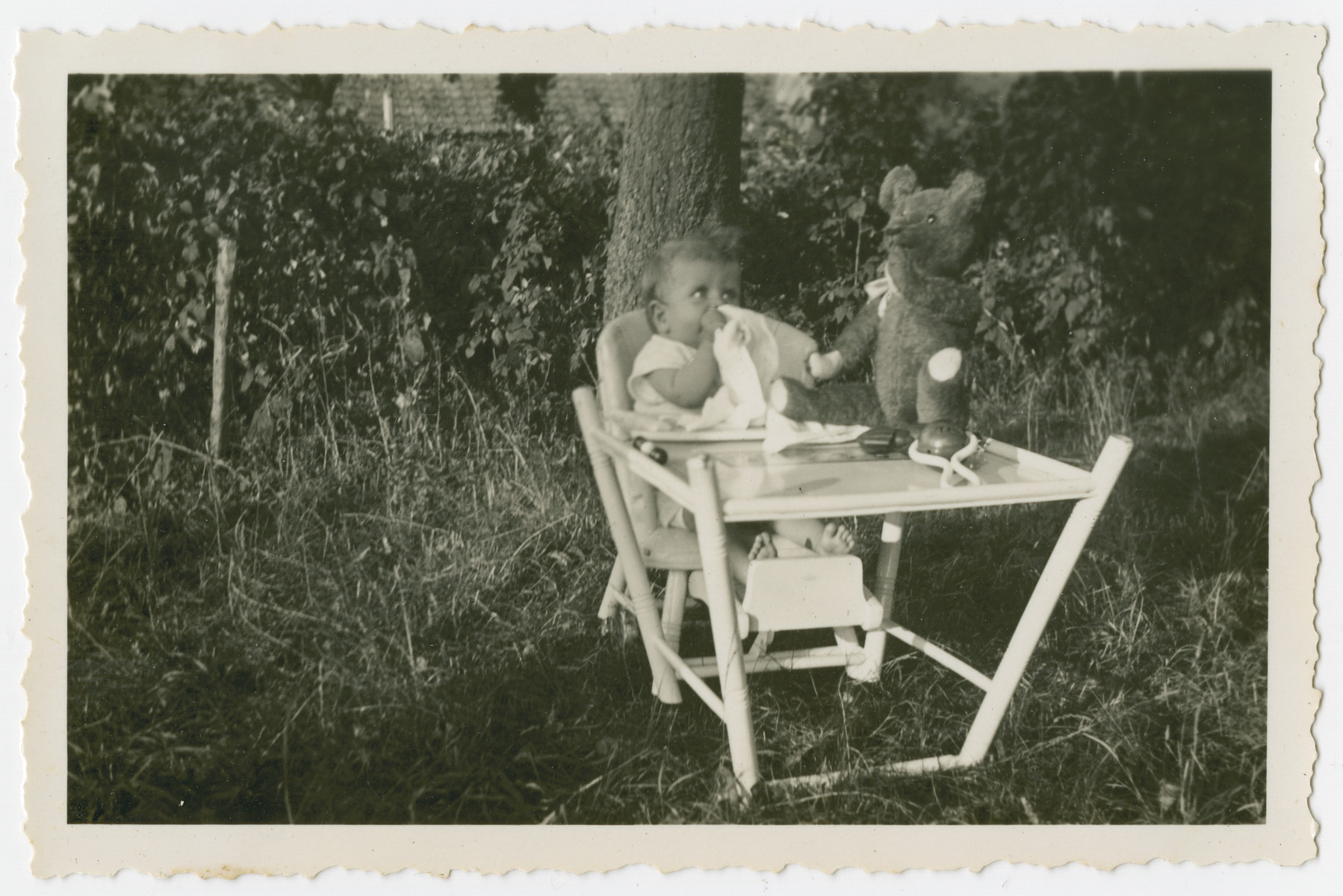 Doris Gutheim enjoys a picnic with her teddy bear.

Biography
Gretel David Kleeblatt, only child of August David and Paula Stern, was born October 27, 1909 in Wuerzburg, Germany. In 1912 her family moved to Berlin where they enjoyed a prosperous life style. When August David was drafted in World War I, Gretel and her mother stayed with relatives in a small Rheinhessen village. The family moved to Wolfenbuettel in 1919 where soon thereafter August and Paula separated and were later divorced. After graduating from a girl's lyceum, Gretel worked in Braunschweig in a ladies clothing store, first as an apprentice and then as a milliner. There she met Walter Kleeblatt.

Walter Kleeblatt (b. 1902) was the son of Solomon Kleeblatt and Helene Alexander. Walter had two siblings: Arthur Kleeblatt (b. 1896) and Edith (b. 1907) Hirsch. The Kleeblatt family lived in the village of Salder (today a part of Salzgitter, a city in Lower Saxony) where they owned a textile store. Solomon founded the business together with Helene's brother, Isaak Alexander who married Solomon's sister Henriette. Solomon died in 1917 and Isaak in 1918. Helene therefore needed help running the business since Arthur was disabled and Walter too young to take over. Her nephew Julius Gutheim, a soldier in World War I, became her business partner. He and Walter later managed the store together.
Walter and Gretel became engaged May 1932, and in December 1932 Walter's sister Edith became engaged to Walter Hirsch. Edith and Walter Hirsch married November 5, 1933, and Gretel and Walter married January 14, 1934. Gretel's paternal uncle Rabbi Moritz David, the rabbi of Bochum, performed the wedding. Hitler's rise to power in January 1933 had already affected the family. The Nazi party was popular in Salder, and the Kleeblatts who lost customers due to the boycott of Jewish business had to close the store in 1935. In 1935 the family moved to Hannover where Walter and Gretel shared a small apartment with Helene and Arthur, and Walter worked at a Jewish Bakery. In November 1937 Gretel and Walter received visas for the United States, and in February 1938 they sailed to America on the SS Manhattan with the hope that the Hirschs - Walter's sister Edith, her husband and son - would join them.
In January 1938, the Hirschs moved in with Helene and Arthur. After Germany invaded Poland, the Hirsch family illegally crossed the border into Belgium in October, 1939 to await visas and ship passages to the States. In May 1940, Germany invaded Belgium. Walter Hirsch was arrested and sent to Saint Cyprien, an internment camp in France. From there he was transferred to Gurs and Drancy and eventually to Auschwitz where he died, unaware of what happened to wife and child. Already ill with cancer, thirty-four year old Edith died in 1941. Her young son Werner was placed in the Jewish orphanage on Rue des Patriotes in Brussels and later in an orphanage in Wezembeek. On October 30, 1942 the Gestapo raided the orphanage and arrested the children including Werner. The children were later released owing to the intercession of Queen Elisabeth of Belgium. The CDJ (Jewish Defense Committee) found safer places for the children, and Werner survived the war living under a false identity in a children's home in southern Belgium.
In November 1939, Helene Kleeblatt and her son Arthur were moved to the former Hannover Jewish orphanage, now an old age home. On July 1, 1942, her German citizenship was revoked and any remaining assets declared property of the state. On July 23, 1942, Helene and Arthur were deported to Theresienstadt where Helene died. Arthur died in Auschwitz.
August David, Gretel's father, died in May 1939 in Sachsenhausen where he had been incarcerated since June 1938. Paula David, Gretel's mother, was deported from Leipzig to Lublin; she died probably in Treblinka. Rabbi Moritz David, August's brother, and his wife fled to England in 1938. After the war, Walter and Gretel tried to locate Walter's nephew Werner. After placing an ad in the Aufbau, they found him with the help of the Red Cross and brought him to the United States in 1946. Of the extended Kleeblatt family, beside Gretel and Walter, only Werner survived.
Source: Gretel's Albums: The Story of the Kleeblatts, a German-Jewish Family from Salder (http://www.birdstage.net/pdf/gretels_albums.pdf).