Stanislaw Aronson poses on a street with his dog, 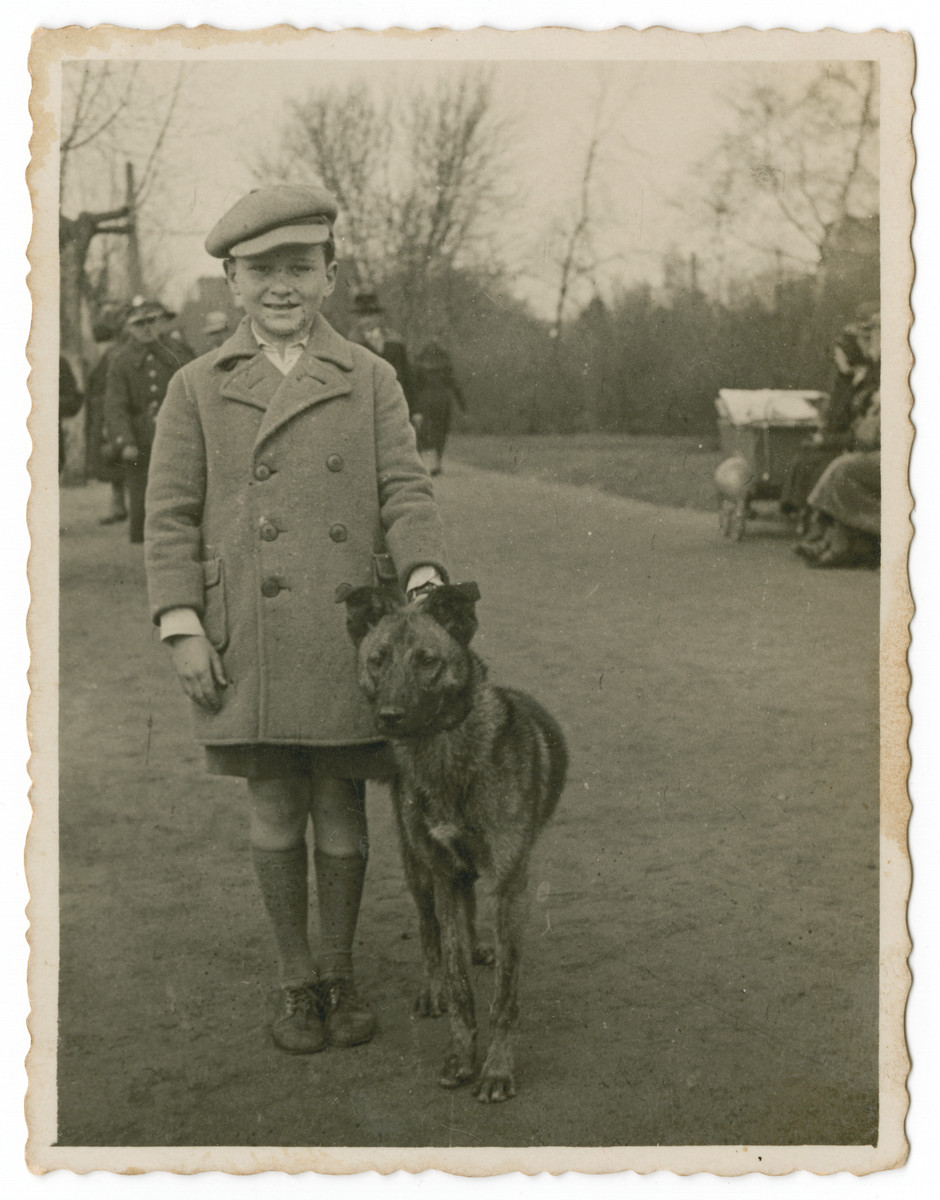 Stanislaw Aronson poses on a street with his dog,

Biography
Stanislaw Staszek (Shlomo) Aronson is the son of Waldemar Aronson and Helena Kaffeman. He was born in Warsaw, Poland on May 6, 1925. The couple married in 1919 and their older child, daughter Janina Janka was born on May 6, 1921. The Aronson family was a well off Warsaw Jewish family with close ties to the Lodz textile business. All four of Staszek's grandparents were observant Jews, but none of their children stuck to the rules of Judaism. Both the Aronson and the Kaffeman families celebrated all the Jewish holidays out of respect for their older generation. The Aronson family lived in the building, which belonged to Abram and Fryda Aronson, but in 1931 they moved to Lodz, where Staszek's father conducted most of his business. They settled on one floor of the house, which belonged to Jakub and Sara Kaffeman, Helena Aronson's parents, at Zeromskiego Street in Lodz. Two of Helena's brothers: Leon and Beno lived there as well. About the same time Abram Aronson moved to Tel Aviv in Palestine and two of his sons and one daughter. One daughter: Relka Warszawska, Mieczyslaw and Rafal Aronson and of course Waldemar Aronson with his family remained in Poland. On September 1, 1939 Germany invaded Poland and the Aronson family started on their journey eastwards - first to Warsaw and then to Rowno, where they spent a few months contemplating what to do next. They finally reached Lvov. Staszek started to attend school. The Aronson family managed to avoid a deportation to the east by the Soviets. In June 1941 Germany invaded USSR and reached Lvov on early July. Helena's parents fled Lodz to Warsaw and wrote to their daughter to return to Warsaw. They described the conditions as "livable." In the fall of 1941 Staszek, his parents and sister were smuggled out of Lvov and into the Warsaw ghetto. Staszek found employment in "Astra" adding machines factory in the ghetto, but in July 1942 he lost this position. He and his father started to work in a labor gangs outside the ghetto, which was a back-breaking work with minimal food. Janka, Staszek's older sister moved out from their apartment at 36 Chlodna Street. She just disappeared, which probably meant that she was caught during the mass deportations of July and August 1942. On January 18, 1943 the Germans renewed the deportations of Jews to Treblinka. Staszek and his parents were forcibly taken by the SS to the Umschlagplatz and placed them in the school building. One wing of the school served as children's hospital and the other as a waiting station before deportation. Staszek ventured to another part of the building to find out a more information about the destination of the transport. When he wanted to return to his parents, he was beaten by the SS-men and he never saw his parents again. He was pushed into a wagon and he noticed a small unsecured window. He was very thin and he started to plan his escape. The train left the station around 5 AM and after 15 minutes or so it stopped. Staszek pushed toward the opening and squeezed himself out. In a second he was out and under the train. He made a run toward the woods when the search lights were aimed in a different direction. He spent the rest of the night in a wooden chapel and in the late morning Staszek gathered courage to approach a house. The Polish man fed him and didn't ask any questions. He walked Staszek to a small train station and 20 minutes later Staszek was in the center of Warsaw. He spent one night in a homeless shelter where a young man yelled: "You are a Jew." Staszek gave him his leather jacket and a watch with Hebrew inscription, which he received from his grandfather Aronson as a bar mitzvah gift in 1938. He became Rysiek Zurawski and later Zukowski. Staszek was accepted into the elite "Kedyw" unit (Kierownictwo Dywersji) Sabotage Division of the Polish Underground AK (Home Army). His activities are described in "Years of Turmoil" by Patrycja Bukalska and Stanislaw Aronson, published in Krakow in 2010. Staszek fought in the Warsaw Uprising during which he was severely wounded in early August 1944. After the liberation Staszek relocated to Lodz, where he wanted to enroll in medical school, but very quickly he realized that he didn't want to live in Communist Poland. With the help of the "Bricha" he reached Austria and later Italy, where he rejoined the Polish Army in exile. In September 1946 Staszek traveled to Tel Aviv to visit his father's family who came to Palestine at different times before the war. A year later he was officially discharged from the Polish Army and in 1948 Staszek enlisted in "Hagana", which later became the Israel Defense Force in May 1948. Staszek fought as an officer in the War of Independence of Israel. He served in IDF reserves as Lieutenant Colonel. Staszek Shlomo Aronson and his wife Margo Fratkin Aronson reside in Tel Aviv. They have two children: Lana and Matty.