Group portrait of boys in a school in poswar Esslingen, Germany. 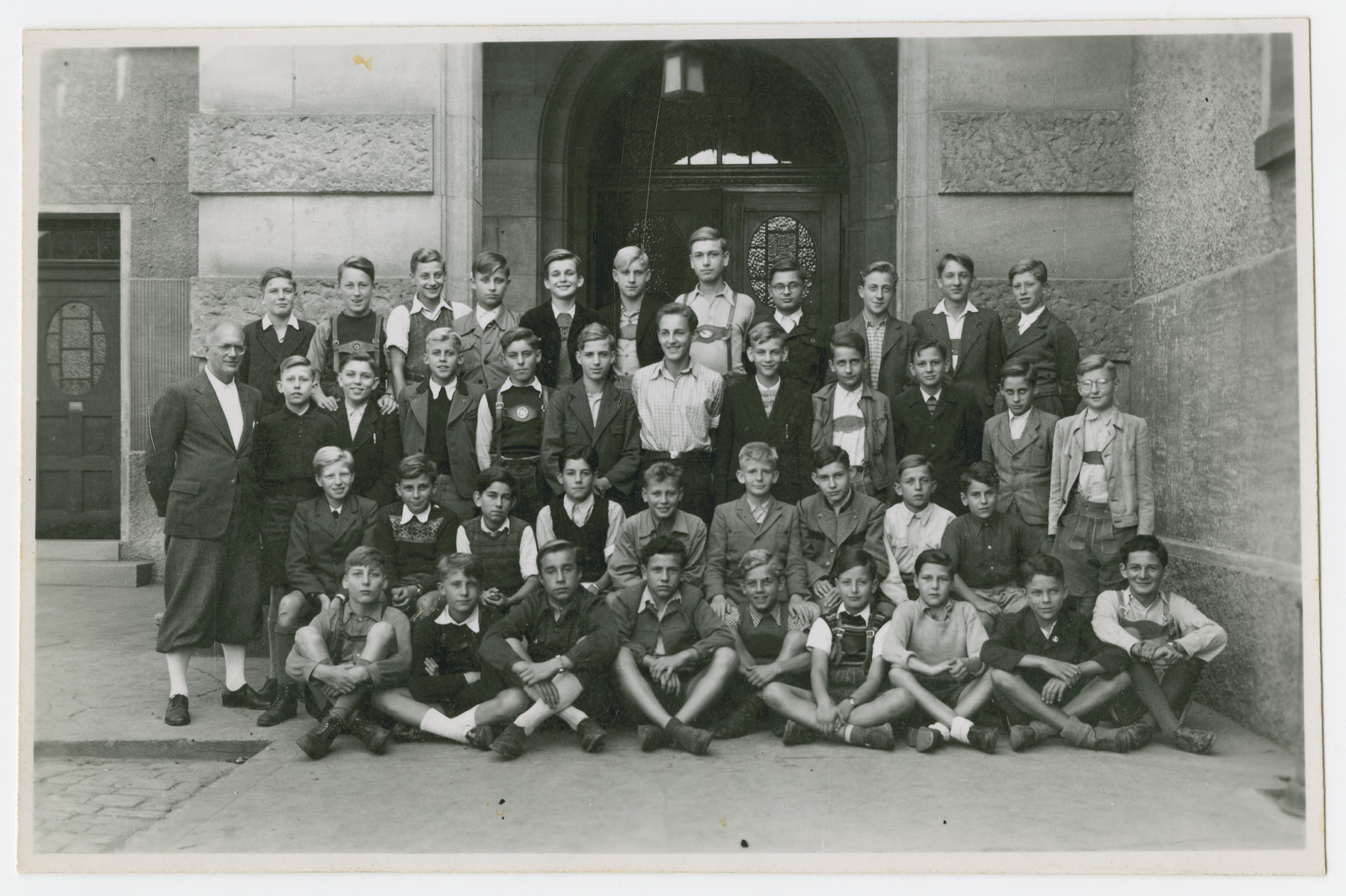 Group portrait of boys in a school in poswar Esslingen, Germany.

Jerzy Ogurek is seated at the bottom right. He was the only Jew in his class.

Biography
George Zimmerman (born Jerzy 'Jurek' Jakub Ogurek) is the son of Alexander Ogurek and Karola Fiszer Ogurek. Alexander and Karola married on April 16, 1932, and Jerzy was born was born on October 20, 1933 in Katowice. The family shared a home in Bedzin with Karola's parents, Izak and Helene Fiszer. Alexander worked for an insurance company in Katowice, and Izak Fiszer owned a leather store. In September 1939, the family fled by train to Kielce before returning home after one week. Germans soldiers occupied two rooms of their home. Alexander and Izak continued to work. Alexander worked as the supervisor of a German leather factory and Karola worked there as the bookkeeper. This left Jurek alone during the day. The family had lived near the train station, but after orders restricted Jews from the streets they were had to move south near the slaughter house. In March 1943, they were forced to move into the ghetto in Kamionka, near the iron smelting factory. A few months later, on August 1, 1943, the Germans began the final liquidation of the ghetto. The family hid in an attic with some 20-30 people. After a week their hiding place was discovered, and they were taken to the old leather factory and joined hundreds of others in the yard. There they found Karola's brother, Max who was taken with his family to Auschwitz where they were murdered.

While working at the leather factory, Alexander obtained false papers, and Jurek was hidden at the factory. One day, the Ogureks and the Fiszers bribed a German guard and left the factory via the back door. They went to the railroad station, and boarded a train, where they were eventually met by a Polish man at Tatra Mountain. They then traveled at night on foot, through snow to Slovakia. All five of them carried passports for Paraguay. They were left in a forest, where a Slovak peasant picked them up. The peasant took them by hay wagon to the train station, and they finally arrived in Zilina in October 1943 where they stayed with a Jewish family together with other Polish Jews.
Later they traveled by train and later on foot across the Slovak-Hungarian border to Budapest, where they remained for a few months, settling temporarily in the village of Cileoghedz. In March 1944, the Germans entered Hungary. The family headed back to Slovakia, where they were caught by the border police and turned over to the German Army who placed them in a Polish POW camp. They were released by the camp commandant and returned to Budapest. In April 1944, they again attempted to return to Slovakia. Successfully arriving in Bratislava they lived near a refinery. After it was bombed they decided to return to Hungary only to again the Germans. This time they were sent to the Sered forced labor camp. Alexander and Izak were identified as Jews, Karola and Helene as Aryan, and Jurek as a mischlinge. Neugebauer, a German guard who had previously worked at the leather factory in Bedzin, was assigned to work at the Sered camp. He identified the entire family as Jewish. In November 1944, they were deported from Sered to Birkenau (Auschwitz). Once they arrived, for a few days the family was able to remain together.

The family was then separated, and Jurek at first remained with his father and grandfather but then moved to the children's block along with approximately 300 other children ranging in age from 6-14. A German prisoner gave Jurek extra food, as did Alexander, but it was stolen from him. For the first few weeks, Jurek was able to see his father every day. Jurek then came down with scarlet fever and was placed in the camp hospital block where he was treated with aspirin. He never saw his father or grandfather again. By January Russian troops neared Auschwitz. Alexander Ogurek and Izak Fiszer were forced on a death march, during which they both died. Stasiek Ogurek, Alexander's brother, was also in the hospital, where he found Jurek and was provided him with food and clothing. On January 15th, the SS came to the hospital and rounded up the Jews and Russian POWs. The Russians were shot, and the Jews were marched into a field. They were asked who could walk 10km, and those who could not were shot. The remaining 2000 children and sick adults were marched along with 20 guards. After a while they stopped, and trucks picked up the guards. The group then remained alone and returned to Auschwitz I. On January 27, Soviet troops entered Auschwitz and liberated the remaining prisoners. Three days later, Stasiek took Jurek to Krakow, where he left his nephew with the Polish Gawlinski family. Stasiek disappeared; he was imprisoned as a collaborator after being denounced by a Pole. Jurek remained with the Gawlinskis for the next month attending fourth grade in a Polish school.

In the spring of 1945, the Jewish Committee found Jurek, and paid the family for his upkeep. A group of young Jews took Jurek in. They found a man who brought Jurek to Budapest, so he could search for people who knew his parents. He was placed in a Shomer Hatzair orphanage. The orphanage was going to Germany, and on the way in Prague, Jurek's mother found him. Karola and her mother both survived the concentration camps. They moved to Kavnitz, a small DP camp, and visited the Bergen Belsen DP camp. In January 1946, Helene Fiszer died in the Belsen DP camp as a result of falling from stairs. Karola and Jurek lived in Kavnitz for a year and then moved to Esslingen. On December 6, 1947, Karola married fellow survivor, Chaskiel (Charles) Zimmerman who adopted Jurek.