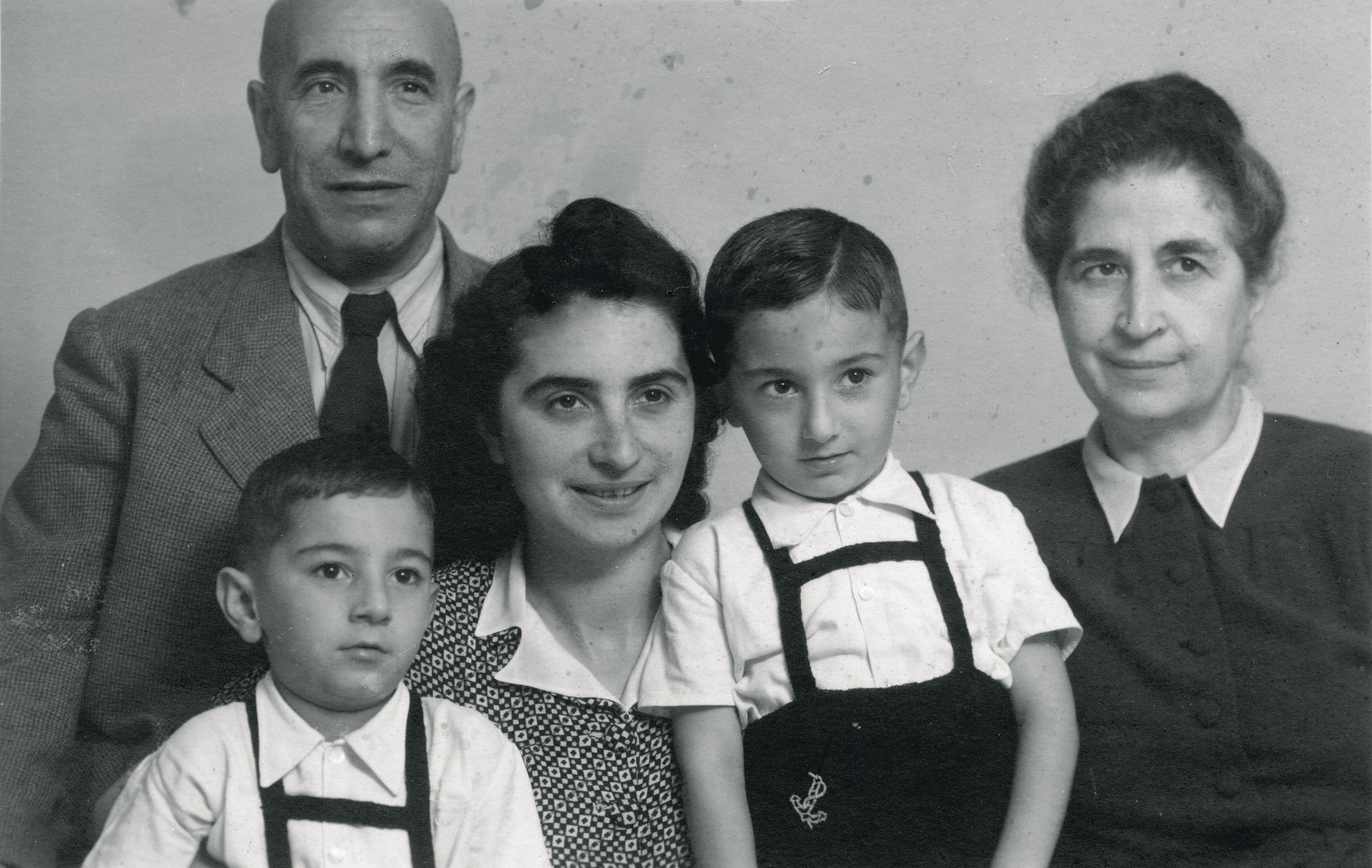 Pictured are Ella (Kabilio) Finci, her twin sons, Shmuel and Avraham Finci, and her parents, Albert and Blanka Kabilio.

Biography
Shmuel and his twin brother Avraham were born on September 21, 1939 in Sarajevo to Ella Kabilio Finci (b. October 8, 1915, Osjek) and Moshe (Buky) Finci (b. 1903, Split). Moshe was an architect. After finishing his studies in Rome, he relocated to Sarajevo and worked for the municipality. Ella worked in her father's clothing store, Firma King in Sarajevo. She met Moshe when he came to the store and asked her help in choosing a tie. He then asked to meet her in the evening. They married in 1937 in Sarajevo in the Sephardi synagogue. When the Germans entered Bosnia and Herzegovina in April 1941, Shmuel's mother wore an armband and sent to work in the kitchens for the Germans. She worked there a few months until the summer of 1941. Shmuel's father then told them to leave Sarajevo for Spilt which was under Italian control. The twins and their mother left in a horse and buggy. Ella dressed as a peasant and the kids were told to say their names were Prerad and Nenad even though they hardly spoke. When they arrived in Split, they probably joined an aunt. Each day, Ella went to the bus stop to see if her husband had arrived as promised. After a month, he friend told her he had been sent to the Jasenovac concentration camp.

From Spilt the three managed to go to a village in southern Italy called Kornje. They stayed there for about a year and a half with the twin's two grandfathers, paternal grandmother and an aunt and uncle. The family had escaped with gold coins, and when their supply was depleted they opened a sandals workshop. Also, each month Ella went to Torino where she received subsidies from the head of the Olivetti factory. They remained in the village until mid-1943. When the Germans conquered Italy, and Mussolini surrendered, the locals told then to leave. Part of the group, including one grandfather and the boy's uncle Chaim Finci, hired a smuggler to cross over the Alps to the south of Switzerland. They remained there until the end of the war where they lived in some sort of hostel Kurwalden supported in part by the Joint. Shmuel's paternal grandparents did not go with them but remained in Italy until the end of the war hiding in a cellar storage room.

At the end of the war, the family returned to Yugoslavia to see what had happened to the rest of the extended family. Ella learned that both her brother and husband had been murdered in Jasenovac. A year after the war, Ella married her brother-in-law Chaim Finci (b. May 1905). He was a very good father to the twins even though they continued to call him Uncle Chaim, as they had for the first five years they were together. From 1945-1947 they lived with Chaim's family in Belgrade and then they moved to Sarajevo to be with Ella's parents. Chaim was a building engineer. However it was hard living with Ella's parents who were still mourning the loss of their son. Shmuel and his brother, mother and paternal grandparents immigrated to Israel in 1948 and were taken to an immigration center in Talpiot . Ella's parents remained in Sarajevo.
Chaim worked in the lab for photogeometria where he analyzed aerial photos. He died in 1957 of cancer. Ella worked for her first half year in Israel as a maid and then studied mechanical drawing. She worked for the Jewish Agency until she retired. She died in 2008. Avraham, Shmuel's brother became a land surveyor, and Shmuel became a social worker and worked for Btuach Leumi. He has three children and seven grandchildren, and Avraham has two children and three grandchildren.