View of the shipwrecked Pentcho on the island of Kamilonissi. 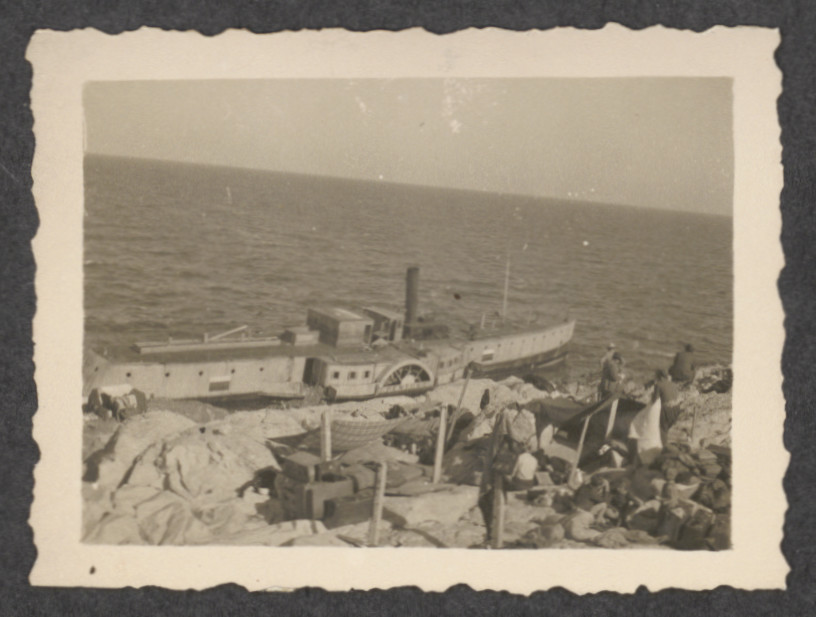 View of the shipwrecked Pentcho on the island of Kamilonissi.

Event History
The Pentcho was an 85 year-old paddlewheel steamer hired by the Revisionist Zionist movement to bring Jewish refugees to Palestine. It departed from Bratislava on May 18, 1940 with some 400 Slovakian Jews and proceeded down the Danube. A few weeks later it picked up over 100 Austrian Jews at the seaport of Sulina, bringing the total to some 510 Jewish refugees. The Pentcho left Sulina on September 21 and after a stormy crossing on the Black Sea, it passed the Dardanelles and reached the Greek port of Mytilene (Metelin) on the island of Lesbos. After the ship was ordered to leave without refueling, the passengers wired the Committee for the Relief of Refugees (CRR) in Athens stating their predicament. They headed for the port of Piraeus, where the CRR arranged for a delivery of food and fuel. The Pentcho left Piraeus on October 3 and four days later reached the port of Rhodes where they were reprovisioned by the Italian authorities but ordered to leave the following day. A few days later, on October 9, the ship's boiler exploded, and the ship broke in two off of the deserted island of Kamilonissi in Dodecanese territory, then under Italian control. The passengers and crew were able to get ashore and off-load their supplies before the ship finally sank. Five men took the ship's only lifeboat to look for rescue. Though they were caught in a storm and lost their bearings, they were eventually rescued by a British destroyer and taken to Alexandria. When the CRR learned about the wreckage of the Pentcho, it alerted Greeks in Herakleion who then endeavored to have supplies delivered to the stranded refugees on Kamilonissi. On October 18 and 19, Italian authorities picked up the refugees on two sorties and brought them to the main island of Rhodes where they stayed for the next year and a quarter in a hastily constructed camp in the soccer stadium of Rhodes. Then, in January 1942, the refugees were transferred to the Ferramonti internment camp in southern Italy. They were kept there until the Allies captured Italy. Most of the Pentcho's passengers arrived in Palestine in June 1944, but twenty-four of them were among the 1000 refugees brought to the US in 1944 aboard the SS Henry Gibbins and sheltered at Fort Ontario. The Pentcho was the last illegal immigrant ship sponsored by the Revisionist Zionist movement. Afterwards illegal immigration to Palestine was organized by the Mossad, the Organization for Illegal Immigration.
https://encyclopedia.ushmm.org/content/en/article/jewish-aid-and-rescue.
Biography
Rudi (Rudolf) Fellner (the father of the donors) was the son of Eugen (Jeno) Fellner (1888-1942) and Stefanie Sohr Fellner (1887-1974). Eugen grew up on the streets of Vienna without much education. He later supplemented his income as an entertainer, singer and magician. Stefanie's father, Julius Sohr, owned a knitting and garment store. They manufactured various women's accessories. She was one of four daughters and all the sons-in-law, including Eugen, went into his business. Eugen and Stefanie married in 1912, and Rudi was born July 6, 1913. Rudi was an only child but grew up together with his cousin Fred Freiwirth. Fred's mother was one of Stefanie's sisters. In addition to elementary school Rudi also studied music and piano at the conservatory until age 13 when he began private lessons with the young composer, Erich Zeisl. As a teenager Rudi would stand at the back of the opera and follow along with the score. By age 16 he began opera coaching. His father wanted Rudi to study law, but he was uninterested and they compromised on pharmacy. It soon became clear that Rudi was unsuited to this profession, and he decided to pursue his passion, music. He attended the Hochschule fur Music and Darstellende Kunst and received a degree in conducting, but it was difficult for him to earn a living. He conducted a symphony the day before Hitler marched into Austria. The following day an agent called to ask if he was racially pure. Rudi replied that he was a racially pure Jew, and the agent hung up. Another day, five young Nazis stopped him on the street while he was enroute to give a private lesson. They made Rudi wash the floor with a toothbrush and threatened to send him to Dachau. Luckily, a former classmate came by and Rudi was released. He then decided that he had to leave Austria. He obtained a passport and on July 8, 1938 flew to Italy. He entered the country on a temporary visa valid for only a few months, but he ended up staying over a year. At first he supported himself as a domestic and then got a job correcting German translations of Italian operas. He received papers to Bolivia only to discover they were invalid. Eventually he received an affidavit to come to America from a distant cousin, Arthur Wise. He then moved to Genoa, supporting himself with various odd jobs while seeking passage to the States. By then WWII had started. On September 25, 1939 he received passage on Conte di Savoia and sailed out of Europe. He arrived in New York on September 23 1939.