Group portrait of a Soviet soldier and liberated prisoners, some holding weapons, in the Buchenwald concentration camp. 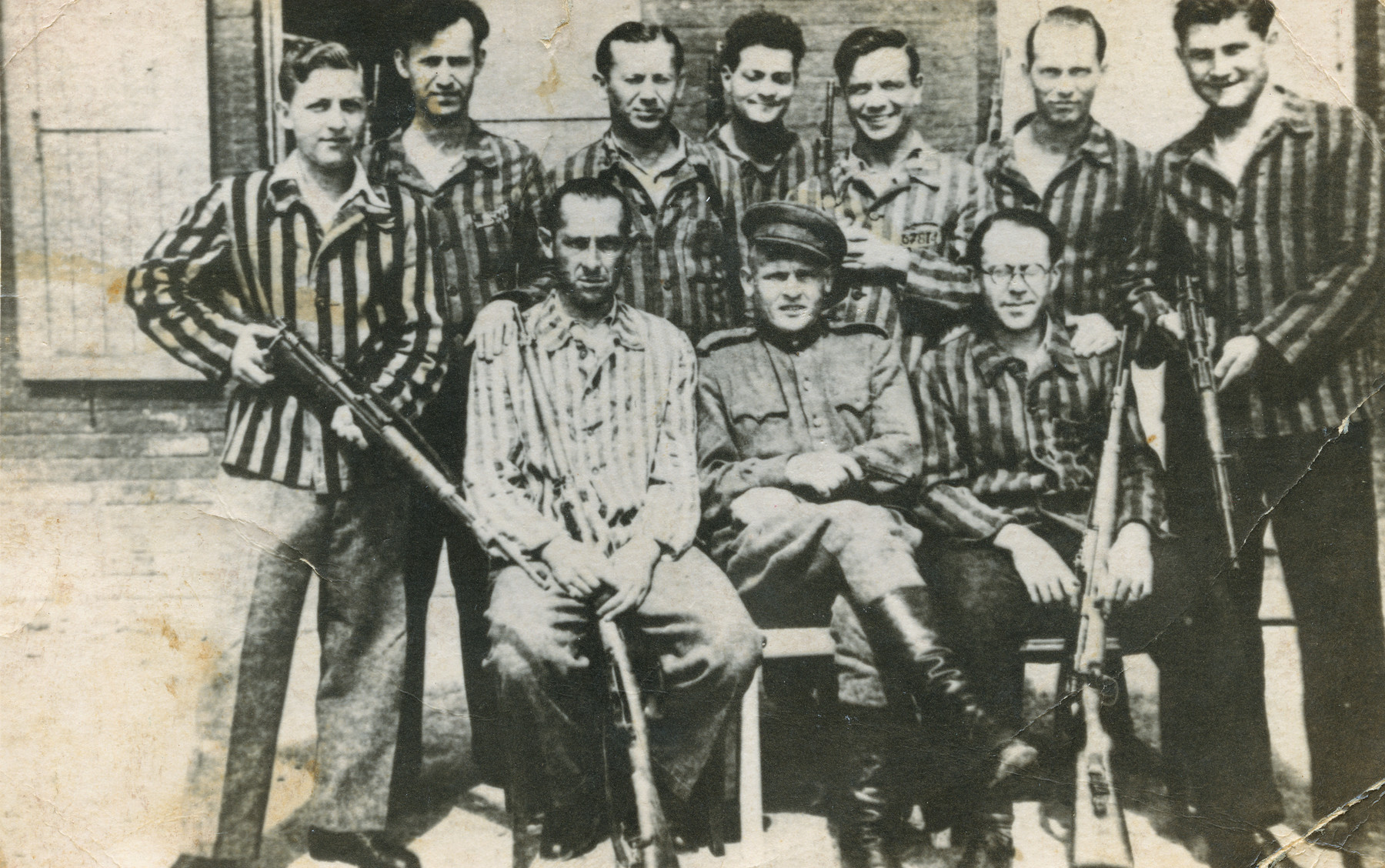 Group portrait of a Soviet soldier and liberated prisoners, some holding weapons, in the Buchenwald concentration camp.

Henrich Drabinowski on the left holding a rifle.

Biography
Hanan Arnon (born Hans Drabinowski, the husband of the donor) and his twin brother Heinrich (later Henry Draben) were born on April 17, 1926 in Berlin, Germany to Peter (Perec) Drabinowski, and Bluma Slascom, both originally from Krakow, Poland. Bluma came from a very religious Hasidic family, but Hans' family was not very observant. His parents were married in Krakow but relocated to Berlin where all four children were born. The twins had an older sister Lillie (b. 1924) and an older brother Leo (b. Feb. 1925).

In 1939 Han's father, Peter, was sent to the Oranienburg concentration camp. Bluma remained in Berlin with all of her children, but realizing the dangers facing them, Bluma began to disperse the children. Lillie managed to get to England, possibly on a Kindertransport as she was 15 in 1939. Hans was sent on a Kindertransport with a group of some 30 children to Denmark, where he was placed in the home of the Christensen family in Kalenburg (Northern Denmark). The Christensens had four children of their own but willingly took in Hans. When the Germans entered Denmark in 1941 the Joint collected all of the Jewish children, as it was dangerous, and sent them to Marseille and then to Beirut since they were not allowed to enter Palestine. The children were then smuggled one by one from Beirut to Haifa, where they were sent to a children's home. Hans was then adopted by a religious family by the name of Fein who sent him to study "electricity". He was then drafted into the Haganah and was in the War of Independence. When he left the army in 1949 he obtained an apartment in Ashkelon from the army together with a few friends who all lived together. Shortly thereafter he met his wife Caroline, who had immigrated with her family in 1949 from Egypt.

Hans had by then changed his name to Hanan, and had no idea what had become of his family and his twin brother. He refused to talk about his background. Caroline saw that every year he received a card with a letter from Denmark. In 1962 she begged her husband to share some of his story with her and still he was reluctant. She eventually persisted and wrote to the Christensen family for some information. Somehow they tracked down Hans' brother (both had changed names which made it difficult) and found out that he and his father lived in New York City. In 1967 they received their first telephone call from Henry (Heinrich) and soon afterwards he came to Israel to meet them. Consequently they invited the Christensens to come to Israel as well as to meet both brothers.
After Hans went to Denmark, his family was sent to Krakow, where they were in the ghetto from 1940 to 1941. His mother Bluma perished, but father and two brothers were deported to Plaszow and in August, 1944 were sent to Buchenwald where they were liberated. Heinrich worked in ammunition factories and also was a butler to a German commandant. Their father, who was a tailor, worked as such in the camps and this helped him survive. After the war Perec and his two sons went to the Zeilsheim displaced persons camp before immigrating to the United States in 1947 on board the Marine Perch.

Having been separated for so long Hanan and his wife decided to spend a year in New York City. One year became 39 and the couple finally returned to Israel in 2007.