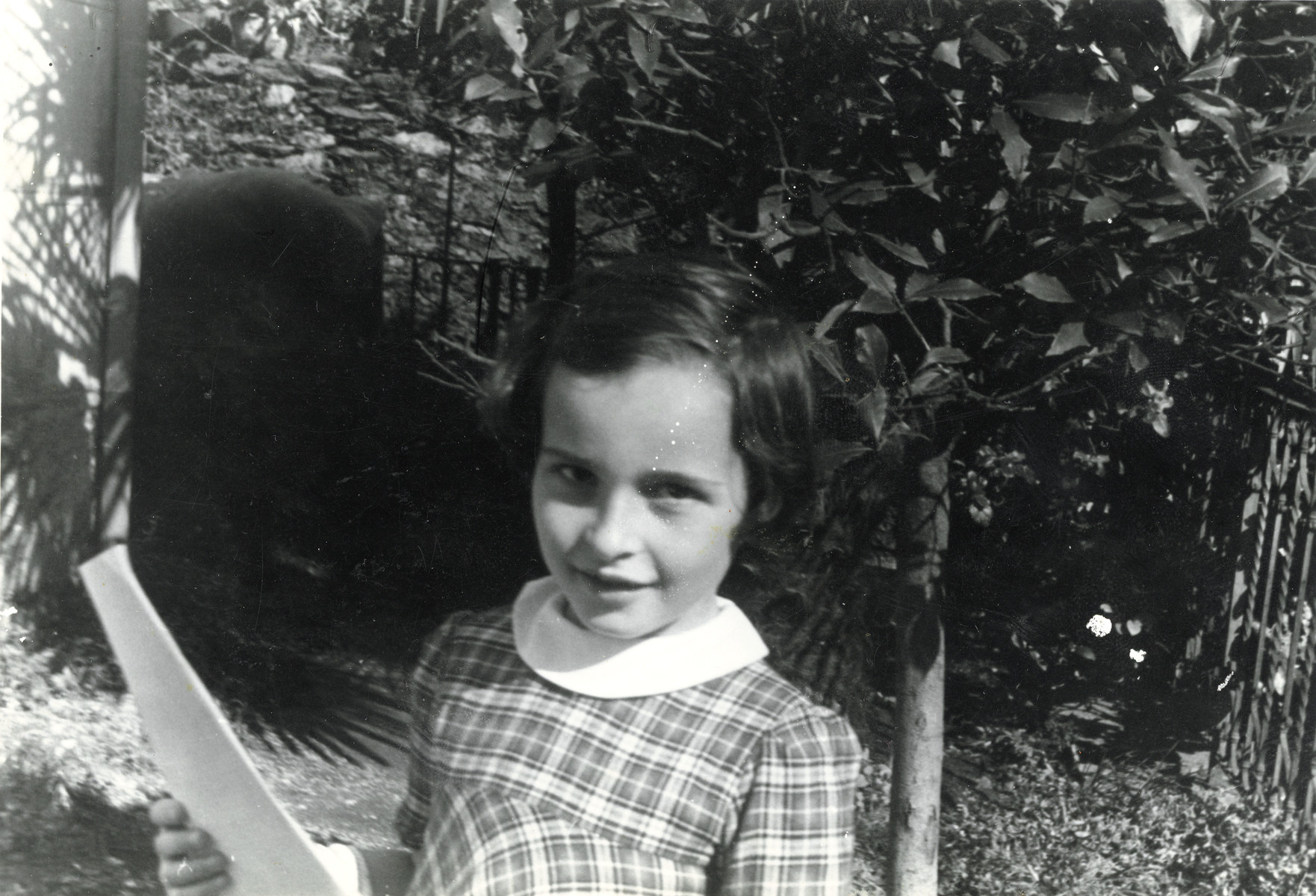 Biography
Mirjam Manojlovic (born Ermann) is the daughter of Toni Katzenberg (b. Duisberg. April 9, 1908) and Leo Ermann (b. Feb. 5, 1899). Mirjam was born on October 8, 1935 in Duisburg, Germany. She has two younger sisters: Suzanne (Shulamit, b. January 23, 1941, Lyon, France) and Henriette (Chana Ermann Amir-Finkelstayn, b. July 30, 1945, Switzerland). Leo came from a well-to-do family; his father had various businesses and factories dealing in wood and men's wear and owned stables in Saarbruken. They were cultured and spoke French and German. Leo, who represented the family affairs also was a journalist and writer. In 1939, not long after Kristallnach, Leo was interned in Dachau for a month, but because the family had an affidavit for Shanghai, his wife Toni managed to arrange his release. He then left on his own for Italy and tried unsuccessfully to escape to Spain. Instead he entered Belgium where he reunited with his wife and daughter. They remained in Brussels for a year. In May 1940 with the German invasion of Belgium, they escaped to Paris. Leo's parents had been in Luxembourg where they were living as emigres and were not allowed to buy or rent an apartment and hence moved to Paris. Leo and Toni joined them there.

Leo sensed it was not safe to remain in Paris, and after a month they fled to Lyon in the hope of eventually crossing into Switzerland. For the next two years, they lived on the outside of Lyon on Rue Des Petites Soeurs. Suzanne was born there in 1941. Mirjam attended school and learned French. All during this time, Leo looked for escape routes. By then the borders had closed for refugees. He had contact with members of the resistance; in particular with Joseph Lancon, a Catholic widower living with his children on a farm in Veigy-Foncenex, near the Swiss border. Lancon organized the "Douvaine escape network" which smuggled hundreds of refugees to Switzerland. As it was too dangerous for the family to leave as one unit, Leo left first with Mirjam. They took a train towards Annemasse, descending the previous stop and walked to the village of Veigy where Leo was told that Father Jean-Joseph Rosay would keep them for a few days until someone else brought them to the border. One night late in November 1942, Leo picked up Mirjam and followed Joseph Lancon to the border. Leo carried Mirjam on his back as they crossed a stream. On the other side, a Swiss border guard stopped them and took them for interrogation. Mirjam, speaking French, asked if she could find some dry socks for her father. Upon hearing her perfect French, the guard became sympathetic and allowed them into the country. They were taken to a Swiss relief center where they were given a Swiss flag and chocolate. However they were kept in a damp, cold room with straw mattresses and soon Mirjam was covered with lice. She developed a high fever and was brought to the infirmary. After she recovered, she was taken to a children's home in Ascona run by Lili Volkart. The children received wonderful care but had to report monthly to the police. Leo was sent to Hedingen, a labor camp for refugees.

Mirjams's mother Toni left Lyon a month after her husband together with Suzanne. She stayed with the Lancon family, and Therese, Joseph's 17 year old daughter, accompanied them over the border. Toni became ill crossing the stream and was sent to a hospital to recuperate for several months. Suzanne was sent to the same children's home as Mirjam and they reunited. At the beginning of 1943 Toni was sent to a women's camp Brissago where she remained until the end of the war.

After the war, the family remained in Switzerland for several years but could not become permanent residents. Leo headed a branch of ORT in Lugano assisting refugees, he also wrote for various newspapers. On June 12, 1949 the family immigrated to Israel on the ship Kedma. They went to the immigration camp Shaar Aliya and then moved to Jerusalem.
Joseph Lancon and his comrades paid dearly for their heroism. On October 5, 1943 the Germans arrested Therese, but she was freed after a few days. Then on February 10, 1944, Lancon together with Francois Perillat, Father Rosay and Father Figuet were arrested after informers tipped the Germans. All but Figuet were deported to a death camp where they perished. On May 16, 1989 Yad Vashem recognized Joseph Lancon and his daughter Therese Neury-Lancon as Righteous Among the Nations.