Survivors and American soldiers attend an exhumation and reburial ceremony of the victims of the Pocking concentration camp. 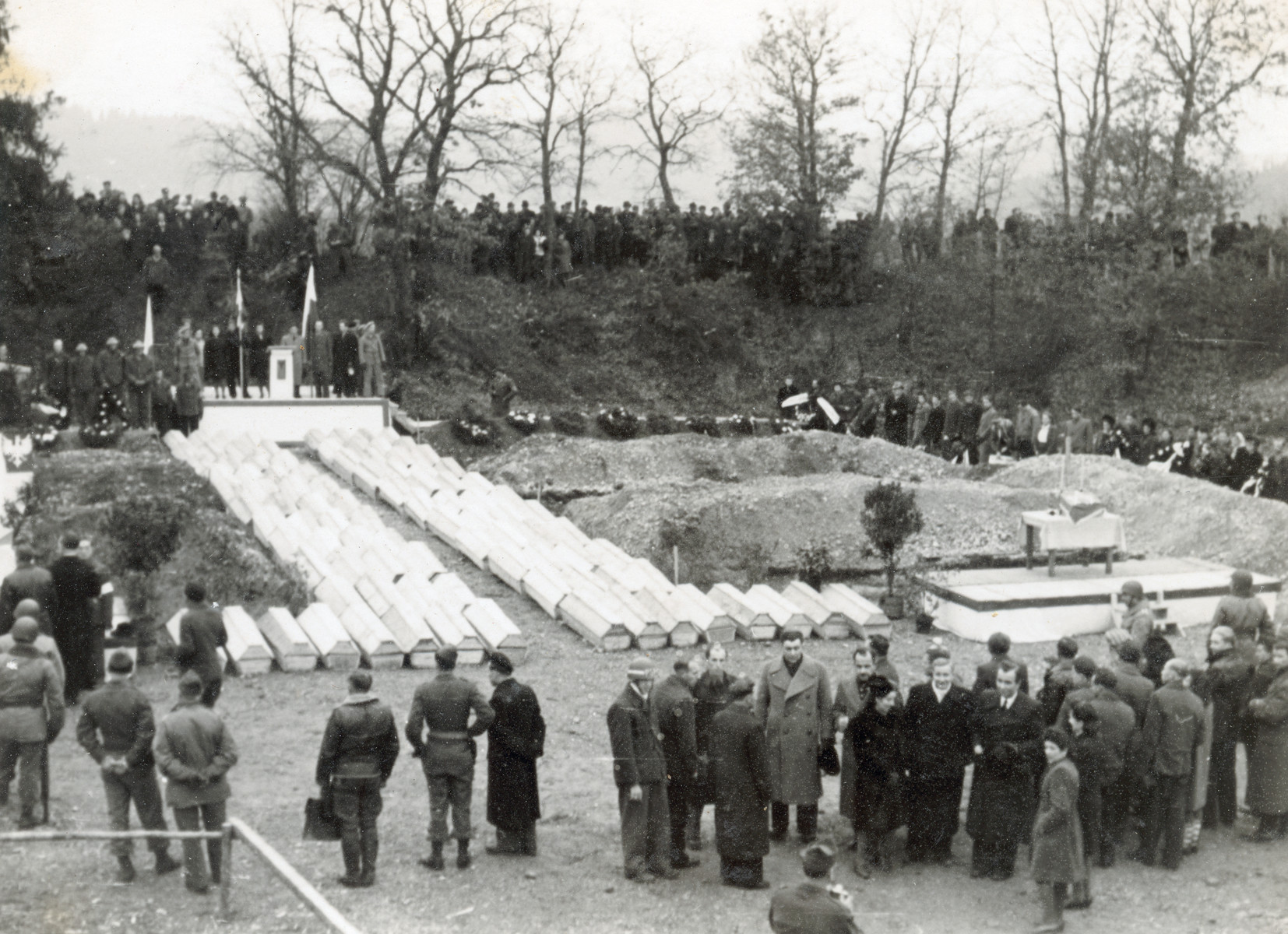 Survivors and American soldiers attend an exhumation and reburial ceremony of the victims of the Pocking concentration camp.

Biography
Miriam Meisels was born on July 30, 1941 in Budapest, Hungary to Rabbi Yehuda Lipot Meisels (b. April 10, 1910- d. Israel 1993) and Sara Piroshka Hakohen Zuckermandel) b. January 4, 1919, Budapest- died Israel 1988). Miriam had one sister, Yehudit (b. Budapest February 24, 1940). Shimon Chaim, Yehuda's father was married to Sara Leah and moved from Poland in order to become the Dayan of Szeged. Yehuda was born in Szeged, but his older siblings were born in Poland. Yehuda married Sara in 1938 in Budapest. Yehuda also owned an antique store. Though he served as a rabbi in the Hungarian army, he was forbidden to own any property in Hungary as his parents were from Poland. Therefore their apartment was registered in the names of his wife and daughters.

When the racial laws came into existence his antique store was aryanized. However, the family was able to remain in their apartment which eventually became a yellow star house. In 1942 Yehuda was found to be helping Jewish refugees who were hiding in the basement of his home. It was believed that a Jew reported him to the authorities, and he was slated to be executed. However, his wife managed to obtain an audience with Horthy and had his sentence commuted to forced labor. He was sent to a labor camp where he collected land mines but also served as the rabbi of the labor camp. At some point, his wife Sara Leah learned that some men had been released for home leave and she decided to go to the commandant of the camp and successfully pleaded for her husband to be allowed home. However, Rabbi Meisels was on one of the first transports of Hungarians to Auschwitz in 1944 where he was incarcerated for nine months.

Miriam, her sister and mother remained in their house under curfew and wearing yellow stars until they were transferred to the ghetto. Living conditions were extremely crowded and for three months there was no garbage collection. Sara Leah hid the girls in the cellar of the ghetto in order to protect them from frequent round-ups, and Miriam recalls how her feet froze and she couldn't walk. One day they were caught by a guard and told to report the next day for deportation. Her mother realized what this meant. She covered the girls' mouths with tape and pillows and she put them in the garbage and told them to remain there until she returned. They girls cried themselves to sleep. The next day their mother was lined up and marched to the train station with a suitcase in hand, but somehow she dropped the case and ran until she was out of sight. Miriam is not certain exactly how she escaped, but she retrieved the girls from the garbage cans and found refuge in bombed out houses. They could not go out during the day. They remained there for another three months until the Russians arrived in Budapest. They were then able to return to their apartment only to find two other families living there but they were able to move in with an aunt, Hentzche Danzinger, who had an apartment in the same building. Leah Sara registered their names with the Jewish community so they would be on the list of survivors. Still it was dangerous to be on the streets due to the presence of the Russians.

Yehuda Lipot was sent from Auschwitz on a death march to Pocking, a sub-camp of Flossenbuerg, to work on an air force base. By liberation, he was so weakened that he was taken for dead, and his body was thrown on a mound of corpses. However, an American soldier, Sidney Chachmaster, noticed that he was blinking his eyes. He pulled him out and sent him to a hospital to recuperate. Yehuda vowed he would never go back to Hungary, but he met someone in Pocking that was returning to Budapest to look for his own family. Yehuda gave him his wife's address, and the man managed to find her and give her the information that her husband was alive. Leaving the girls with their aunt and grandmother Sara went to Germany to look for husband. She then returned home and brought her daughters to Germany to reunite with their father. Yehuda, had been appointed the religious authority in Pocking. As Pocking had been a forced labor camp, many Jews who worked there were murdered and their bodies flung into a mass grave. Yehuda decided to move them into a Jewish grave based on lists that he had. But he made sure that non-Jews were buried in a separate place, in a Christian ceremony conducted by a priest.

He also worked to rehabilitate Jewish spiritual life. He officiated at weddings of hundreds of couples, even releasing married women from vows whose former husbands' fates were unknown. He also helped survivors to immigrate to Israel and established a memorial in Pocking for those murdered. In 1947 a march of survivors from Pocking took place which bore the names of those murdered. American liberators also attended the memorial. In 1949 the Meisels family immigrated to Israel. They arrived by plane and were sent to a Maabara in Rehovot and then to a hotel for in Tel Aviv. Due to the humid weather in Tel Aviv the family relocated to Jerusalem where the donor's brother Chaim was born in 1949 in Hadassah hospital. Yehuda found work with the Ministry of Interior; at that time Social Services. Miriam today is the head of the Child Survivors Organization YESH.
Though Miriam's immediate family survived, her maternal grandfather Joseph Zuckermandel Hacohen did not. Much of Rabbi Yehuda Meisels' family also perished. His brother Menachem Moshe Meisels was killed in the Warsaw ghetto at the age of 33 with his wife Sara Zeisel and their son Avraham David. He had been a professor and rabbi in a university in Germany and Austria. Yehuda's sister Esther (Estee) her husband Yehuda Stern and son Abraham David, and his sister Tzirel and husband Zvi Goldstein and their children all were gassed in Auschwitz. Yehuda's brother, Shlomo Elimelech and his two daughters also died in Auschwitz. Finally his sister Friedel was killed together with his mother Sara Leah. His father died a natural death before the war.