Musia and Leah Szklut stand in front of a river in Naliboki [possibly to do tashlich -- the ceremonial casting of sins performed on Rosh Hashana]. 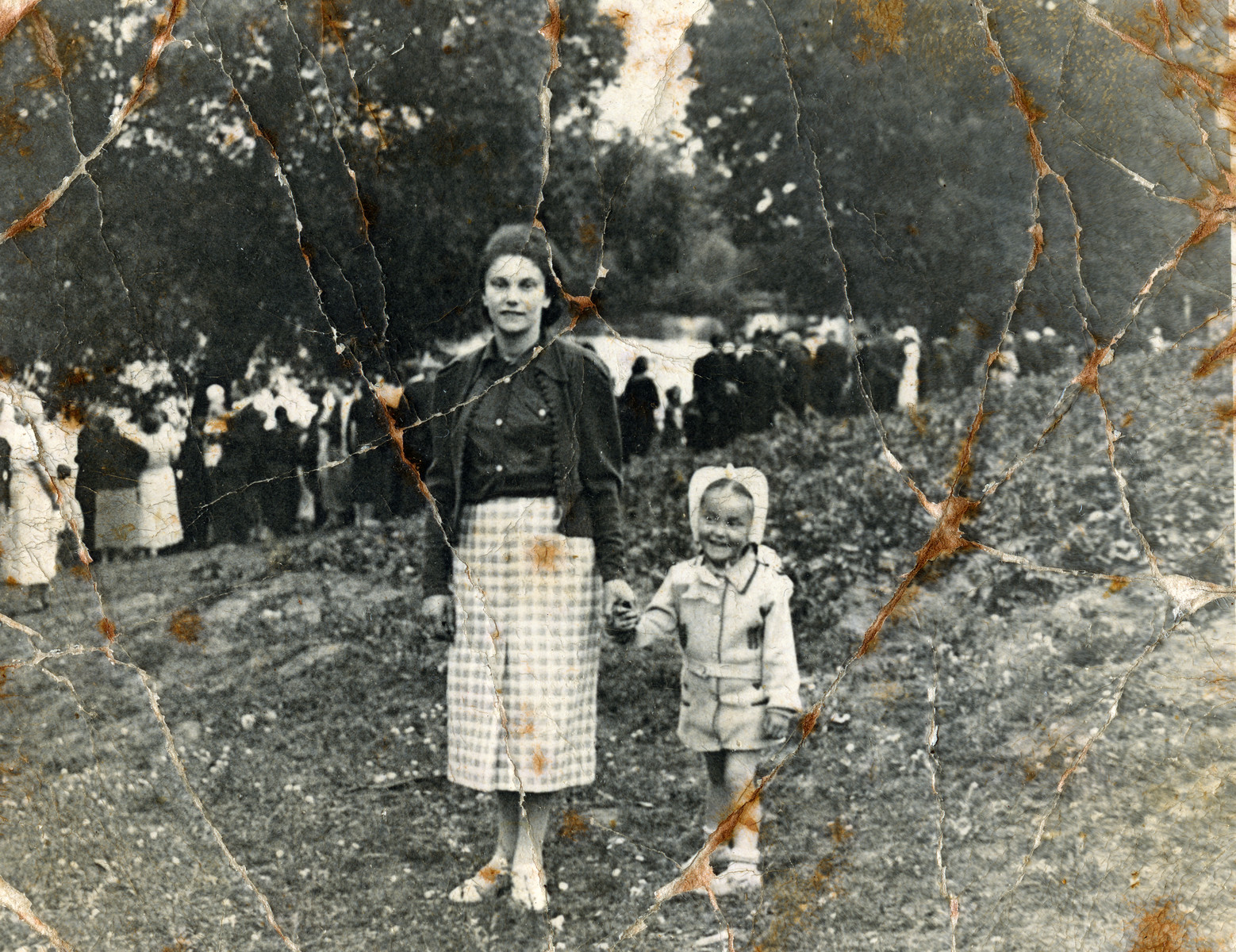 Musia and Leah Szklut stand in front of a river in Naliboki [possibly to do tashlich -- the ceremonial casting of sins performed on Rosh Hashana].

The mother and child were both killed during the Holocaust.

Biography
Hanna Meirman (born Szklut) was born to Zvi Hirsh Sklut (Szklut b. 1898/ or 1900 in Naliboki, Poland) and Ida Lapidus (Greengrog) Sklut. Her father grew up in an Orthodox home and attended the Volozhin Yeshiva. He was one of five children of Moshe and Fruma-Hana Szklut. Hana had a good business sense and the couple owned bee hives, fruit trees and a grocery store. Moshe was quite religious but also an ardent Zionist who worked on behalf of Keren Kayemet and Keren Hayesod. He had hoped to immigrate to Palestine and even bought some Palestine bonds. Zvi Hirsh had been married to Musia Aginiski and had a daughter Leah. At the onset of WWII all of his siblings were married. Zvi Hirsh and his family were sent first to the Rubshevitz ghetto and then to Novogrudok ghetto where his wife and child were murdered. Leah was only six years old. Zvi managed to escape to the partisans in the Naliboki forest. He participated in partisan battles against the Germans and was wounded.
Hannah's mother, Ida Lapidus had been married to Noah Greengrog; he perished with their two children Bella and Mordechai. They had been in the Minsk ghetto. Their daughter was shot and their son gassed by a mobile killing squad. Ida managed to escape to the woods and joined the partisan camp set up by Shalom Zorin from Minsk where she worked as a nurse. Shalom had fled the ghetto to the Koldanovo Forest after the mass murder of the Minsk Jews on November 7, 1941. Together with the escaped Soviet POW Semyon Ganzenko they established a Jewish partisan battalion composed mainly of those who escaped from the Minsk ghetto.
In 1944 Hannah's mother met and married Zvi Hirsh Sklut in Baronovichi, and Hannah was born on September 2, 1945 in Ebinitz. They made their way to the DP camp of Muenchenberg and later to Bergen-Belsen. They arrived in Israel on April 3, 1949 on the Atzmaut ship via Marseille. They first lived in an absorption center and then moved to Bnei Brak. In Israel Zvi Hirsh worked in the Ponevezh Yeshiva.