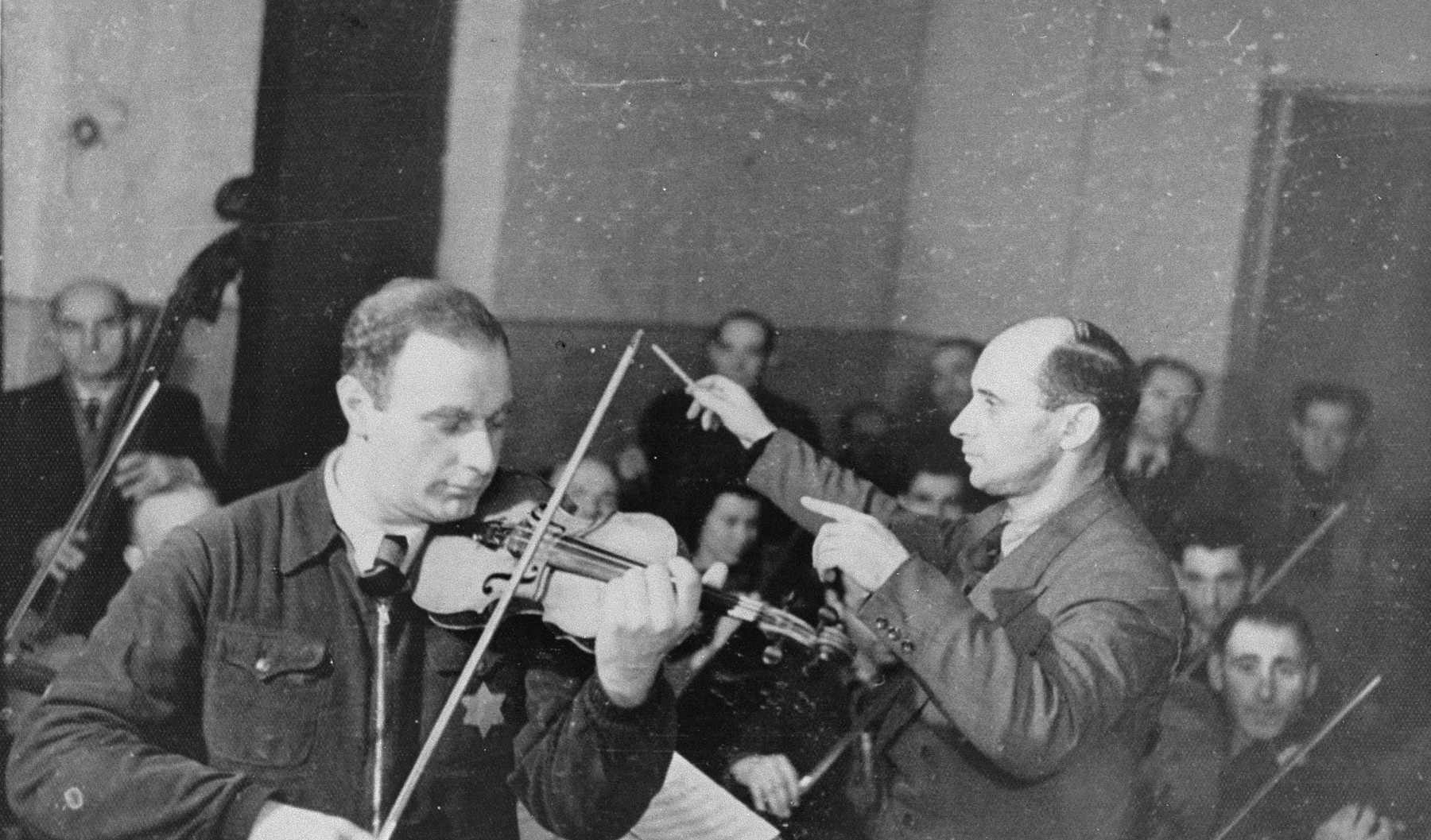 Pictured are Boris (Abraham, or Abrasha for short), Stupel, playing the violin and Michael Leo Hofmekler, conducting. Maya Gladshtein is seated behind in the center.

See https://www.ushmm.org/wlc/en/article.php?ModuleId=10005174.
See Also "Kauen Main Camp" in Encyclopedia of Camps and Ghettos Volume 1 Part A.
Biography
Robert Hofmekler (1905-1994) was the son of Motel and Bertha (Blinder) Hofmekler (spelled variously as Hofmekleris and Gofmekler). He grew up in a highly musical Jewish family in Vilna, where his father was a well-known cello player. Robert had three siblings: Zelda, Michael (b. 1898) and Leo (or M. Leo, b. 1900). In the fall of 1920 the family fled from Vilna to Kovno. Michael was a gifted violinist, who was decorated by the Lithuanian president in 1932 for his cultural achievement in propagating Lithuanian folk music in performances, recordings and transcription. Leo served as the conductor of the Lithuanian state opera in the 1930s. After the Soviets occupied Lithuania in 1940 he was appointed music director and conductor of the National Radio Orchestra in Vilna. Robert emigrated to the U.S. in the fall of 1938. Following the German occupation of Lithuania in the summer of 1941, Leo, his wife and two children were forced into the Vilna ghetto, where they all perished in 1942 or 1943. Motel and Bertha and Michael and Zelda were forced into the Kovno ghetto. Motel played in the ghetto orchestra. He and Bertha perished in the ghetto early in 1944. Zelda’s husband, David Kovarsky, was dragged from his home and shot by Lithuanian nationalists during the early days of the German occupation of Kovno. Zelda and her daughter perished in an underground malina (bunker) during the final liquidation of the ghetto. Michael served as the conductor of the ghetto orchestra. He was probably deported to Stutthof during the liquidation of the ghetto and then transferred to Dachau or one of its satellite camps. In late April 1945 he was evacuated and ultimately was liberated in the vicinity of Landsberg, Bavaria. Robert, who was drafted into the U.S. Army in January 1941 and served in Europe with the 9th Infantry and 10th Armored Division, found his brother at the St. Ottilien displaced persons hospital camp in June 1945.

The Stupels were a family of noted Lithuanian musicians. Dmitri (Meir) Stupel (b. 1860) served as the conductor of the Vilna Symphony, and his wife, Maria (Miriam) Antakolsky Stupel (b. 1870) was the daughter of a famous Jewish sculptor. They had three boys, Alexander (Sasha or Shmaya, b. 1900), Gregory (Grisha) and Boris (Abraham or Abrasha) and two girls, Mania and Sonia (b. 1906), most of whom trained in Germany and also became professional, well-regarded musicians. After the Polish re-occupation of Vilnius following World War I, the family moved to Kaunas. Alexander, the oldest son, was an excellent violinist and performed with the Kaunas Symphony. The second son Gregory was a pianist. He studied music in Leipzig, Germany, and married Esther Lan. Her father, a wealthy businessman was also director of the Jewish Theater in Kaunas. Gregory played in the Jewish Theater, which was run by his father-in-law Gabriel Lan. Boris also studied violin in Germany and married a German woman. At some point he returned to Kaunas and became imprisoned in the Kovno ghetto.

Of the large family only Boris survived. The mother Miriam perished in 1942 in Kaunas at the age of 70, and the father Dmitri Stupel perished in 1942 in Fort 9 at the age of 80. Mania died before the war, and Sonia Stupel Abramson, who also was a violinist, perished in the ghetto in 1943. Aleksander Stupel survived the ghetto but was deported to Dachau where he perished in 1944. Gregory fled to the Soviet interior with his wife and child on the heels of the German invasion. Gregory died on the Russian front in 1942. His wife Esther came back to Lithuania with her only son. Esther's parents, Gabriel and Chaya Lan, were killed in the Ninth Fort. Boris Stupel survived the ghetto and incarceration in the Dachau concentration camp. After liberation he reunited with his wife. They moved to Australia with their only son, Joe who became a musical director of one of the Melbourne Synagogues.