Eli Zborowski (left) rides through the streets of Zarki disguised as a woman. 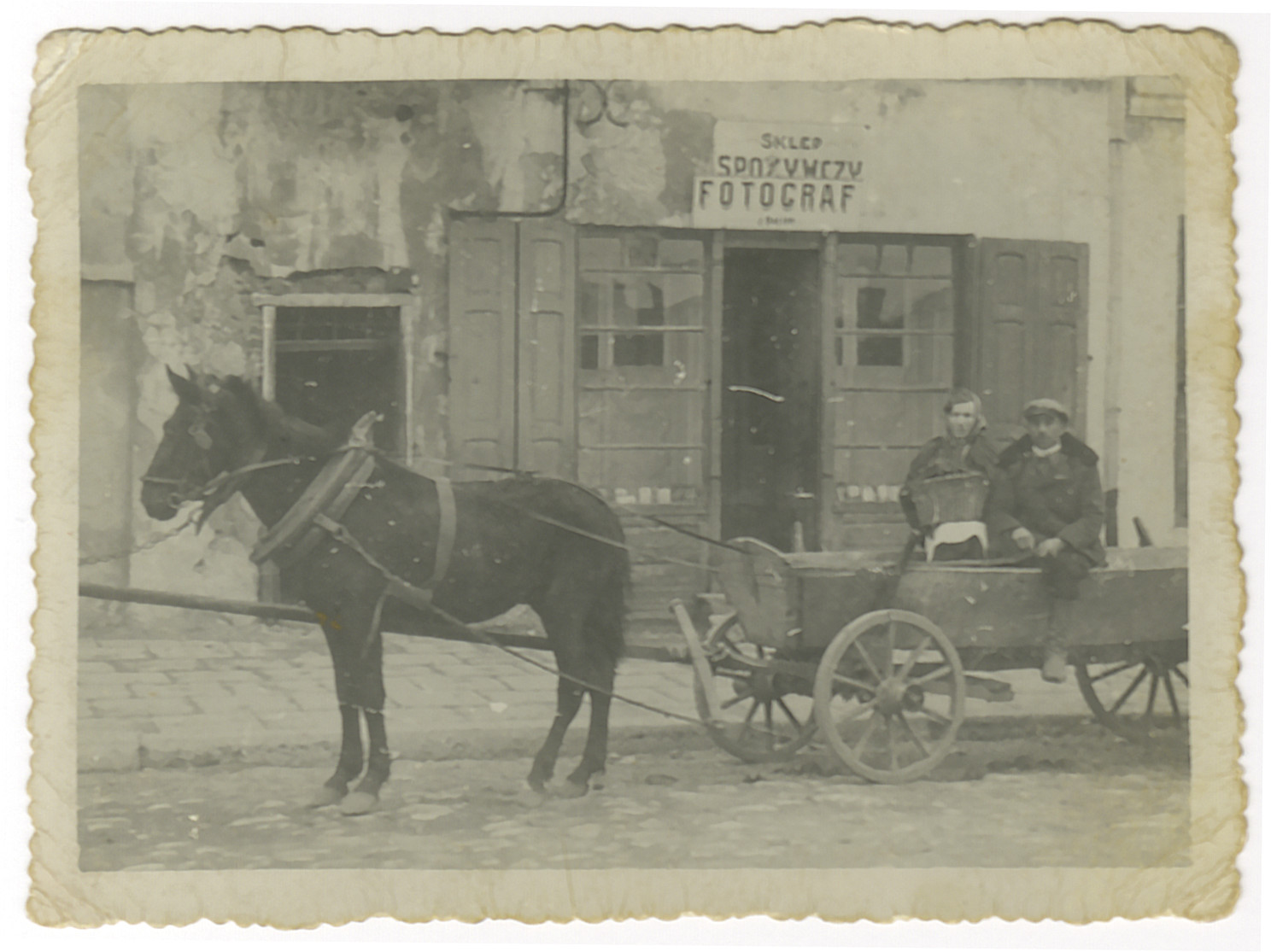 Eli Zborowski (left) rides through the streets of Zarki disguised as a woman.

He used this disguise regularly to sneak out of hiding and is pictured here alongside Jozef Kolacz, a farmer who helped hide him and his relatives.

Biography
Michael Bornstein (the father of the donor) is the son of Israel Bornstein and Sophie Jonisch Bornstein. Sophie was one of seven children born to Mordecai and Esther Jonisch in Zarki, Poland where her father owned a leather business. Michael was born on May 2, 1940 and had one brother Samuel, four years older. In September 1939 German troops occupied Zarki. They established an open ghetto there, and soon after Michael’s birth, the community’s elders selected Michael’s father to serve as the head of the Judenrat (Jewish Council). He used that position to collect money to bribe Nazis in the hope of bettering conditions in the ghetto. For the next year and a half, conditions in Zarki were better than in many nearby ghettos. However, as more Jews moved to town from surrounding areas rations became more meager and housing more crowded. The Nazis closed off the ghetto during the summer of 1942, and that October the Gestapo head announced he had orders to liquidate Zarki’s Jewish population. Only 30 men would be allowed to remain behind to clean up. Israel bargained the number up to 130 to include his wife, mother and two sons on the list. Sophie’s brothers fled and went into hiding, but her parents were deported. On August 5, 1943 Zarki’s remaining Jews were sent to the Radomsko ghetto and locked in the synagogue for three days. Afterwards they were loaded onto trucks and taken away. However, Schmidt, the Gestapo head, told Israel ant he, his wife and children would not be going on the trucks. Rather he was sending them separately to work in the ammunition factory in Pionki. For the first six months, conditions in Pionki were better than in Zarki. However conditions worsened by late spring and early summer, and in July the Bornsteins learned that the camp would be closed and everyone sent to Auschwitz. After their arrival, Michael’s father and brother were sent one way, and Michael remained with his mother and paternal grandmother, Dora Bornstein. Michael was just four years old. He was taken to a children’s bunk but after a week or two his mother visited him and brought him some bread. She visited several times before smuggling him into her bunk where he lay hidden. One day Sophie approached the fence separating the men and women and learned that her husband and older son had been killed. After some time, Sophie was transferred another camp to work on ammunition plant. Michael remained with his grandmother. On January 17, 1945 Michael woke up with a high fever, and his grandmother took him to the infirmary. This probably saved their lives since the following day, most of the remaining prisoners were evacuated from the camp and sent on a death march. When Soviet troops arrived a few days later, Michael was one of only 52 children under the age of 8 still alive. Michael and his grandmother Dora Bornstein returned to Zarki. After discovering that a Polish family lived in their old home and refused to let them in, they found shelter in an abandoned coop.

Though almost all of the Jews of Zarki perished, most of the Jonisch family survived and gradually returned to Zarki. Sophie’s parents, Mordechai and Esther Jonisch were killed: as were her brother Mordechai and sister Esther. However her siblings Moniek, Shlomo, David, and Hilda survived. Another sister Ola survived in Shanghai. The last member of the family to return to Zarki was Michael’s mother Sophie. Her siblings assumed she had been killed since she worked at an ammunition plant that had exploded. However, luckily she wasn’t there the day of the fire. After reuniting with Michael, she decided they should go to Czestochowa together with her youngest sister Hilda. They stayed there with David and Moniek who had reestablished a leather tanning business. After about six months they received a letter from Sophie’s oldest sister Ola who had immigrated to America. Hilda decided to join Ola by traveling to Cuba, and Sophie brought Michael to a DP camp in Munich. Dora felt she was too old to travel and decided to remain in Poland. In January 1951 Sophie and Michael immigrated to the United States on board the General Stewart. Michael went on to study pharmacy at Fordham University in the Bronx, where he earned his undergraduate degree and his PhD from the University of Iowa. There he met his future wife Judith Cohan.