Portrait of the Friedlander family. 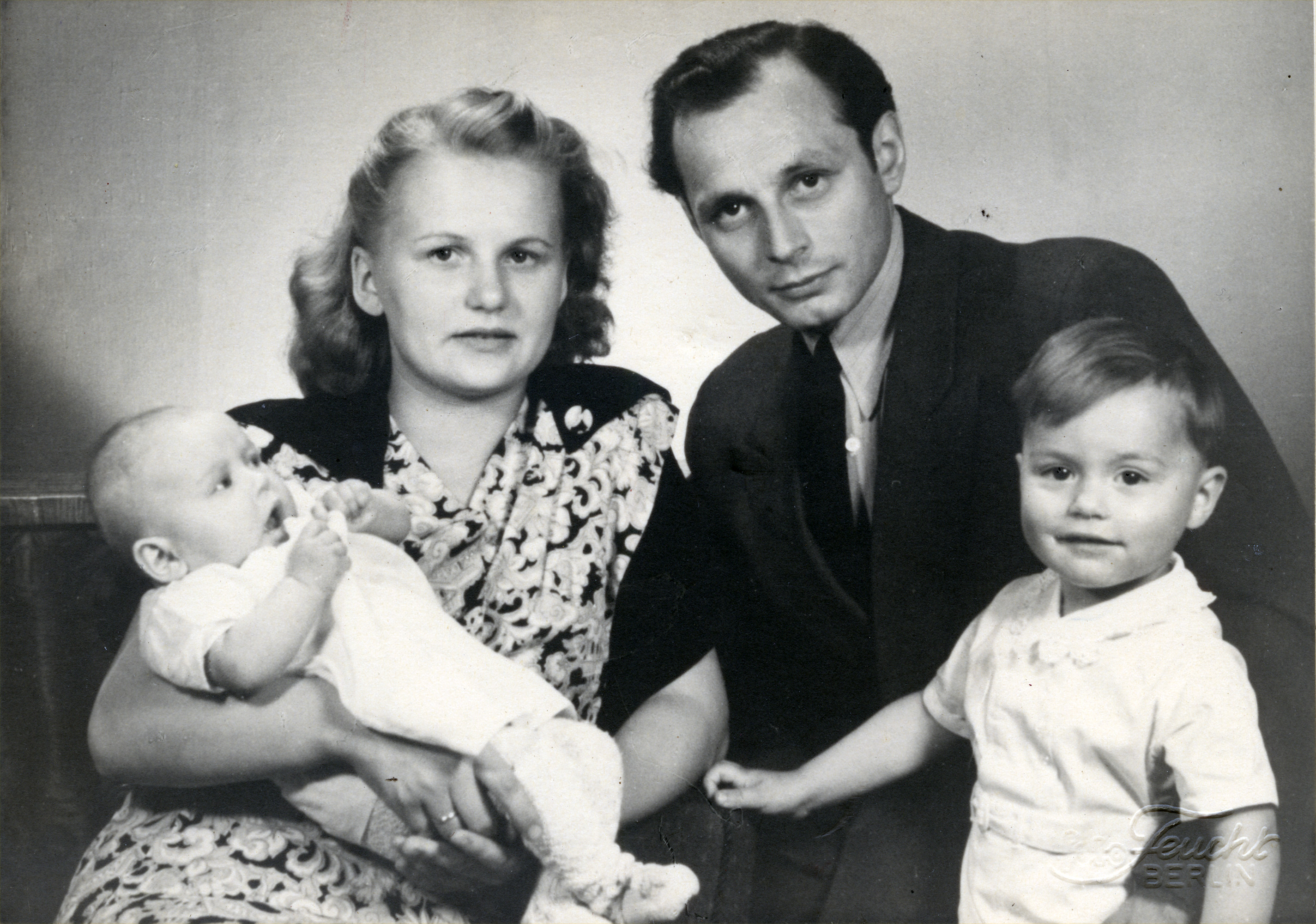 Portrait of the Friedlander family.

Pictured are Martin and Margot Friedlander, with their children Brigitta and Norbert. (right).

Biography
Martin Friedlander was born on January 20, 1920 in Posen, Germany to parents Bernhard (b. 1889 in Posen, d. 1971 in Berlin) and Maria (nee Lagocki, b. 1889 in Posen, d. 1952 in Berlin). Maria was Christian, but converted to Judaism when she married Bernhard. Martin had one brother, Conrad (b. 1914) and two sisters, Ruth (b. 1918) and Margot (b. December 1920). All of the children were born in Posen, where the family lived until 1926. At that time they moved to the Wilmersdorf area of Berlin, where Bernhard worked as a glass and crystal salesman in the Wertheim Store.

The family was not religious, though they did celebrate Jewish holidays. In 1933, Martin celebrated his Bar Mitvah in the Prenzlauer Berg synagogue. By 1935, he was no longer able to attend school due to growing restrictions on Jews. Bernhard no longer worked as a salesman, but instead in the textile business with his sister Ruth. Although his immediate family was apolitical, Bernhard’s brother Leo, a doctor, was a senator of the local Communist party. He escaped to the Soviet Union, where he was shot in 1937. Leo’s wife was imprisoned in the Kloyma gulag, where she perished.

In 1938, the family moved to Prenszlauer Berg. Ruth married Heinz Cohen, and their daughter Recha was born about 1938-39. Margot also married, and had a daughter, Ilona. With his father’s help, Martin found a position as an apprentice selling clothing. He was able to work at a clothing store on Budapestrasse until 1941, when he was fired and forced to wear a yellow star. He was sent to forced labor in nearby Henningsdorf to work on roads, and later to Siemens-Schukert, a German electrical engineering company in Lichtenberg.

As the war progressed, Martin’s family looked unsuccessfully for ways to leave Germany. Martin’s situation was particularly dangerous, as he had been distributing anti-Nazi leaflets on behalf of the resistance. On November 3, 1943 he was taken to the Gestapo on Burgstrasse, questioned, beaten, and tortured. On December 8, he was taken to a cell and held with other Jewish professionals, including a Dr. Landeschut, who tried to assist him. Martin later learned that Dr. Landeschut was shot in Sachsenhausen. On April 8, 1944, Martin was sent on a prisoner transport to Posen, then Warsaw, Krakow, and finally to Auschwitz, where he was imprisoned as a Communist, rather than as a Jew. He was tattooed with the number 179968 and sent to work with a group building railroad tracks outside Krakow. At some point, Martin was also sent to Laurahuette, a subcamp of Auschwitz. He was able to keep in limited contact with his family and learned that his father and brother had also been conscripted into forced labor, in Berlin. His mother remained at home.

In January 1945, as the Russian army was approaching, Martin and nearly a thousand other men were forced on a march from Auschwitz, then transported in open trains to Mauthausen. Not long after their arrival, Martin was transferred to Neuengamme, then to Gusen, and finally to Hanover. He worked with about 300 other prisoners at the Hanomag factory building trucks until April 6, when they were sent on a march to Belsen. By the time they arrived, the camp guards had left. Martin escaped from the group, running into the nearby forest toward the village of Iserhagen, and sustained a gunshot wound in his thigh. He managed to make his way to a farm, where a family hid and fed him for several days. After encounters with both the Russian and American armies, he was taken to a hospital for care and rehabilitation.

After the war, Martin returned to Berlin and found work, first in transportation and later as a salesman for an insurance company. In 1946, he married a German Christian, Margot, and they had two children, Norbert (Avraham) and Brigitta, both born in Berlin. Martin’s brother Conrad and sister Margot survived the war, but his sister, Ruth, her husband, and daughter were killed.