Collective passport from the Italian Consulate for the Venezia family, which allowed them to leave Greece for Palestine in 1944. 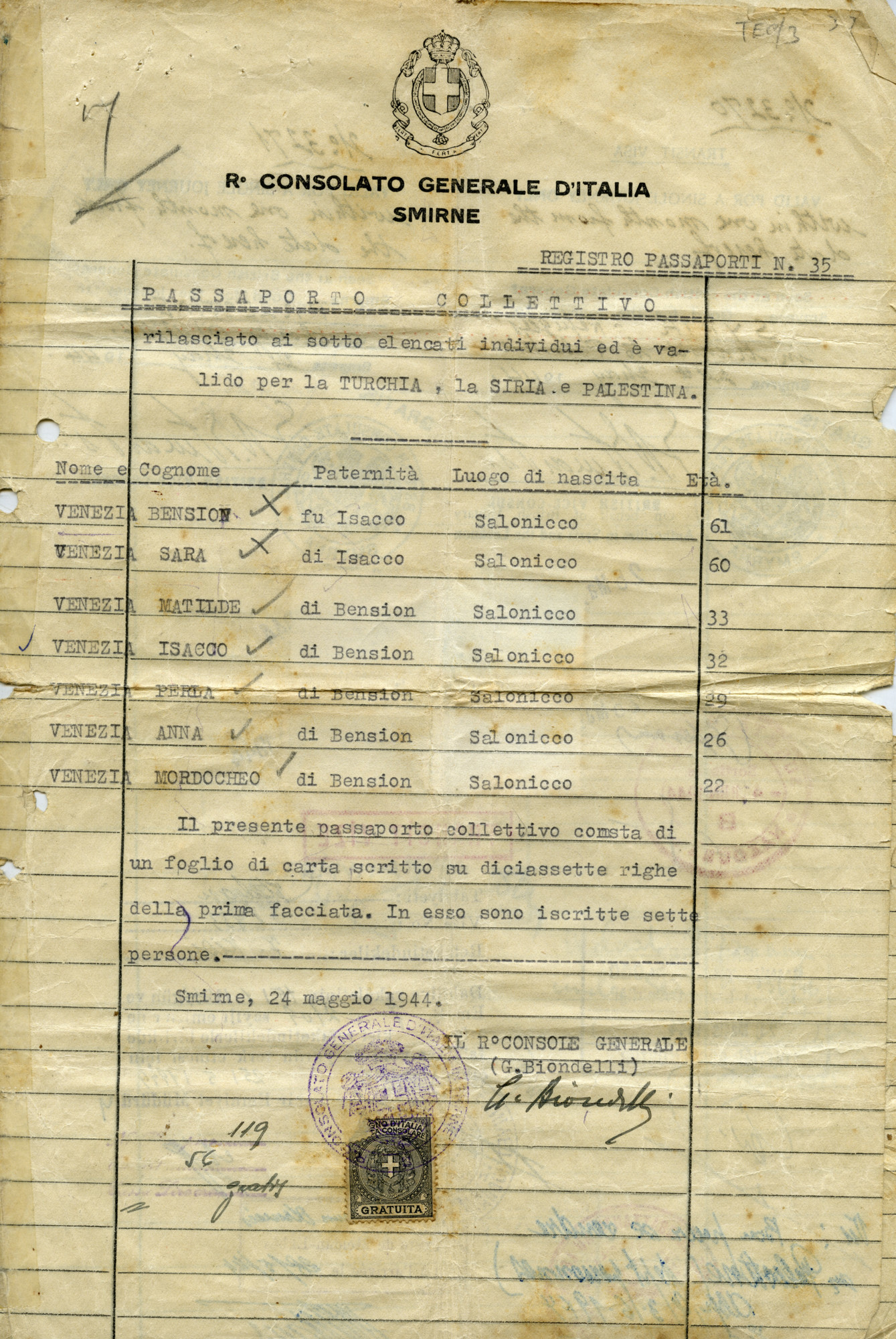 Collective passport from the Italian Consulate for the Venezia family, which allowed them to leave Greece for Palestine in 1944.

Listed on the passport are Bension and Sara Venezia, with the five children Mathilde, Isaaco, Perla, Anna , and Mordechai.

Biography
Perla Margarita (later Margalit) Venezia was born on November 29, 1915 in Salonika, Greece to parents Benzion (b. 1885) and Sara (nee Malach, b. 1884). Sara was the daughter of Isaac and Perla Mallah, and had a brother, Leon. Benzion was the son of a tax collector who lived in Venice, but who had moved his family to Salonika in the 1820s, retaining their Italian citizenship. Benzion worked in the Amar bank. Perla had four siblings, Mathilde (b. 1911), Isaaco (b. 1912), Anna (Chana, b. 1918), and Mordechai (b. 1922), all of whom studied in an Italian school in Salonika. Isaaco went on to study mathematics at a university in Italy, but returned to Salonika after a year to begin a business making boxes for jewelry and cosmetics.

In October 1940, Italian forces invaded Greece, but were pushed back into Bulgaria. Germany intervened in April 1941, and by June had conquered Greece and divided it into administrative units among Germany, Italy, and Bulgaria. The Venezia family believed that their Italian citizenship would protect them, but in July 1942, Jewish men of Salonika were ordered to assemble at Eleftherias Square, where they were held and forced to do exercises in the sun. Isaaco was among the men assembled that day, and became convinced that the family would need to leave. Benzion, Sara, and all five children fled to the village of Kalogrezza, near Athens, where they paid a family to allow them to live in their cellar for ten months. Food was scarce. When German searches intensified, the family found partisans who smuggled them over the mountains to hide in Crete. With the help of the Joint Distribution Committee, they were able to escape through Turkey, Syria, and Lebanon, finally arriving in Palestine in May 1944.