Survivors from Kalisz view a monument to individuals who were killed in the Holocaust. 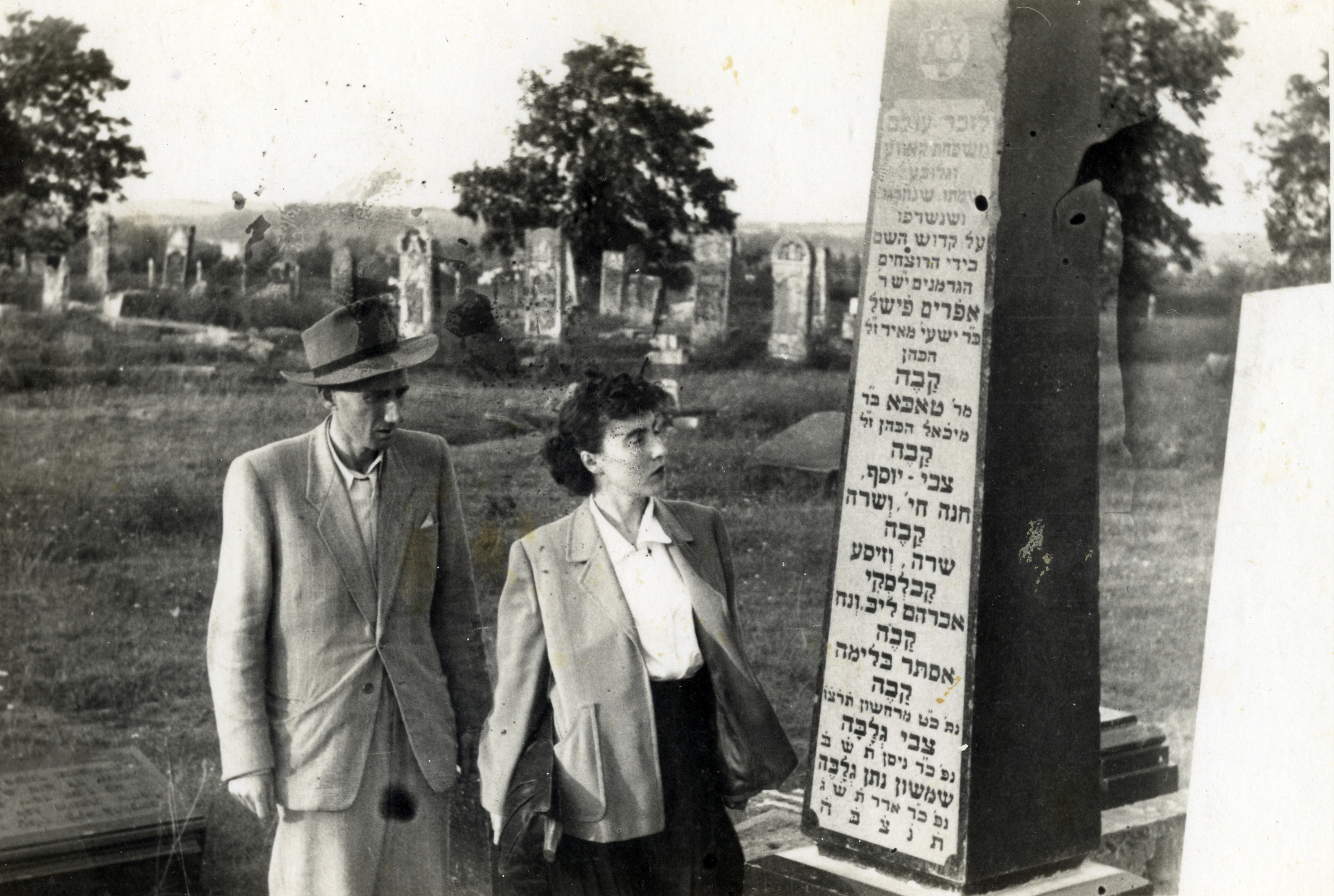 Survivors from Kalisz view a monument to individuals who were killed in the Holocaust.

Pictured are Ester (nee Gluba) and Jeszaayahu Kawe, prior to their immigration to Israel. The monument was created by Jeszaayahu.

After the war began, the immediate family escaped to Russia, leaving behind a large extended family. Among these family members was Ester’s cousin, Heniek (Chaim) Solnik (later Henryk Zielinski), who was an officer in the Polish army and a partisan. Henriek was instrumental in the survival of the Gluba family, as he sent them parcels of materials that could be sold on the black market in Russia.

At the beginning of 1940, Ester attended high school and her brother, Michael, went to primary school. After she reached the age of eighteen, her schooling ended and she had to work. By 1942 or 1943, she was the sole supporter of her family. Her fagther, Hersz, and her brother, Szamszon, had been sent to work in Siberia, and in 1943 they died from the harsh conditions and treatment. Ester, her mother, and Michael were sent to Uzbekistan. There was little food, and they were forced to place Michael in an orphanage to ensure his survival.

In 1942, Michael was scheduled to leave for resettlement in Iran with a group of some 1000 Jewish children and Anders Army recruits, as authorized by the Soviet authorities. Instead, he left the orphanage to return to his mother and sister. They managed to survive until the end of the war by continuing to sell items received in parcels from their cousin, Heniek.

After the war, the three returned to Kalisz. They were reunited with Heniek, who provided them with a place to live and basic needs. Michael joined a kibbutz, and later immigrated to Israel. Ester met and married Yeshayahu Kawe in 1947 and their son, Henryk Zvi, was born in 1948. In 1950, they immigrated to Israel.
Jeszaayahu (Szaja) Mejer Kawe (1918- ) was born to parents Efraim Fiszel Kawe (1886-) and Tauba Kovalski (1890-), and grew up in Kalisz, Poland, where his father had a tombstone business. He had five siblings, Ester Blima (1913-), Hersz Josef (1914-), Chana Chaja (1920-), Mojsze Lejbus (1922-), and Sura (1923-). He attended the Methivtha Yeshiva in Warsaw, studying to become a rabbi, but returned to Kalisz to assist his family financially.

In September 1939, Germany invaded Poland, and occupied Kalisz. Jeszaayahu tried to convince his family to leave with him for Vilna, where the Germans had not yet reached, but they believed that women and children would not be targeted, and the war would be short-lived. Jeszaayahu left on his own and established a tombstone business in Vilna. At first, he was able to maintain contact with his family, but soon they were deported to the Krakow Ghetto, and then transported to Plaszow. Jeszaayahu sent packages, but by the summer of 1940, he did not receive letters back from them. He remained in Vilna about a year, until the Germans entered the city in June 1941. He escaped to Russia and began to deal on the black market, but was eventually caught and sent to forced labor in Tashkent, Uzbekistan. He remained there for over three and a half years.

After the war ended he returned to Kalisz to find that he was the only member of his family to have survived. In Kalicz, he met and married Ester Gluba. Their son Henrik Zvi was born in 1948, and in 1950 they immigrated to Israel.