View of the cloister of Sankt (Saint) Ottilien which was lconverted to a German military hospital during the war and after the war as a displaced persons camp and hospital. 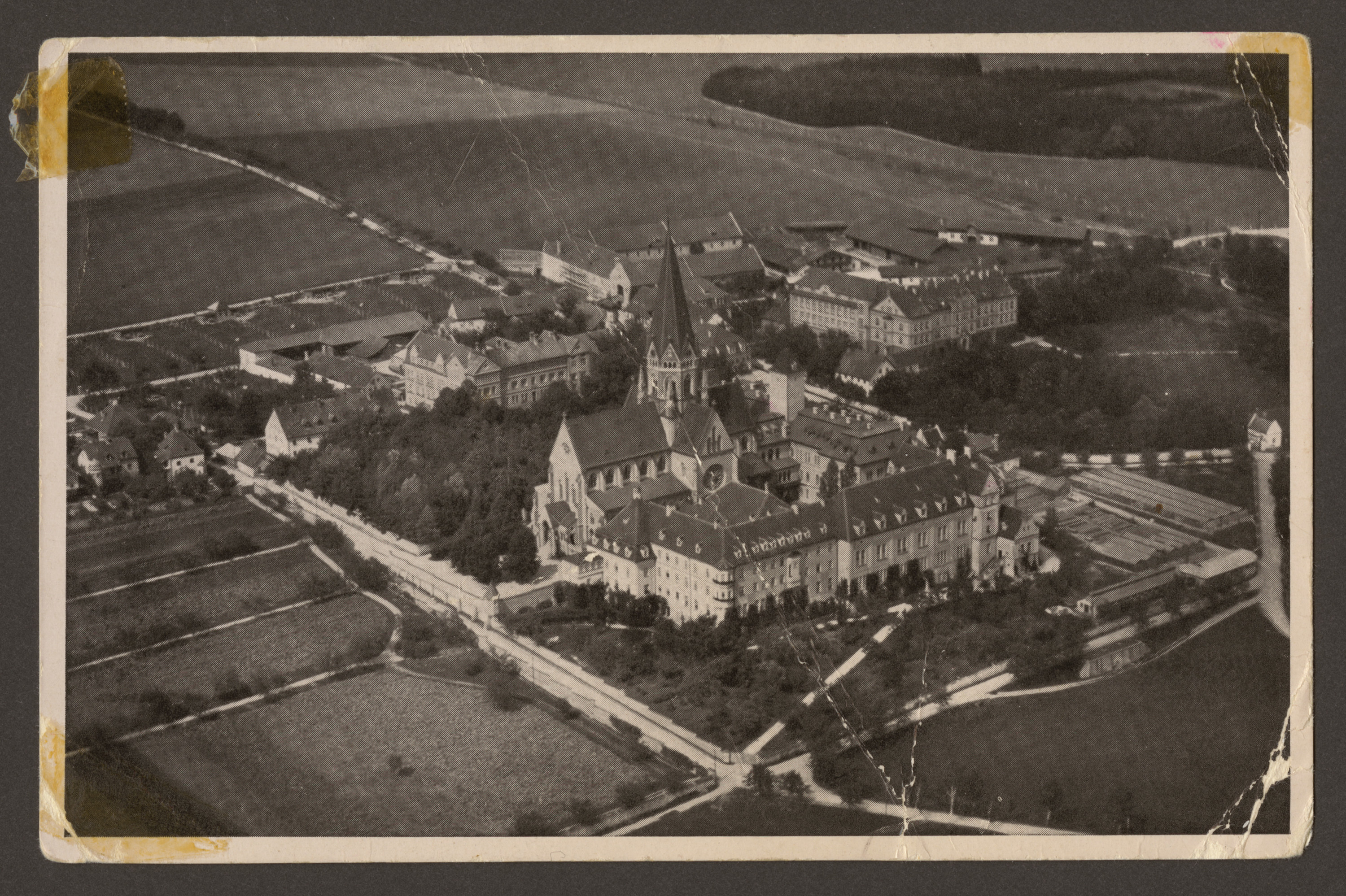 View of the cloister of Sankt (Saint) Ottilien which was lconverted to a German military hospital during the war and after the war as a displaced persons camp and hospital.

Biography
Abram Kirsztajn (Abraham Kirstein, b. July 23, 1908 and d. May 9, 2003) was the son of Zyndel and Shaina Sura Kirsztajn. He was the fourth of six children. Two boys died in childhood. The surviving children were Hindel Bluma (b. 1905, later Goldberg), Abram, Manya, Leah, and Chaim Lazar. Shaina Sura died in 1920 from a brain aneurysm. Zyndel remarried and had an additional six children with his second wife Chana, (Shaina Sura’s sister). The family was Orthodox and Chassidic. Like his father, Abram manufactured high end paper boxes. On September 4, 1930 Abram married Sura Gitla Leczycka. Her father was also a box maker. They had three boys: twins Chaim Jojna and Majer Fiszel (b. October 27, 1932) and Jakob (b. March 29, 1937). Following their invasion, the Germans established a ghetto in Lodz, renamed Litzmanstadt in February, 1940. The Kirsztajn home was already in the allocated neighborhood, but now had to share their apartment with two other families. The Germans confiscated Abram's box making machinery so he could no longer work independently. Instead he was sent to work in the ghetto’s paper factory. His two older boys also worked there. While in the ghetto, his father died from hunger. On September 7, 1942, Nazis ordered the round-up of all children in what was known as the Gehsperre Aktion. Abram’s three boys were taken from him even though the two older ones had working papers. They were brought to the ghetto hospital. Abram tried to visit his sons to bring them food and warm sweaters, but a German guard prevented him from entering. The children were then placed on trucks and taken to the Chelmno death camp where they were murdered. In August 1944, the Germans liquidated the ghetto. Abram and Sura Gitla were placed in cattle cars and taken to Auschwitz. There, they were separated. They never saw each other again. Sura Gitla was gassed immediately upon arrival. After a few weeks in Auschwitz, Abram, together with a group of other "able bodied men," was transferred to the Kaufering sub-camp of Dachau. There he worked digging trenches for cables and cutting trees in the forest. Abram contracted typhus and became quite ill. Shortly before liberation he was transferred to the main camp of Dachau where he was liberated by American troops on April 29, 1945. He weighed only 55 pounds.

US Army chaplain, Rabbi Abraham Klausner was send to Dachau. There he found the Jewish prisoners most in need of medical help, among them Abram Kirsztajn. He arranged for him to obtain better medical help and recuperation at St. Ottilien, an abbey before the War, but converted to a military hospital for the Germans, and now a DP Camp and hospital serving survivors. Some weeks later, while returning with a friend from an excursion to Munich, he met Manya Blacher and her sister and brother-in-law, Josef and Miriam Glasrot, on the train platform. The three traveled together back to Saint Ottilien. A courtship ensued and Abram and Manya married on January 14, 1946. A year later on April 13, 1947, their daughter Sara was born. In June 1949, the family immigrated to the United States on board the Marine Jumper, a former troop ship used to transport refugess to the States. They arrived on June 24 in New York city and later settled in the Boston area with the help of a cousin Samuel Poorvu. Before they emigrated, Abram changed the spelling of his name to Abraham Kirstein. On October 5, 1950, their son Jerome Samuel was born.


Manya (Michla) Blacher Katz (later Kirstein) was born on December 31, 1910 in Lithuania to Nechama Yentl and Yerucham Blacher. She had seven younger siblings: Reuven, Henoch, Yehoshua, Matisyahu, Miriam and the twins Shaina and Faiga. She was married to Yitzhak Katz and had a daughter Minna. In June 1941 Germany launched a surprise invasion of the Soviet Union and the Baltic States. Manya’s husband was immediately conscripted by the Russian army and was killed right after the action began. Her brother Yehoshua was murdered in the Slobodka Yeshiva massacre in June 1941 in Kaunas. Her daughter Minna died from medical complications and disease. Her parents and most of her siblings were murdered in the Semeliakes Ghetto massacre on October 6, 1941 by the Einzatzgruppen. Manya had escaped to the forest, and her sister Miriam and brother-in-law Josef Glasrot escaped to live among the partisans. After the massacres, Manya managed to get to the Soviet interior and Kazakhstan where she worked on a collective farm. Her brother-in-lawJosef eventually learned where she was and sent someone he trusted to get her. Manya did not want to leave, and finally Josef went himself. Armed with false identity papers for her, claiming she was his sister and two years older than she actually was, he got her out. They later te three of them made their way west first to Austria and then Germany where Manya met and married Abram Kirsztajn.