Raimond Zagron (right) and a friend walk down the street in Tunis. 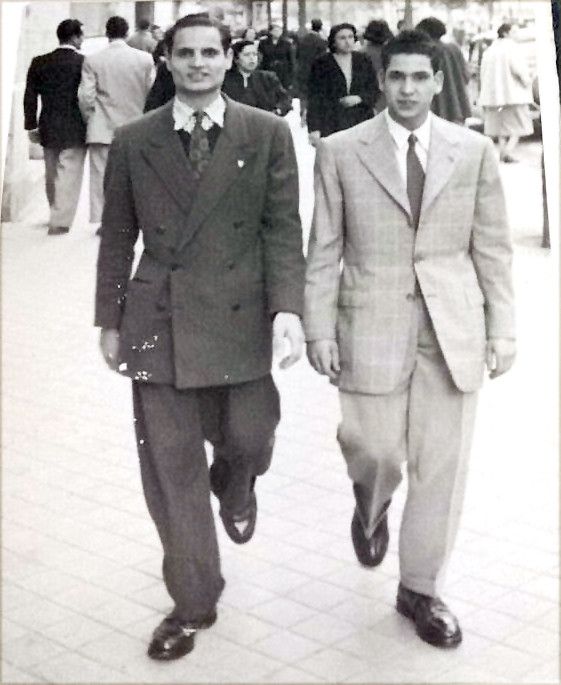 Raimond Zagron (right) and a friend walk down the street in Tunis.

Following the surrender of France to Germany in June 1940, the French Protectorate of Tunisia became part of Vichy France. On November 11, 1942 German soldiers invaded Tunisia. By early December, Moise Bourgel, head of the Jewish community and Haim Bellaish, chief Rabbi of Tunis set up a committee to draft Jews between the ages of 18 and 45 for forced labor, and over five thousand were sent. In the six-month period of the occupation (November 1942 to May 1943), many hardships were imposed on the Jewish population. They were forced to wear the Star of David, and severe punishment was meted out to anyone who disobeyed. Heavy taxes were levied and properties were confiscated. Nissim’s store was closed and he could no longer work, though clients still occasionally came to his house. Approximately one hundred sixty men from Tunisia were sent to extermination camps in Europe.

German officials set up headquarters in a villa located across the street from the Zagron family. Thirteen-year-old Raimond was required to report each day to perform various tasks, such as carrying heavy objects, washing cars and floors, and chopping wood to be used for heating. One of his legs was injured in a bombing, and would require later treatment by Allied doctors. Esther was also required to work for the Germans, and would cook for them several times each week. Victor was sent to the concentration camp of Bizerte. As a result of his incarceration, he died during Passover in 1945, at the age of 23.

After the occupation, life began to return to normal. Claudine began to attend a Koteb (a religious kindergarten). Asher immigrated to Israel in 1949 and went to Mikve Tisrael to study, eventually becoming a building engineer in the Misrad Hashikun in Tel Aviv. The rest of the Zagron family immigrated to Israel in 1956 onboard the Negba ship, sailing from Marseille and settling in Ramat Hasharon. Nissim continued to work as a tailor, while Raimond worked in a radiator factory in Jaffa. Upon her arrival in Israel, Claudine was given the name “Nava.” She studied at an ulpan (school for the intensive study of Hebrew) and was in Sherut Leumi (National Service) in Ashodod. In the following years, she worked as an assistant to social workers at the kibbutz Yavne, as a clerk in Tel Aviv, and for Israel Aircraft Industries. She married Amos Yardeni, and they went on to have three sons, a daughter, and twelve grandchildren. Nava continued her studies, earning a PhD from Bar Ilan University in Eretz Israel studies in 2009. She is the author of several books.