Group portrait of UNRAA staff and medical personnel at the Rothschild Hospital in Vienna. 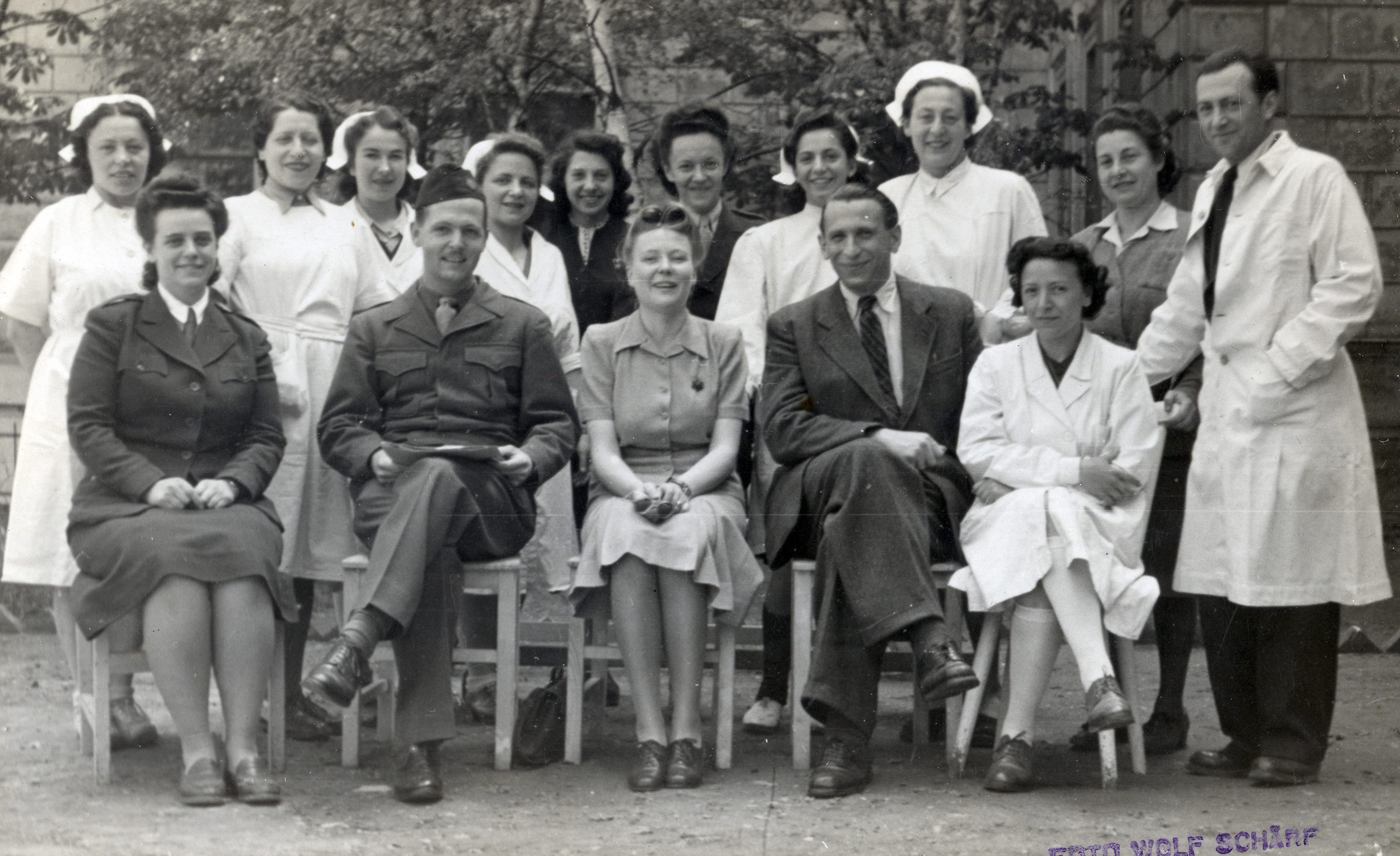 Group portrait of UNRAA staff and medical personnel at the Rothschild Hospital in Vienna.

Among those pictured is Dr. Georg Kollman (seated in front, second from the right).

Biography
Georg Kollman was born November 19,1912 in Vienna, Austria to parents Robert (b. October 29, 1877) and Friederike Much Kollman (b. April 22, 1882 in Czechslovakia). Robert was a fur merchant and Friederike a homemaker. Georg had one brother, Stefan (b. December 22, 1918 in Vienna). Georg studied medicine at the University of Vienna, graduating in 1937, and Stefan studied dentistry. In 1935, their father Robert died from pneumonia.

After the Anschluss in March 1938, Georg and Stefan began making plans to escape Austria. Before leaving, Georg married Janka Holczer (b. September 10, 1910 in Niyergyhaza), daughter of Ludwig and Regina Holczer. A friend obtained visas for them for Finland, but Georg's mother remained in in Vienna. They travelled first to Berlin, then to Stettin, Poland by train, and finally boarded a ship to Helsinki, arriving on July 29, 1938. As immigrants, they were required to register with the police. Although he had completed his medical degree, Georg was not allowed to practice medicine. In one account, he worked for a company named Malli Eita; in another he and Janka, who was a chemist, opened a shop that produced cosmetics. Their son Franz Olaf was born on May 23 (or May 15), 1941. Georg’s mother, who had remained in Vienna, was deported to Izbica, Poland in 1942, where she is presumed to have perished.

At some point Georg was arrested and placed in the Tammisaari prison in Dragsvik Ekenas, Finland. Not long after, Janka and Franz Olaf were sent there as well. After a few weeks, the three were sent from prison with a group of five others to Tallin, Estonia on the ship SS Hohenhorn, arriving November 10, 1942. From Tallin, they were sent to another prison called The Battery, where they remained for fifteen months. On February 7, 1943, they were sent by train back to Berlin, placed temporarily in the Judisches Sammellager in Gross Hamburgerstrasse, then deported to Auschwitz. They arrived February 19, 1943. Janka and Franz Olaf are believed to have been gassed on arrival. Georg was selected for work and forced to do very strenuous manual labor. In January 1945, as the Russian army approached, Georg was sent by foot and by cattlecar to Mauthausen, then to the subcamps of Melk and Ebensee.

In May 1945, prisoners at Ebensee heard gunshot in the distance and sensed that Allied forces were close by. Georg hid in a latrine, where he lost consciousness. On awakening, he found himself in the Ebensee hospital, where he remained, recuperating, until 1946. After he had recovered, he offered his services as a doctor to the field hospital set up by the U.S. Army, but they sent him to Vienna to obtain documents proving that he had completed his studies. On his return, he worked with refugees in cooperation with the UNRAA team. In 1947 he was called to Finland to testify against the Chief of Police, but then returned to work at the Rothschild hospital in the Vienna district until 1950, when the camp closed down.

After the closing of the camp, Georg immigrated to Israel, where he enlisted in the army medical corps. Upon his discharge, he found work in Ein Shemer, and immigration camp. There, he met Rivka Kreisel, a survivor from Romania. They were married on June 6, 1950, and their first child, Orna was born in 1956. Georg passed away in 1992.