Portrait of an unidentified Dutch family who provided a hiding place for Erna Stopper during the war. 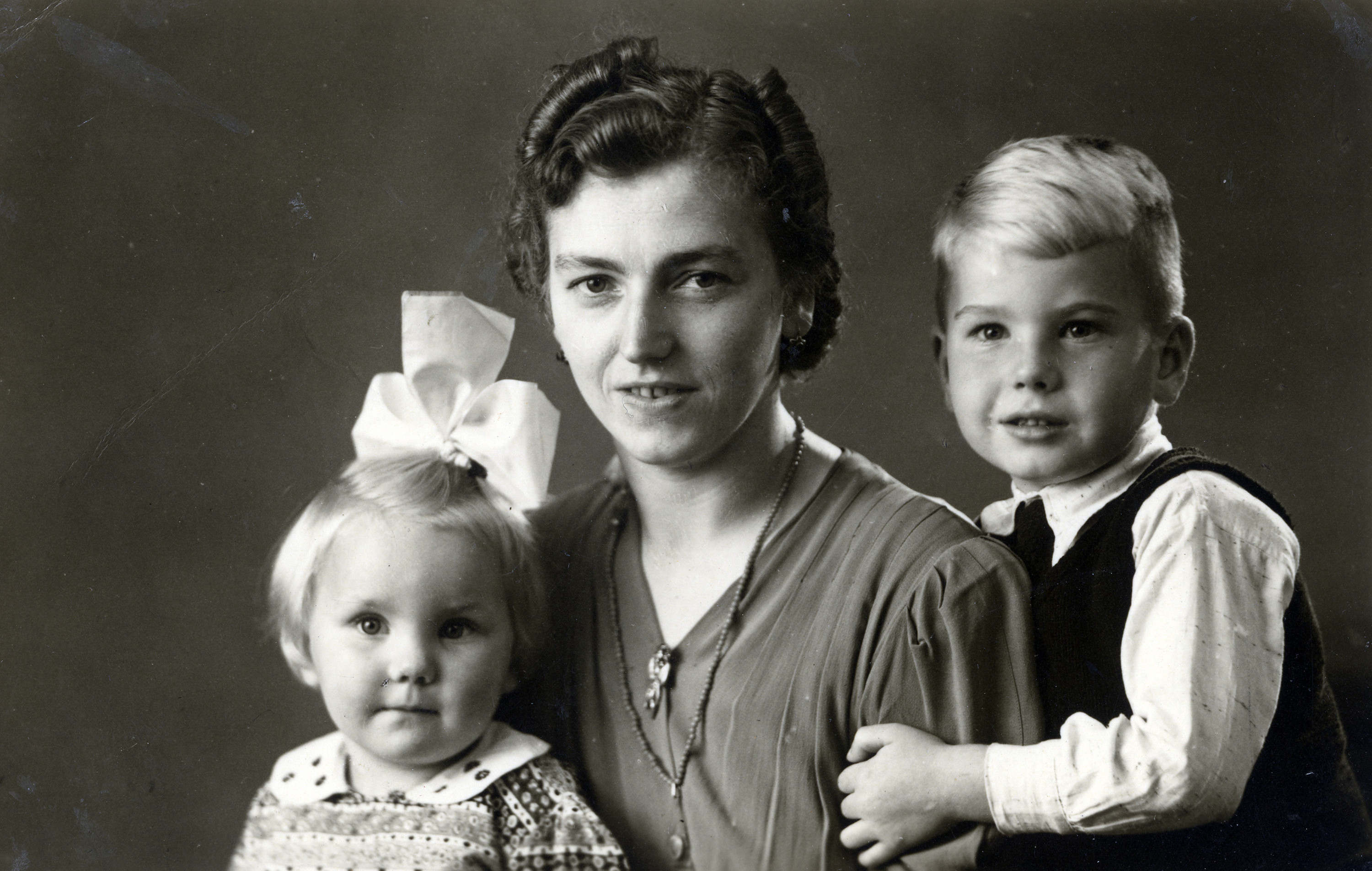 Portrait of an unidentified Dutch family who provided a hiding place for Erna Stopper during the war.

Biography
Erna Stopper (later Bindelglas) was born in Amsterdam on November 13, 1930 to parents Sophie Thaler Stopper (b. April 20, 1899 in Galicia, Poland) and Isaac (Itzhack) Stopper (b. April 11, 1899 in Solotvyno [Solovina], then in Poland). When Sophie was a teenager, her parents sent her to Leipzig, Germany to protect her from pogroms in their area. Isaac and two of his brothers were also sent by their family to Germany, in their case to avoid service in the Polish army. Both came from Orthodox families, and they met through a matchmaker. They were married in Leipzig in 1921, and moved shortly thereafter to Amsterdam. There, Isaac started a business selling men’s suits, and raincoats for both men and women. The couple had four children, Henny (b. May 25, 1923), Tilly (b. May 8, 1925), Erna, and Abraham (Abbie, b. February 20, 1935). They lived in an apartment above the store, and had a comfortable life. Erna went to public school in the mornings and Hebrew school in the afternoon, and studied piano.

In May 1940, German forces invaded the Netherlands. The Netherlands was forced to surrender, and was placed under German occupation. Antisemitic measures were soon instituted. Jews had to register at the municipality, wear the Star of David badge, and a "J" was stamped on their identification papers. Ghettos were created, and curfews imposed.

By the end of 1941, the family’s situation worsened. Some of their cousins managed to escape to Switzerland, but this required crossing the Alps on foot, so it would have been a difficult and expensive option for a family with four small children. They secured false identification papers in the hopes of leaving but they were not able to, so the family took measures to try to survive. Isaac converted all their cash to diamonds and buried them in three metal cigar boxes. Sophie packed the family’s treasured photographs, Shabbat candlesticks, and other items in a suitcase and gave them to a trusted non-Jewish neighbor. The family’s apartment above their store was already on a street designated as Jewish, so they did not need to move, but Isaac boarded up the store to make it appear that no one lived there.

Deportations of Jews from Amsterdam intensified in late 1942. Erna recalls hearing trucks with loudspeakers in the street, demanding that Jews remain in their homes and get their bags ready. Her family heard Germans knocking on the door of their store, but they hid and refused to come out. In the spring of 1943, the family decided to move to a new apartment in east Amsterdam, but within a few days, the same trucks with loudspeakers arrived. This time, Isaac and the younger children hid in the attic, while Sophie and Henny tried the ruse of telling the Germans that Sophie was having a miscarriage and could not leave. The Germans were unconvinced, and the entire family was taken to the train station, which was a staging area for deportations. Isaac instructed his family members to try to cover their Star of David badges, escape separately, and return to the house. Sophie and all the children succeeded in doing so, but the train arrived before Isaac was able to escape, and he was deported. They received a letter from him that was written on August 31, 1943 and sent from the deportation train, but they did not see him again. He was deported to Auschwitz, where he perished.

Sophie then had to devise a new plan to save the family. She had heard that the Germans were very afraid of contagious disease, so she invented a story that Erna had scarlet fever. They coated Erna’s throat with mustard to make it look inflamed, and obtained verification of her illness from a sympathetic doctor at the local health department. They put a sign up on their door and lived in quarantine for six weeks. Near the end of the quarantine period, they pretended that Erna’s older sister had also contracted the disease, but the Germans took the sister to the Jewish hospital via an ambulance and the rest of the family to a theater, which was serving as a holding area for deportations. Sophie immediately told the officials there that the entire family was contagious, so they were sent to the same hospital as the older sister.

The family was at the hospital just two days when they heard that it was to be raided, and they once again had to seek new lodging. In the hopes of finding hiding places for the family, Sophie had made contacts with the Dutch underground, who agreed to assist them. Tilly, Erna, and Abbie managed to escape through a small window in the basement of the hospital and meet up with these contacts but Sophie and Henny were caught and arrested.

Tilly, Erna, and Abbie were taken to separate hiding locations, and were not able to remain in contact with each other. Erna was taken by train to the town of Drente, and placed on the farm of Johanna Koeling, a widow with two teenage sons, Jan and Willem. She helped with the housework, and the family treated her well. She stayed there from September 27, 1943 to June 18, 1944. In June, two Dutch collaborators came to the house looking for a 12-year old Jewish girl who was said to be hiding in the area. The family quickly hid Erna in a small cabinet, and the two sons ran out the back. The sons had not been conscripted for military service earlier because their mother was a widow and needed help on the farm, but they knew that they could be sent at any time. Johanna denied that she was hiding anyone and attempted to placate the collaborators with food, but they said they would be back. They returned with additional reinforcements and guns, but Erna and the sons were hiding in a small hut in the woods, which had been constructed for this purpose.

After this incident, it was clear that it was no longer safe for Erna to stay with the Koeling family. From that point on, she was moved from place to place, for a total of thirteen moves. She lived with the Dekker family a few days, then stayed briefly at the homes of Jantje Katerberg, the Fleddrus family , the Donkerbrok family in Friesland, the Rozema family, and finally in home of Marie and Ger Vande Werff. She was liberated by Canadian forces.

After the war the family members began searching for each other, with the help of the Dutch underground. Erna learned that her brother, Abbie, had been in hiding with a family just an hour away from her last location. Her older sister Tillie had been discovered in hiding and was deported, so had spent the rest of the war in a series of camps, including Westerbork, Vught, and Auschwitz. She was released and sent to Sweden to recuperate just before the end of the war, as part of Swedish diplomat Folke Bernadotte’s negotiated release of some 30,000 prisoners in German concentration camps. Erna’s mother and sister Henny had been deported first to Westerbork and then to Bergen Belsen, where they remained until the end of the war. The family was reunited in Amsterdam, where they lived for the next several years. Sophie retrieved the suitcase of precious items back from her neighbor, and they managed to locate one of the boxes of diamonds that Isaac had buried years before. In 1949, Erna and one of her sisters immigrated to Israel, followed by the rest of the family in 1950. Erna married an American in 1959, and the couple moved to Phoenix, Arizona. They had four children. In 1993, she moved back to Israel.