Siblings Malka Hercberg and Maurice Tannenbaum walk down the street of Marseilles. 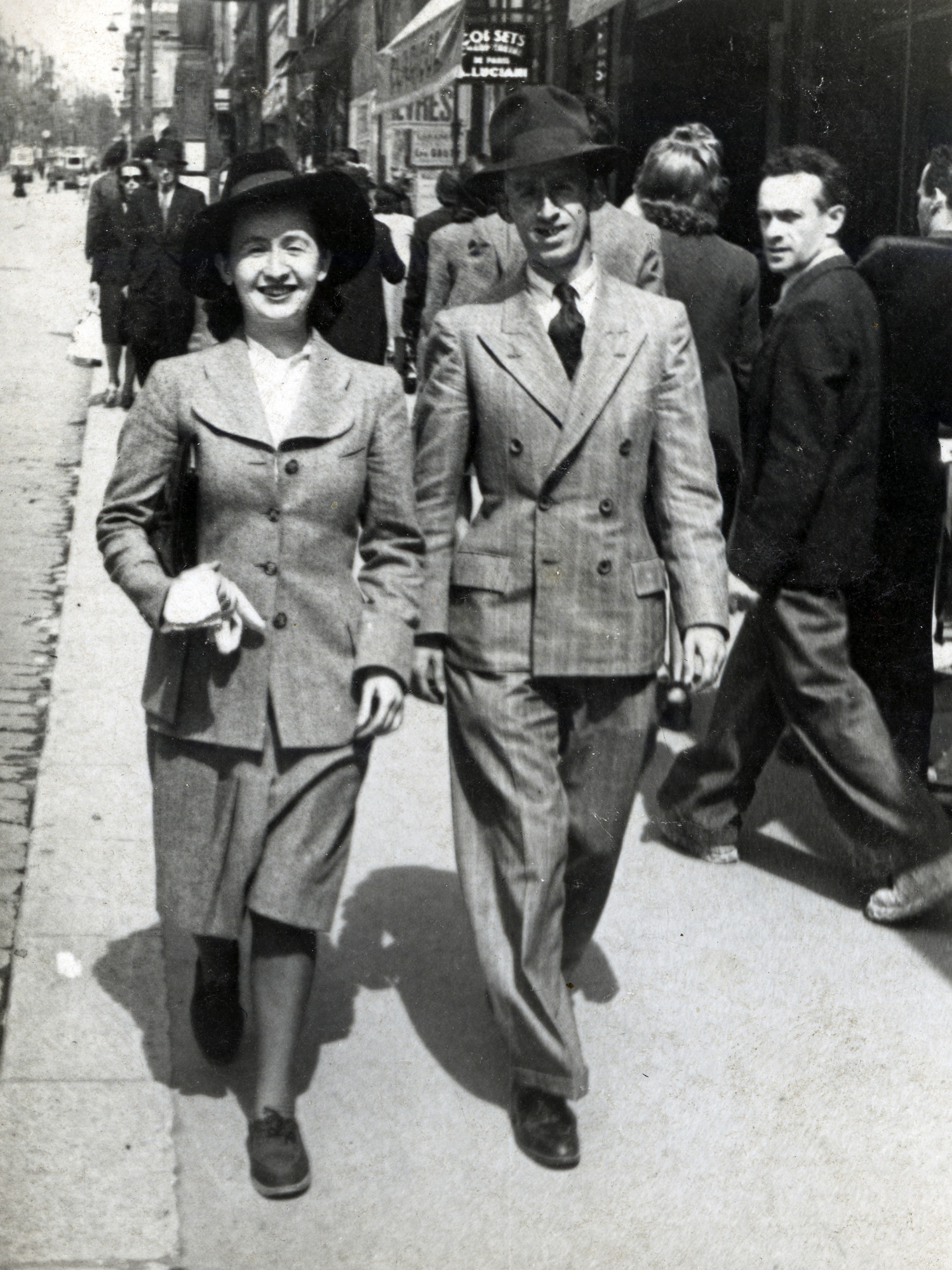 Siblings Malka Hercberg and Maurice Tannenbaum walk down the street of Marseilles.

Biography
Lazare Tannebaum was born in Metz, France on May 6, 1941 to parents George (Gershon) Tannenbaum (b. 1912) and Laja (nee Lejzerowicz) Tannenbaum (b. 1916). Laja’s parents were [mother’s name unknown] and Hirsch Zvi Lejzerowicz (b. 1872, Gur [Góra Kalwaria, Poland]). Both had been married previously, had three surviving children, and had lost their first spouse to tuberculosis. They married in 1911, and together had three more children, David, Laja, and Joseph. George’s parents were Lazar Tannenbaum (b. 1875) and Mirel "Pearl" (nee Zweibel) Tannenbaum (b. 1877). Both were born in Przeworsk, Galicia (then Poland). They were married in 1897 and had eight children, including George, Maurice, and Malka. The family settled in Metz, France in the 1920.

In 1936, George was drafted into the French Navy, where he served a year. He met Laja Lezjerowicz through a matchmaker, and they were married in August 1938. They opened a small store together that same year, but in August 1939 he was drafted once again and sent to Dunkirk, where he worked in a telecommunications unit that would coordinate the movement of Allied troops.

Anticipating the start of war, the Tannenbaum and Lejzerowicz families began looking for safer locations to live. On September 1st and 3rd, Lazare’s maternal uncle, Itzhok Lejzerowicz, moved fifteen families to Les Islette, a small town west of Metz, which had many vacant houses due to the closing of a glass-making factory there. From there, scouts fanned out to southwestern France, near Bordeaux, looking for safe places to settle. The Tannenbaum grandparents, their children, and grandchildren moved to Bordeaux. The Lejzerowicz grandparents moved to Angouleme, a town in an agricultural area in the southwest of France.

On May 10, 1940 Germany invaded France, Belgium, Luxembourg and the Netherlands. By May 18 Antwerp and Brussels fell to Germany and the Allies were forced to retreat to the coastline of France. The German army closed in, trapping more than 400,000 Allied troops near Dunkirk, where George was stationed. A lull in the fighting gave the British and French a few days to evacuate their forces across the English Channel, using all available British ships in an operation code-named Operation Dynamo. George was on board one of the last ships to leave Dunkirk.

After recuperating in England, he returned to France to find his wife and her family living in Angouleme. The couple moved to a small studio apartment on rue du Parlement St. Pierre in Bordeaux. By the fall of 1940, Laja was pregnant and they moved to a larger one-bedroom apartment, where they stayed until April 1941. In May, they moved back to Angouleme so that Laja could give birth to their first son, Lazare, in her mother’s home. In September of that year, they had to move once again, this time to an apartment on rue Alsace-Lorraine.

By the fall of 1941, the round up of Jews for transport to concentration camps had begun. To obtain false papers for his family, George went to the city of Nimes, located in the demarcation zone between occupied and free France. With the help of his brother-in-law and a friend from his Navy service, he secured papers for them under the names Georges Tanneur, Lea Legris, and Henri Legris. Laja and baby Lazare, who had remained Angouleme, planned to join George in Nimes once the paperwork came through, but found themselves delayed by unexpected events related to George’s brother.

George’s brother, Maurice Tannenbaum, had found a civilian job at the Port of Bordeaux, working as a clerk in the map department. While employed there, he was implicated as the person who had provided information that enabled the French resistance to scuttle French Navy ships requisitioned by the Germans. As Gestapo agents arrived at his office, asking for Maurice Tannenbaum, he managed to misdirect them and take the next train out of the city. He survived by escaping to the Pyrenees.

Two or three weeks later, when Laja attempted to cross the demarcation line with baby Lazare to join George, Gestapo officers asked if she knew Maurice Tannenbaum. She acknowledged that she did, but explained that she had not seen him for months. She was not allowed to cross, and in fact was sent back to Angouleme for interrogation by the Gestapo. Her father, learning of her situation, insisted that she cross that very night, and engaged a "passeur" (paid guide) to assist her. Carrying her baby, she made her way through several miles of fields, forests, and streams, finally arriving in Nimes to join George. They remained there until January 1943, when the German presence in southern France led to increased denunciations of Jews and deportations. George and Laja moved a fifth time, this time to the small town of Moirans (Isere), where George found work as a tailor. They registered with the police in order to obtain food rations, using their false papers. In March, a French policeman stopped George to check his papers, asking what his business was in Moirans, and trying to reassure him that he could safely acknowledge that he was Jewish. Alarmed by this interaction, the family moved again that evening, to the town of Grenoble at the foot of the French Alps, where they found lodging on a street across from a military depot.

Not long after the family’s arrival in Grenoble, aerial bombardments of military installations in the town began. They decided to move again, and were scheduled to move in several days, on a Sunday. On Friday, Laja awoke to a dream of her father warning her to move that very day. That night, their building was among those bombed, causing several casualties.

In September 1943, the family moved to a suburb of Grenoble called Croix-Rouge, where they stayed until March 1944. That spring, they decided to try to enter Switzerland with several other families. They travelled to Annemasse on May 1, and waited at a farm outside of town for a member of the resistance who would guide them. On May 3, they crossed a barbed wire fence into the safety of Switzerland, registering on May 4 as refugees fleeing Nazi persecution. Lazare was then three years old.

In August 1944, Paris was liberated, and Germany surrendered to the Allied forces the following May. After many additional moves and separations, George, Laja, and Lazare were able to move to Lyons to join two of George’s brothers. In the summer of 1945, they returned to Metz, where Lazare grew up and completed high school. He served in the Israeli army from 1959 to 1962, and then immigrated to the United States in August 1963. He graduated from Brooklyn College and from CSIS at Johns Hopkins. He has two children and seven grandchildren.