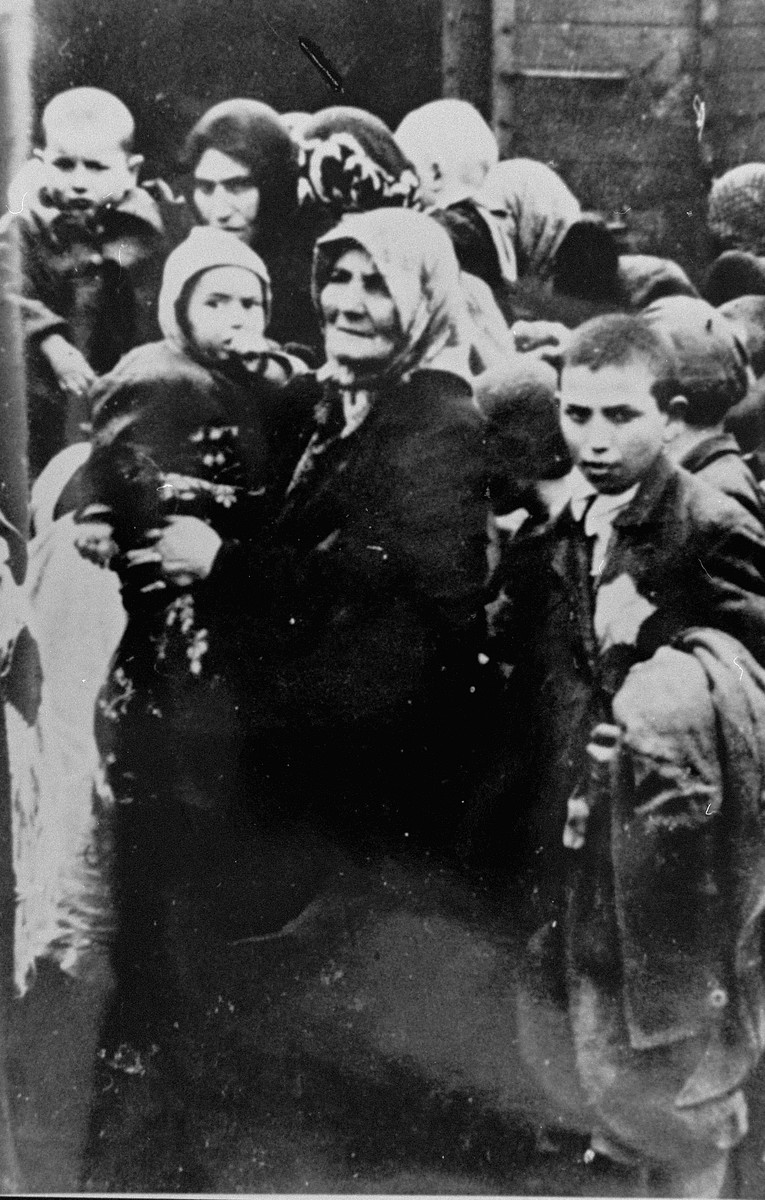 Pictured at the left is Rosa Goldenzeil holding her grandson Dani Jakubovitch. On the right is Armin Riter who had accompanied his mother and sisters to the women's side before rejoining his brothers and father on the men's side.

[Sources: www.yadvashem.org/exhibitions/album_auschwitz (2000); Swiebocka, Teresa, Auschwitz A History in Photographs. The Auschwitz-Birkenau State Museum, 1993]
Biography
Cecilie Klein-Pollack (born Cecilie Goldenzeil) is the daughter of Rosa and David Goldenzeil. Cecilie was born on April 13, 1925 in Jasina in Transcarpathia, Czechoslovakia. The youngest of six children, she had two brothers, Menachem and Chaim, and three sisters, Perla, Feige and Mina. Her father, a religious Jew born in Poland, taught private lessons in math and German, and her parents also owned a small grocery store. When Cecilie was only nine years old, her father David died following an extended illness. Soon her older siblings began to leave home. Since the town's school only went up to 8th grade, Cecilie's older siblings went to Prague to continue their education. After Hungary annexed Transcarpathia in 1939, Menachem, a law student and secretary of the Zionist Federation and managed to secure Palestine visas for himself and Perla. Chaim, a dental student, also obtained a certificate, but he did not want to abandon his mother and younger sisters and decided to remain in Czechoslovakia. One day Cecilie returned from school to discover that the Hungarian police had arrested her mother and Mina since they considered them illegal aliens on account of David's Polish birth. Cecilie, who was only fourteen years old, spent the night alone and then went to live with her married sister Feige. After six months, her mother and Mina were released on condition that they leave the country or face rearrest and deportation. Instead, Chaim, who had established a dental office in Horinc and was on friendly terms with his local police, brought his mother and younger sisters to Horinc. The three women hid in back of his dental office for about a year. Mina, meanwhile, decided to marry her fiancé earlier than planned in order to get valid citizenship papers and went with him to Chust. Soon afterwards, Chaim was ordered to report for forced labor. Without him, Cecilie and Rosa could no longer remain in Horinc. Before he left, Chaim arranged for Rosa and Cecilie to go to Nyiregyhaza where Cecilie could work for a business acquaintance as a dental apprentice. Chaim, who had given up his opportunity to go to Palestine so that he could help his mother and sisters, never returned. He was burned alive in a hospital after becoming ill in a labor camp in Poland. Though Cecilie worked as dental technician, their money ran out, and Rosa had to eat many of her meals in soup kitchens. One day Mina visited them and reported that Feige and her husband had been arrested. Feigi was sent to prison in Budapest and her husband had been sent to a labor camp. Their three young children were left behind in the care of a cousin. Rosa decided to go with Mina back to Chust and send Cecilie to Budapest to try to help her older sister. When Cecilie arrived in Budapest she learned that Feige had been transferred to Backa Topola in Serbia. Cecilie followed her there and met some friendly peasants who assisted her in several ways. Cecilie was able to visit her sister and deliver a food package. She also found a lawyer who was so impressed with her bravery that even though she had no money with which to pay him, he agreed to help and actually succeeded in freeing Feige. Cecilie returned to Budapest where she found a place to live and various jobs. One day she was arrested on suspicion of being Polish. Cecilie managed to talk her way out. After her release, Cecilie immediately found a new place to live so that she would not be picked up again soon. While in Budapest, Cecile met and became engaged to Joseph Klein. In March 1944 the Nazis entered Budapest, and Cecilie and Joseph decided to return home. They went first-class so that no one would suspect they are Jewish and jumped off train before they reached the station so they would not have to present official papers. Joseph went to his family, and Cecilie reunited with her mother and sister, brother-in-law and baby nephew, Dani. About a week later they were ordered into a ghetto, held in a brick factory, and strip-searched to await deportation. Feige and her three children were deported separately from Jasina. When they entered the train, Rosa was holding the bottle of milk for her grandson. A soldier grabbed the bottle, and when she asked if she could have it back, he began beating her with a riding crop. Cecilie began to scream, and the guard turned and began beating her instead. When they arrived in Auschwitz, Mina's husband gave his watch to a member of a Sonderkommando in exchange for information. He was told that they should give any young children to someone elderly. Rosa overheard, understood the implications and immediately took the baby from her daughter. Rosa and Dani were sent directly to the gas chambers, and Mina and Cecilie were selected for slave labor. Mina was very despondent over loss of her child and would have committed suicide were it not for her sister. When a sympathetic Jewish Kapo discovered that Cecilie wrote poetry, she moved the two sisters into the children's block (Block 8) where conditions were somewhat better even though they were over-age. Shortly before evacuation of Auschwitz, Cecilie and Mina were sent by cattle car to Nuremberg. Cecilie was very ill with fever and sores. Mina cared for her, and in the process recovered her will to live. They later were transferred to Holleischen where the Soviet army liberated them in the spring of 1945. After liberation, they traveled to Prague to recuperate and had planned to proceed on to Budapest. However, while she was in Prague, Cecilie met an acquaintance who told her that her fiancé, Joseph, had survived. She also learned of the whereabouts of her siblings in Palestine. Cecilie reunited with Joseph in Czechoslovakia. They were married in Budapest on August 21, 1945 and immigrated to the United States in 1948.