Group portrait of members of the Jewish partisan unit commanded by Yehiel Grynszpan in the Parczew Forest. 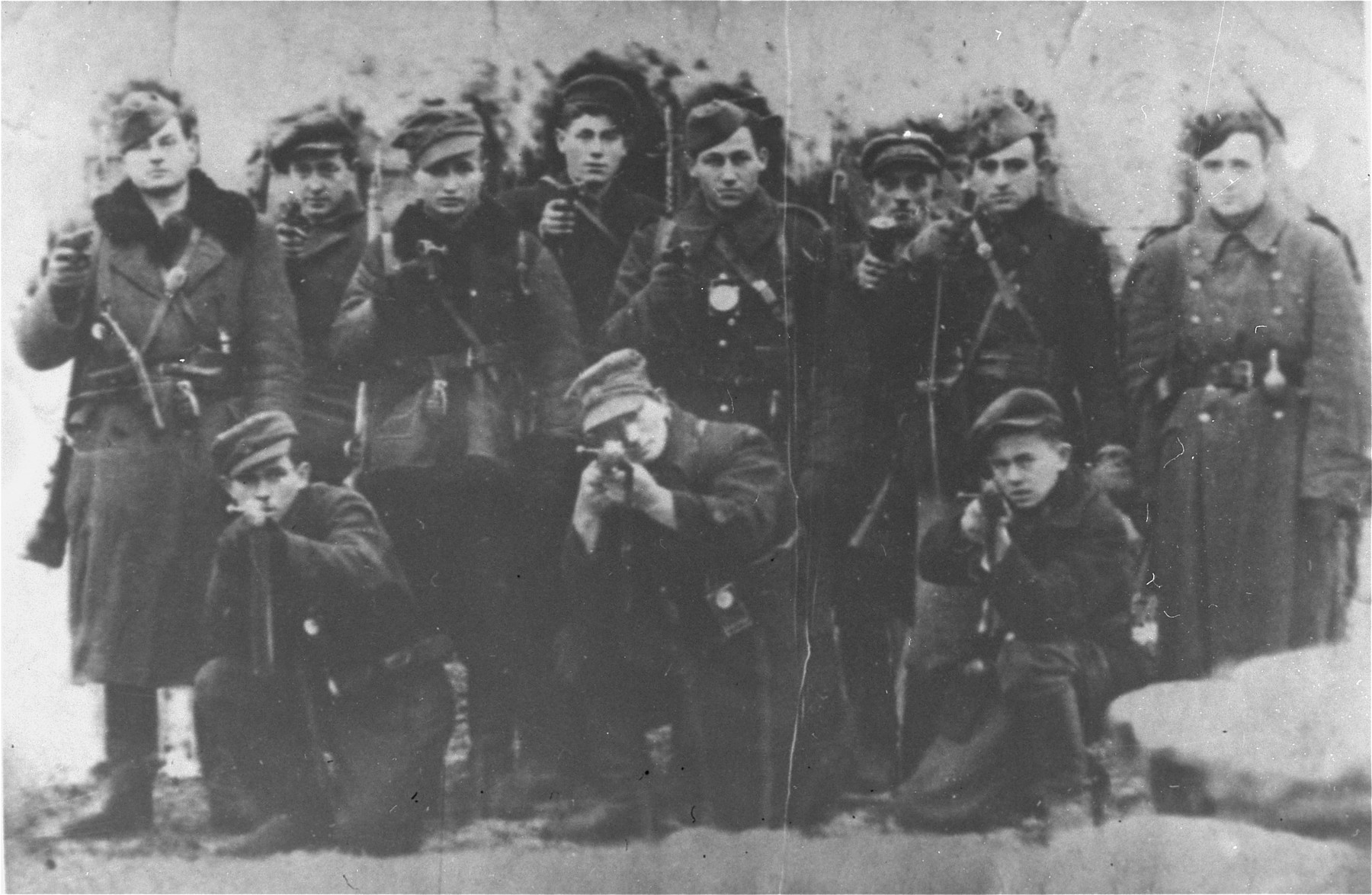 Group portrait of members of the Jewish partisan unit commanded by Yehiel Grynszpan in the Parczew Forest.

Lova Sitzmann was born in Parczew in 1926, and immigrated to Israel after the war.

Event History
The Grynszpan group was among the most notable of the twenty-seven Jewish partisan units that operated in the eastern territories between 1942 and 1944. Its members were recruited from groups of Jews in the northeastern part of the Lublin district who had escaped deportation actions to Sobibor in the summer and fall of 1942. The Grynszpan unit functioned as the protective force of the Jewish family camps that had been set up in the Parczew Forest. Weakened by a series of German anti-partisan actions in the winter and early spring of 1943, the unit was given help by the Polish communist Armia Ludowa, which it later joined officially. For the next year the Jewish unit participated in attacks upon German police positions and army lines of communication until the area was liberated in July 1944.

The People's Army (Armia Ludowa, known as the People's Guard, or Gwardia Ludowa, before January 1944). was one of the two main military organizations of the Polish underground that operated in German-occupied Poland. The other major organization was the Polish Home Army (AK or Armia Krajowa). The People's Guard was formed in January 1942 by the Polish Worker's Party (PPR or Polska Partia Robotnicza) and functioned in the General Government and the areas annexed to the Reich. After the formation of the communist-sponsored Polish National Council in January 1944, the People's Guard became the People's Army under the command of General Michal Zymierski (known as Rola). By the summer of 1944 the People's Army had some 34,000 members. In 1943 and 1944 units of the army carried out thousands of military and sabotage actions, many of them attacks on German transport and communications facilities. Several units of Jewish partisans eventually joined the ranks of the People's Army, including Yehiel Grynszpan's partisan band in the Parczew Forest. The People's Guard provided a small quantity of arms to Jewish fighters during the Warsaw ghetto uprising and undertook some holding operations outside the ghetto walls. In July 1944 the People's Army merged with the new Polish communist Berling Army that had formed in the Soviet Union under the command of General Zygmunt Berling. The Berling Army became the Polish army of the new Soviet-dominated Polish government after the German defeat.

https://www.ushmm.org/wlc/en/article.php?ModuleId=10005441.
Biography
Samuel Gruber was born January 3, 1913 in Podhajce, Poland. He joined the Polish Army in 1932. In 1939 he was drafted. Eight days later he was captured and was imprisoned as a POW in Stalag 13A in Germany. He was later transferred to other prison camps. In 1941 he was taken with other Jewish POWs to Poland. Imprisoned in Majdanek, he escaped with 22 others in 1942. He joined up with the partisans, and later became second in command of the Grynszpan group. He fought with this partisan unit until liberation in 1944. After the war Gruber lived in Lublin and Wroclaw. He emigrated to the United States in 1949.