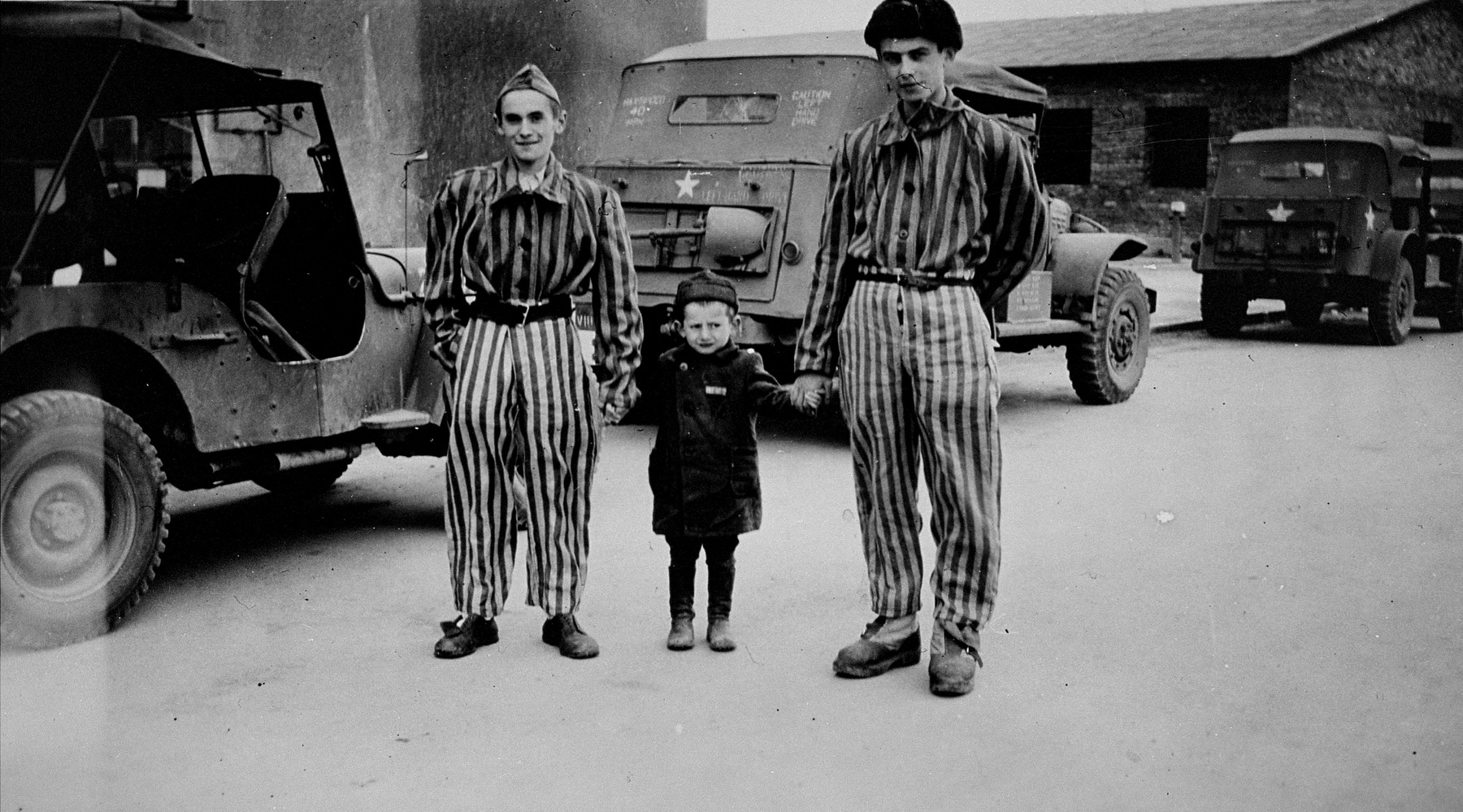 The original caption reads "The little boy, was four years old, had been in Buchenwald 3 years -- a political prisoner."

Biography
Joseph Schleifstein (born Josef Janek Szlajfaztajn) is the son of Izrael and Esther Schleifstein. He was born on March 7, 1941 in Sandomierz, Poland during the German occupation. The family remained in Sandomierz through its existence as a ghetto, from June 1942 through January 1943. After the liquidation of the ghetto the family was moved to Czestochowa, where Israel and Esther were presumably put to work in one of the HASAG factory camps. During this period Joseph was placed in hiding in the area. Israel was sent to work for the Letzium Work Camp in the Radom District working for a firm called Ralnik from October 1942 till September 1943. He worked in Makashin, near Sandomierz, from September till December 1943; in a HASAG ammunition factory in Kielc from December 1943 to approximately November 1944; and for a short time in Czestochowa. In January 1945, when the HASAG camps were closed and their operations transferred to Germany, the Schleifsteins were deported to Germany. Esther was sent to the Bergen-Belsen concentration camp. Izrael and Josef were taken to Buchenwald and arrived on January 20, 1945. Izrael successfully passed the selection process by concealing Josef in a large sack in which he carried his leather-working tools. The child could not remain concealed for long in the camp, but his life was spared, in part because the Germans valued Israel's craftsmanship and in part because they took a liking to the child. The SS guards came to treat Joseph as a camp mascot, and even had him appear at roll calls wearing a child-sized striped uniform. Despite this special treatment, Joseph remembers being lined-up for execution at one point and his father intervening at the last moment to save him. He also remembers being very sick during his imprisonment and living in a hospital for a time. Soon after their liberation in Buchenwald, Israel and Josef were taken to Switzerland for medical treatment. Some months later they were reunited with Esther in Dachau, where they lived until emigrating to the U.S. in 1947.
Aaron Rubinstein is the son of Benjamin and Chaja Rubinstein. He was born in Sokolow Podlaski, Poland on February 28, 1928. Aaron had four siblings: Rivka, Lea, Shlomo and Joseph. In 1935 his family moved to Ostrow Mazowiecka, where they lived until the outbreak of World War II. About one month later, the Rubinstein family fled to the Soviet-occupied sector of Poland. In 1941 they were all deported to Siberia. A year later the Rubinsteins succeeded in placing Aaron with a group of one thousand Jewish children, who were being taken from the Soviet Union to Teheran in the company of a unit of Polish soldiers and other refugees. After they reached Iran, the British government granted the children immigration permits for Palestine. The "Teheran Children," as they came to be known, traveled via Karachi and Suez, finally arriving in Palestine on February 18, 1943. Aaron's parents survived the war in the Soviet interior and returned to Poland. After living for a time in Lodz and Ostrow Mazowiecka, they immigrated to Israel in 1949.