Eugenius Kamer holds a name card intended to help any of his surviving family members locate him at the Kloster Indersdorf DP camp. This photograph was published in newspapers to facilitate reuniting the family. 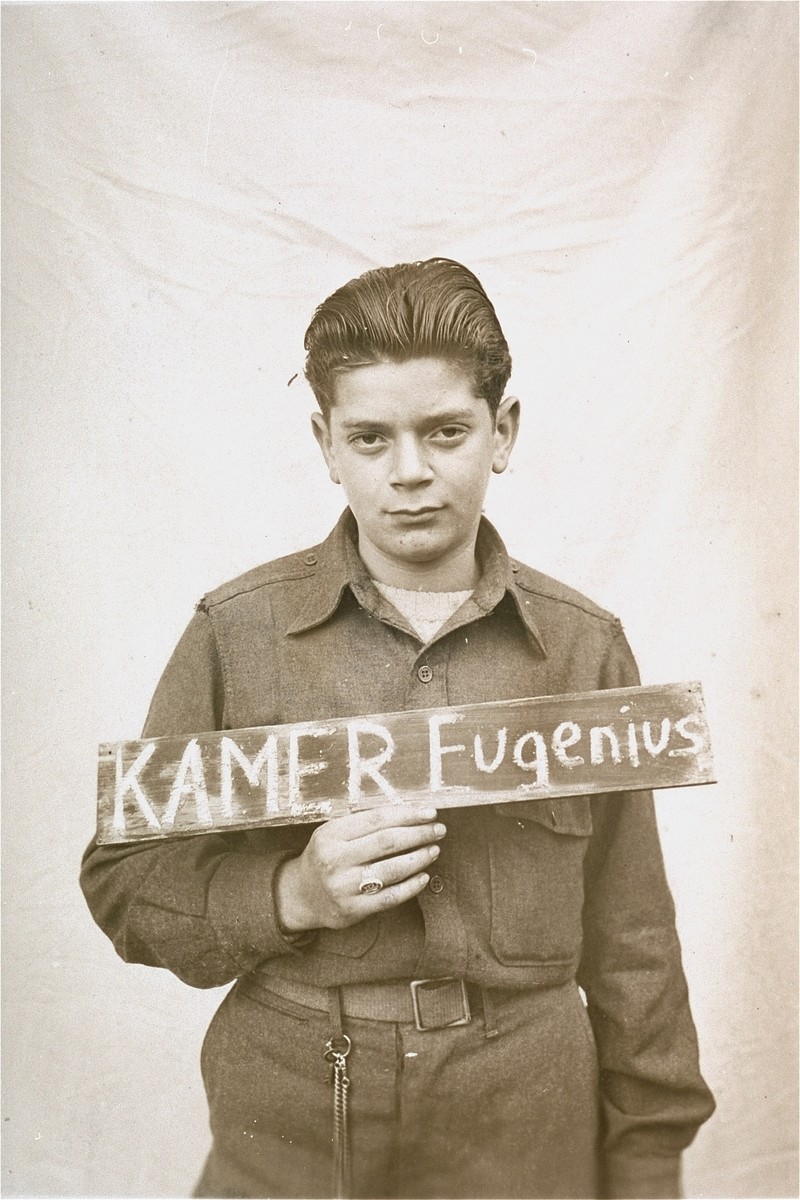 Eugenius Kamer holds a name card intended to help any of his surviving family members locate him at the Kloster Indersdorf DP camp. This photograph was published in newspapers to facilitate reuniting the family.

[Sources: Fischer, Greta. Oral testimony, USHMM Archives
Koenigseder, Angelika/ Wetzel, Juliane. Lebensmut im Wartesaal, Fischer Verlag, 1995, p.256.; email by German researcher Anna Andlauer]
Biography
Eugene Kamer was born in Kraków on June 9, 1930, to Abraham David “Romek” Kamer and Anna (née Metzendorf) Kamer. Much of the information about Eugene’s wartime experiences described below is paraphrased from his unpublished memoir, My Name Was Gienek, which Eugene dictated to his wife, Silvia, before his death in 2007.

Abraham owned a company that sold flour to businesses in Kraków. The family lived in an apartment outside the Jewish quarter at Lubomierska Street 5. Every day Eugene walked to the Jewish quarter to attend school, where his favorite subject was geography and where Polish and Hebrew were taught. In 1939, after witnessing the ongoing tension in Kraków, Eugene’s parents and his uncle Morris decided to flee towards Poznan in Morris’s car. In the ensuing chaos, Eugene’s parents changed their minds and decided to return to Kraków. Upon their return they found that tension had only grown in their absence. German authorities had issued a statement requiring all Jewish citizens to leave Kraków or go to the ghetto. Abraham decided to leave Kraków once again and this time headed for Skawina. In the summer of 1941, Anna and Abraham decided that Eugene should be sent to live with non-Jewish Poles who were friends of the family, the Bartoniczeks. Eugene did not want to leave his parents, but they insisted that it would be safer for him. Eugene tearfully said goodbye to Abraham and Anna. Unfortunately, this would be the last time he would ever see his mother.

Eugene stayed with the Bartoniczek family for a month. Growing fearful of the consequences if the Nazi authorities in Kraków found out that the family was hiding a Jewish boy, Mr. Bartoniczek contacted a second cousin of Abraham’s, who smuggled Eugene into the ghetto one evening. One day his cousin told him that his father had been picked up by German authorities and was working at the Kraków-Plaszów labor camp. On Friday afternoons some of the prisoners in Plaszów walked in columns from Plaszów back to the ghetto. Eugene went to a gate in the ghetto one Friday and was thus reunited with his father. Abraham told Eugene that his mother had been taken away from Skawina in a truck with women, children, and the elderly. Abraham had been separated from Anna and was chosen for forced labor. Not wishing to be separated from his father, Eugene begged to go with him to Plaszów. At first, Abraham refused, but eventually he changed his mind. Abraham and Eugene both went to Plaszów to work. One of Eugene’s first labor assignments was to help bury the bodies of prisoners who had been shot while trying to escape. He was 11 years old. This was the first time he had seen a dead body. Later he peeled potatoes and carried cement. He remembered his uniform being thin against the harsh winters in Plaszów. Once his shoes were worn through he used his shoelaces to tie rags around his feet. As a result, he suffered from frostbite, especially on his big toe on the left foot, which remained painful for the rest of his life.

In 1943 Eugene and his father were transferred from Plaszów to Skarzysko-Kamienna, where Eugene laid railway tracks and was assigned to assist in the production of armaments and ammunition under the direction of the Hugo Schneider Aktiengesellschaft (HASAG) Metalwareanfabrik company. Eugene and Abraham were also assigned to work in the ballistic testing area, where Eugene witnessed a mass execution of women and elderly men who were shot at the edge of a large pit. Once the victims were machine gunned, their bodies fell into the pre-dug hole. Eugene and his father were later assigned to pick up the machine gun shell casings and other debris around this mass grave.

In April 1944 Eugene and Abraham were transferred by train to a camp in Czestochowa where they were assigned to work in a steel mill. Here, Eugene loaded steel onto hand wagons and dug trenches for potatoes. Father and son were later transferred to Buchenwald in January 1945. Eugene remembered his arrival in the snow-covered camp on a dark and cold winter’s day. His work assignment in Buchenwald was to march to the nearby city of Weimar, Germany, where he and other prisoners swept the streets. Abraham and Eugene were later transferred to the Flössburg, a subcamp of Buchenwald, also in Germany.

As the Allied forces advanced on Flössburg, camp administrators attempted to evacuate as many of the prisoners as possible. Eugene was ushered into one train car and Abraham into another. The train’s final destination was the Mauthausen concentration camp. When the prisoners were escorted out of their cars, Eugene couldn’t find Abraham amongst the other prisoners. At first, he was elated because he thought his father had been able to escape. However, when he told another prisoner who had been on his father’s train car this theory, the prisoner told him that Abraham had been murdered on the train by Ukrainian prisoners of war over a piece of bread he had been hiding. Eugene was devastated at the thought that his father was gone. On May 5, 1945, Eugene was liberated from Mauthausen by American troops.

After receiving the news of his father, Eugene had almost given up his will to live. Weakened by starvation, he could barely eat. He later joined a group of other young survivors who decided to stick together. Occupation authorities told them that they would soon be transferred to a town called Regensburg in Bavaria. When they arrived in Regensburg they were approached by an American MP who started asking them questions in English. The children were afraid to admit that they were Jewish and feared that the man would take them back to the camp. He then started speaking to them in Yiddish, and they realized that he, too, was Jewish. This MP escorted the children by jeep to an apartment complex near the Danube River. Here Eugene and the other children met another American MP, Julius Abrams. Abrams told the German residents of the apartment building that they needed to take the children into their homes and care for them or there would be consequences. He would supply them with food for the children, but the German residents were to provide shelter and meet any other needs.

Eugene had never mentioned being transferred from a private home to the Kloster Indersdorf children’s center, where this photo was taken, but he did recount his relationship with the American soldiers who visited the orphan children there, often bringing gifts of candy. He especially remembered Julius Abrams coming to visit them frequently. The American GIs who had become friends with the children were eventually sent home to the United States. Eugene remembered the sadness they all felt when the soldiers left. Soon after, Eugene started to cough heavily and eventually became very ill. Delirious with typhus he arrived in the tuberculosis hospital in Munich but had no memory of how he got there. He later learned that his friend and fellow child survivor, Henry, had taken him by train to the hospital. While in the hospital Eugene received the first news from relatives. His aunt and uncle in Hoboken, New Jersey, started sending him packages with food, candy, and cigarettes. The cigarettes he traded for a watch and other items. Relatives in Cuba also began sending Eugene money and packages.

Eugene immigrated to Cuba in 1947 to live with his aunt, uncle, and cousin. He quickly learned Spanish and started working in his uncle’s general store in Santa Clara. After his move he fell out of contact with most of the other children except for Abram Warszaw, now Alec Ward of London. Eugene met his wife, Silvia, in Cuba. They were married on March 29, 1958. Silvia gave birth to their two daughters, Ana and Laura, in Cuba. The family immigrated to the United States in 1961 and settled in Baltimore, where Silvia and Eugene’s third child, David, was born.

Eugene owned a gas station and auto repair shop in Baltimore as well as a series of small businesses dedicated to manufacturing playground equipment and park benches. Sadly, Eugene passed away in 2007, and Silvia died 11 months later.