Bruno Meier holds a name card intended to help any of his surviving family members locate him at the Kloster Indersdorf DP camp. This photograph was published in newspapers to facilitate reuniting the family. 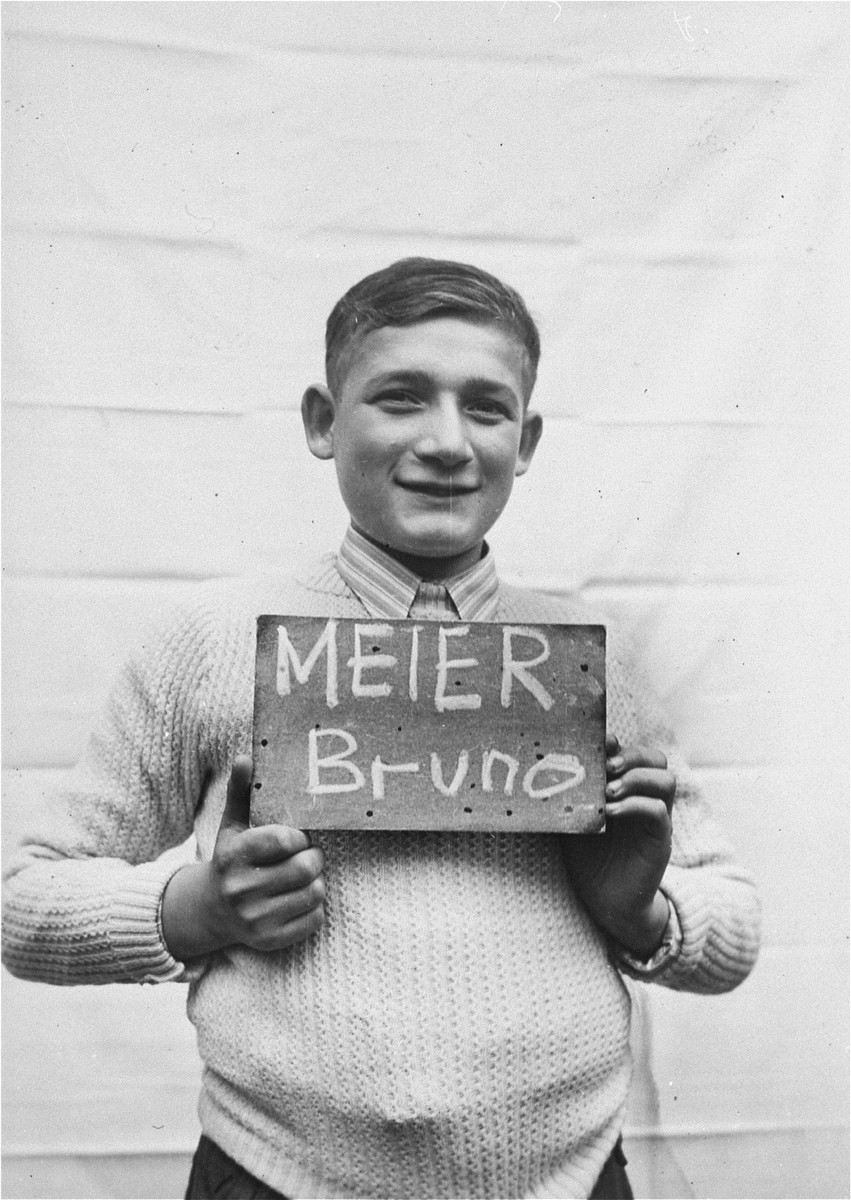 Bruno Meier holds a name card intended to help any of his surviving family members locate him at the Kloster Indersdorf DP camp. This photograph was published in newspapers to facilitate reuniting the family.

[Sources: Fischer, Greta. Oral testimony, USHMM Archives
Koenigseder, Angelika/ Wetzel, Juliane. Lebensmut im Wartesaal, Fischer Verlag, 1995, p.256.; email by German researcher Anna Andlauer]
Biography
Bruno Meier was born in Gambach, Germany, in 1928 or 1929, He was one of three children. His parents later divorced, and his father immigrated to the United States. Bruno’s mother, Elsa, is believed to have perished in Izbica. His sisters Paula and Renate were sent with him to Theresienstadt in 1942. They were then sent to Auschwitz, where the girls were killed. In January 1945, as the Soviets were advancing, Bruno was among a large number of prisoners transferred to Mauthausen in Austria. There he remained to recuperate from illness after liberation.

After the war, Bruno eventually made his way to Kloster Indersdorf. He knew his father was still living, but he did not know where he was or how to reach him. On October 31, 1945, he was part of a group of boys who were sent to England from Kloster Indersdorf. He worked there as a butcher and met his wife, Sylvia, at a dance. His best man at their wedding had been one of his fellow prisoners at Mauthausen. Bruno and Sylvia had a daughter, Maureen, and Sylvia was pregnant with their son, Bernard, when Bruno died. Bruno is remembered as a kind man who worked hard to create a new life for himself after losing so much.

Bernard and Fran have lived in the United States for 27 years. Several years ago, knowing very little about Bruno, they undertook a search to see what they could learn. They visited the cemetery in England where he was buried and travelled to his birthplace in Germany. They report that the town historians in Gambach were very helpful as they worked to learn what they could about Bruno and his family. It is important to them that their children understand who their grandfather was and what he experienced during the Holocaust.