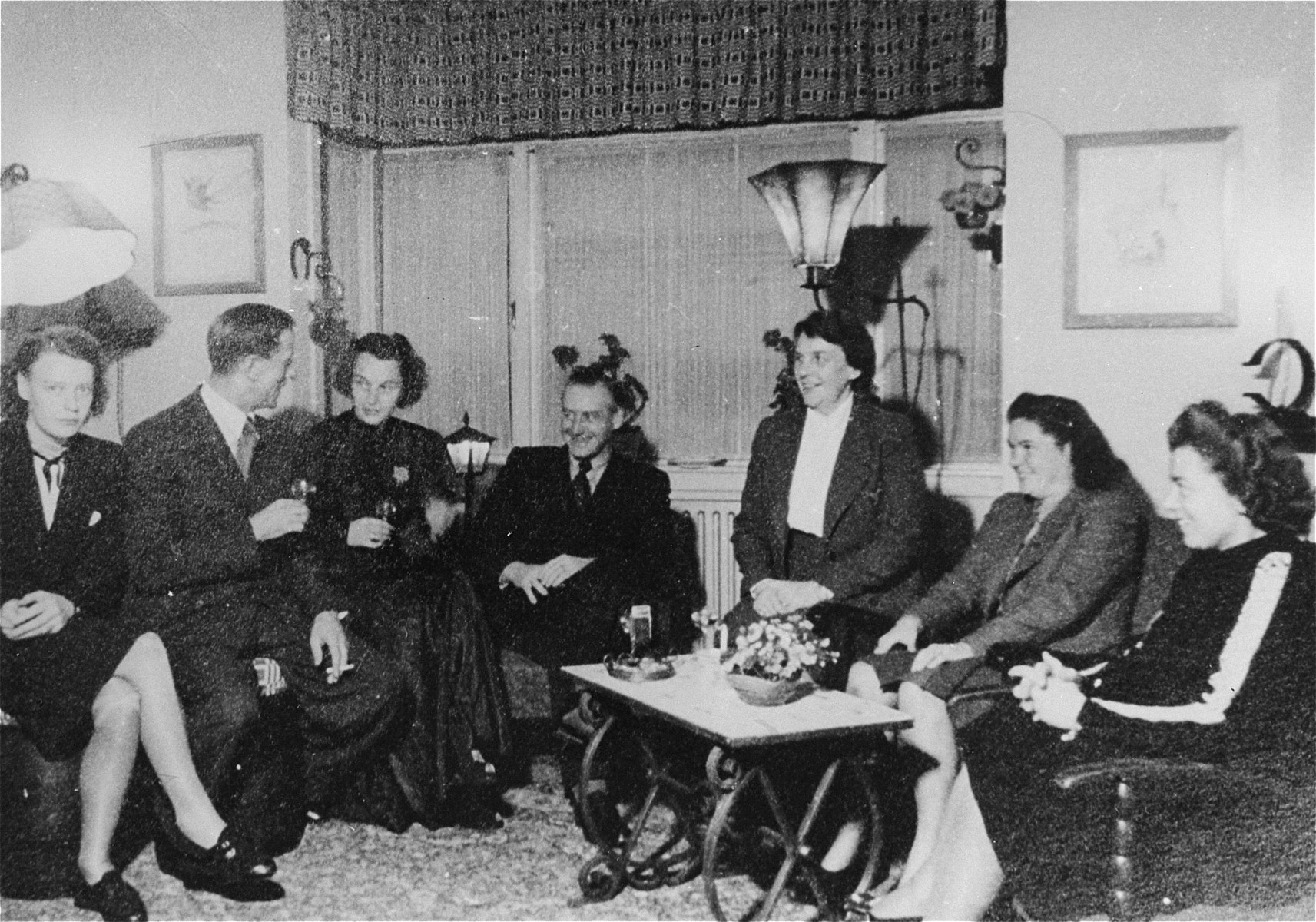 Pictured from left to right are: Frau Winkelkaemper (secretary of Ferdinand Hugo Aus der Fuenten), SS-Haupsturmbannfuehrer Ferdinand Hugo Aus der Fuenten (Head of the Central Office of Jewish Emigration in Amsterdam), Elisabeth Helena Hassel-Muellender (Gemmeker's mistress) and Gemmeker. The three women at right are unidentified. At the time this photo was taken, Gemmeker had only been commandant of Westerbork since the previous October. He therefore arranged for a banquet to be held at Westerbork in celebration of both Christmas and his new position.

https://encyclopedia.ushmm.org/content/en/article/westerbork.
Biography
Albert Konrad Gemmeker (b. 1907), commandant of the Westerbork internment and transit camp in The Netherlands. Gemmeker was born in Duesseldorf, Germany to a family of modest means. He left school at the age of 14 and found work at an insurance firm, where he was employed until 1920. After Gemmeker became disenchanted with his life as an insurance salesman, he decided to become a police officer and enrolled at the police academy in Bonn, from which he graduated with the rank of sergeant. After the Nazi seizure of power in 1933, Gemmeker saw an opportunity to advance his career and applied for membership in the NSDAP (which he obtained only in 1937). In 1935 Gemmeker secured a position in the Gestapo, and in 1937 he applied for membership in the SS. After finally being accepted in 1940, he was given the rank of Obersturmfuehrer. In August of that year, Gemmeker was assigned to a post in the personnel department of the SIPO and SD leader in The Hague in Holland. There he remained until June 1942 when he was put in charge of an internment camp in southern Holland. The following October, at a time when the deportation of Jews from Western Europe was gaining momentum, Gemmeker was appointed commandant of the Westerbork internment and transit camp. He retained this post from mid-October 1942 until the liberation of the camp by Canadian troops on April 11, 1945. After the war Gemmeker was imprisoned in Holland and finally brought before a Dutch Special Court in 1949. He was found guilty by the court and sentenced to ten years in prison.

Rudolf Werner Breslauer, was a German Jew from Munich who was given permission to photograph daily life in the Westerbork concentration camp by commandant Albert Gemmeker. Breslauer had attended the Academy of Art and Photography in Munich before fleeing to Holland with his wife Bella and three children in 1938. Settling first in Leiden, Breslauer was employed by the Koningsveld Press. The family moved to Utrecht in 1941, and all were arrested there in February 1942. They were sent to Westerbork, where Breslauer was initially employed taking identification photos. He subsequently requested permission from Gemmeker to document life in Westerbork, and was given a Leica camera to do so. He continued this project until he and his family were deported to Theresienstadt on September 4, 1944. Breslauer was sent on a transport to Auschwitz on October 24, 1944 and was killed immediately. The rest of his family followed two days later. Only his daughter Ursula survived.