The bodies of civilians executed by the German army hang in the Pancevo city cemetery. 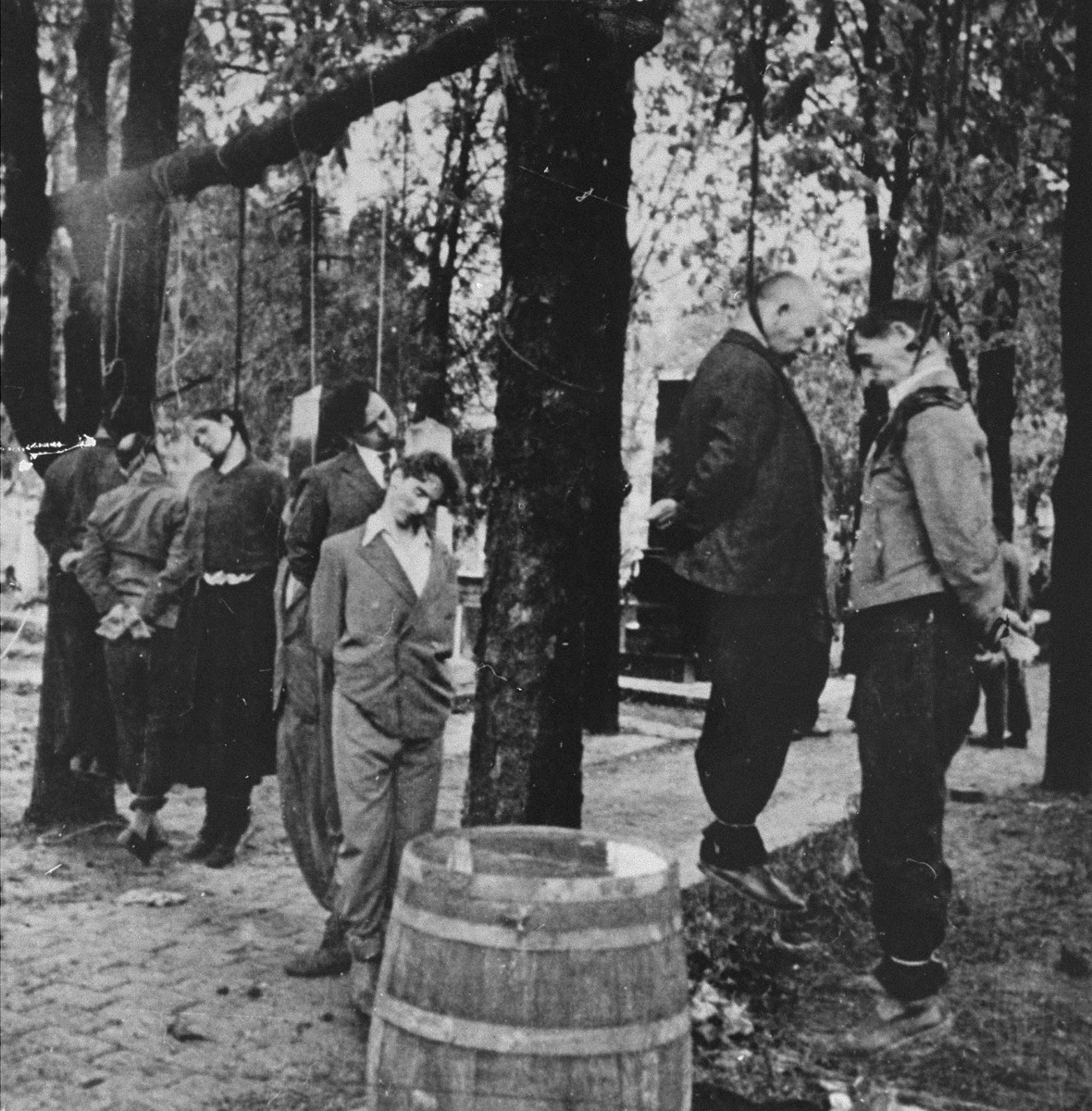 The bodies of civilians executed by the German army hang in the Pancevo city cemetery.

The woman, whose body is hanging in the middle of the group, owned a restaurant under which the Germans found a tunnel that led to the cemetery and was the suspected escape route for the sniper.

On the back of the photograph, there is a caption in German handwriting: " (2) The woman was the owner of the restaurant from which a secret passage [660 feet] long led to a cemetery, it passed under the street and ended in a chapel. Then the German soldiers were shot at night from the cemetery. All the hanged ones had been caught in the cemetery." Captions on the back of photographs, such as this one, taken by a German military photographer attached to a propaganda unit, were usually supplied by the photographer himself.

Event History
The action was carried out on orders from the city commander, Lieutenant Colonel von Bandelow, in reprisal for the killing of 4 German soldiers by civilians on 18 April 1941. Altogether 22 civilians were hanged in the cemetery, while 18 more were publicly shot against the cemetery wall by troops with the "Grossdeutschland" regiment.

https://www.ushmm.org/wlc/en/article.php?ModuleId=10007886. https://www.ushmm.org/wlc/en/article.php?ModuleId=10005456.
Biography
Gerhard Gronefeld (1911-2000), German photographer, who, as a member of the propaganda company in the German army during World War II, documented German atrocities in Yugoslavia and Poland, and, as a postwar photographer, documented the rebirth of the Berlin Jewish community. Gronefeld grew up in Berlin where his father worked as a pharmacist. From a young age he was involved in photography and competed successfully in photo competitions. In 1931 he went to study journalism at the University of Berlin but dropped out after two semesters in order to make money. For one year in 1935-36 he worked at the studio of Heinrich Hoffmann (the official photographer of the Nazi party), and was among the photographers who covered the 1936 Berlin Olympics. That fall, however, he was fired for refusing to join the Nazi party. Later he got a position as a photo journalist for the "Berliner Illustrierte Zeitung" (Berlin Illustrated Newspaper), where he increasingly specialized in military reporting. With the outbreak of World War II, Gronefeld enlisted in the Propaganda Company of the German army and was posted as a war reporter to Belgium, France, Poland, the Balkans, and the Soviet Union. For a time he held the privileged status of a Sonderberichterstatters (special reporter). In that capacity he documented military cleansing operations and reprisal actions, such as those undertaken in Pancevo, Serbia, and Jasionowka, Poland. Gronefeld survived the war and immediately afterward took up his camera to photograph the destruction and reemergence of life in Berlin. Impressed by his postwar photos that were published widely, the new president of the Berlin Jewish community hired Gronefeld to photograph the return of Jewish survivors and the resurgence of the Berlin Jewish community. In 1950 Gronefeld moved to Munich. He continued to publish in a variety of German magazines including the "Neue Berliner Illustrierte," "Life," "Heute," "Stern" and "Quick." Among his themes in the 1950s and 60s was the German economic miracle. In his later years he specialized in animal photography and produced several books on this theme.