A note written by a Christian woman (Maria Dawelec) who saved Tammy Lavee by placing her, at age two and a half, along with this note and a cross, in the backyard of a monastery. 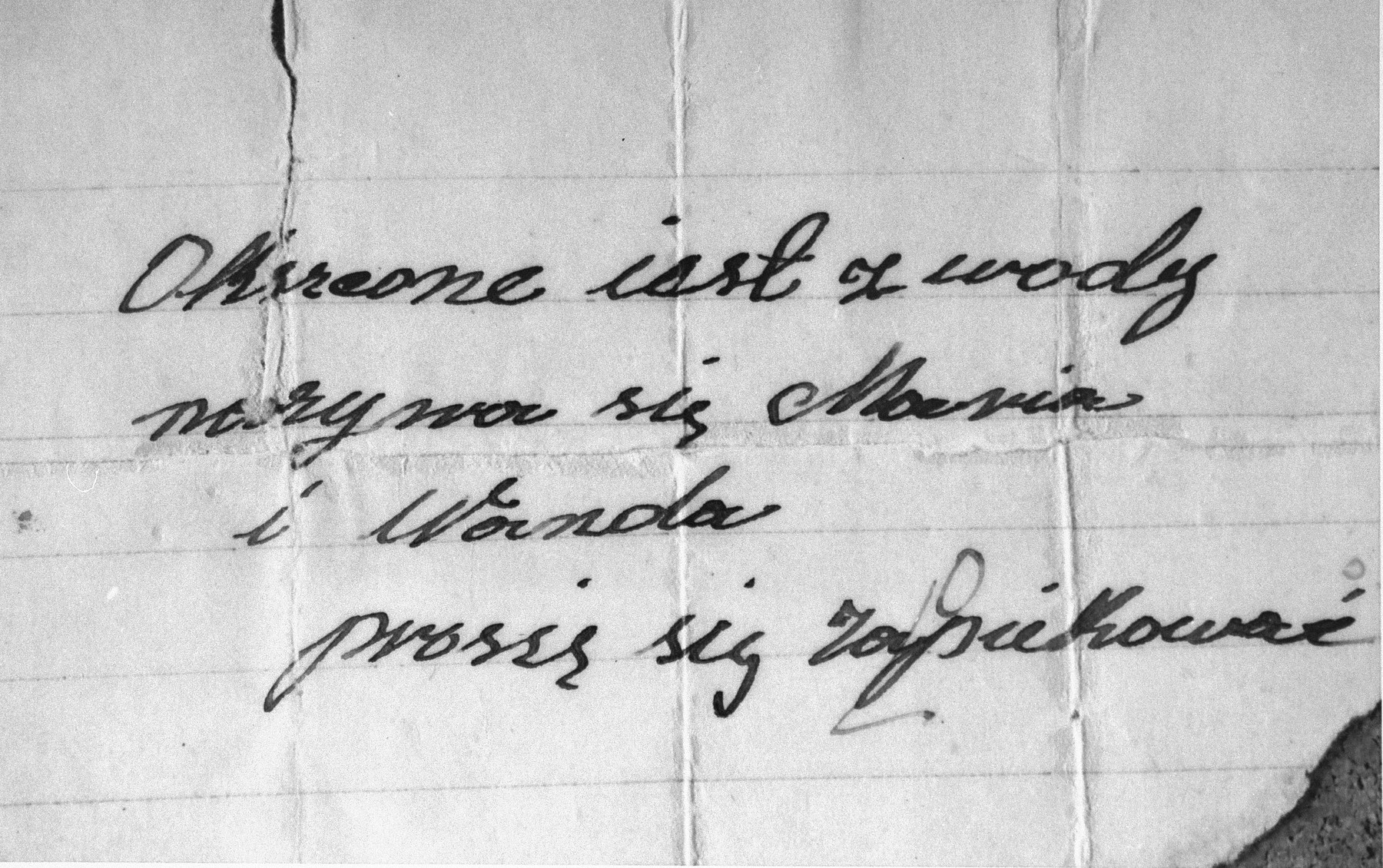 A note written by a Christian woman (Maria Dawelec) who saved Tammy Lavee by placing her, at age two and a half, along with this note and a cross, in the backyard of a monastery.

Tammy was later taken to an orphanage in Lodz by the Coordination Committee. The note reads: Baptized, Mania and Wanda. Please take care of them.

Biography
Tammy Lavee (born Tammy Blass) is the daughter of Hanka (Anka) Czarna Blass (b. 1904 Wloclawek) and Gedalyahu (Eugene) Blass (b. Mlawa ca. 1909) accountant at a meat factory. Tammy was born on December 15, 1939 and had one brother Yerachmiel Rysio (b. ca. 1936). In December 1939 Tammy's family, a total of ten members including her parents, her brother and grandparents as well as aunts and uncles and a cousin were put on a deportation train from Wloclawek to Zamosc. Hanka was pregnant at the time, and possibly due to the stress, she began to have contractions while the train was passing through Warsaw. Hanka became hysterical and asked to get off the train together with her husband. When a German SS saw her husband descend he forced him back on the train. When Hanka screamed he was her husband, he then threw her son out of the train at her but her husband remained behind. It is not clear where or how Tammy was born. It is possible that her mother reached some cousins in Warsaw who were related by marriage.

The remaining members of the family on the train arrived in Zamosc and were put into the ghetto. They remained together until Tammy's grandparents were sent to concentration camps or the gas chambers of Belzec.

In 1940 a 14 year-old cousin who had been with them on the train decided to leave Zamosc and return to Warsaw. There she found Hank, Tammy and Rysio staying in someone's kitchen in Warsaw. She could not believe they were alive. She told Hanka that everyone was still together in the ghetto. Hanka decided she would rather be with family than alone in Warsaw so she left for Zamosc to join her family in the ghetto. Hanka began to work in the ghetto kitchen where she met a Christian woman in her early twenties, Maria Pavelez. Maria worked in the ghetto but returned home every night. Hanka realized that she had to get Tammy out of the ghetto if she was to survive and asked Maria to take her as Tammy had blue eyes and blond hair. Her mother obtained false Aryan papers for herself. Soon after Tammy went to Maria some neighbors informed the SS that an unknown child was staying there. The SS came and interrogated Maria who claimed the child was her niece, and in fact Tammy called her "auntie" in front of the SS guards. Still Maria became scared and decided to get rid of Tammy. She wrote a note saying the child had been baptized and her name was Wanda Maria. She then sewed it in a tiny envelope and pinned it on Tammy's dress and put a cross on her. In the afternoon she pushed her into the yard of a convent where Tammy began to cry. A nun heard her and came out and took her in. Tammy remained there until the end of the war, some 2 -2 ½ years.

After the war the monastery asked the local population to take in orphans. A religious family from Izbica by the name of Shemanksy had one son and wanted another child. Tammy remained with them until 1948. Then the Coordinatzia Committee, who were looking for Jewish children, came to claim her. By that time Tammy considered these people her family and she called the head of the house hold "mother". However the Committee members talked to her, told her she was Jewish and that she had to leave.

In February 1948 when Tammy was 7 years old she was taken to the orphanage in Lodz and given the name of Wanda Czarneska. In 1949 Nina Cunge, who was born in Lodz came from Israel looking to take in a foster child who was affected by the war. Her own mother had perished in Treblinka and she thought this was a way of commemorating her life. In 1949 Tammy left with her to Israel. Unfortunately Tammy was not happy and at the age of 16 left to live on Kibbutz Beit Alfa and then Ramat Hakovesh. She also studied at the Oranim teacher's Seminary for two years until she was called up for the army. She married in 1962 in Haifa.


In 1988 Tammy discussed her story on Israeli radio. The program was heard by her cousin, Lucia Mastbaum that realized that she was the baby she had seen in Warsaw. She contacted Tammy and together they were able to piece together the story of Tammy's birth and survival. Only then, 40 years after arriving in Israel, did Tammy find the two notes that were given to her foster mother, Nina Cunge by the Coordinatzia Committee which indicated where Tammy had been hidden, the name of the monastery and her true name.